President Trump’s approval ratings are on the rise since the release of the Mueller report – with CNN begrudgingly admitting the percentage of people who approve of how Trump is handling the economy “is the highest number we’ve ever seen.”

In other polls, Trump has made significant gains amid the lowest unemployment rate in nearly 50 years and a 3.2% increase in seasonally adjusted hourly earnings over last year.

A Gallup poll released on Friday reveals that Trump’s approval ratings are at all time highs, with 91% approval among Republicans – near all time highs. 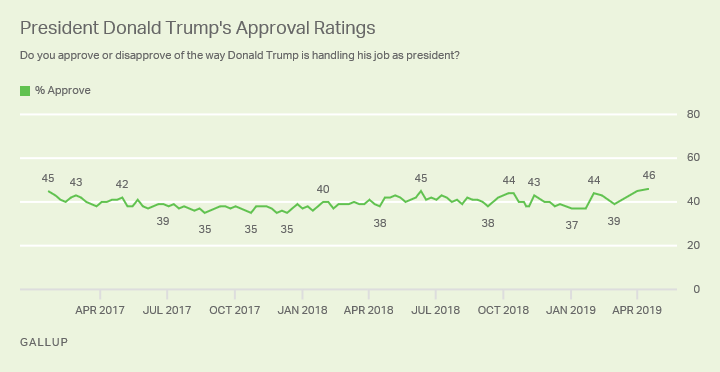 Among Democrats, Trump has a 12% approval rating, up from 4% in March.

And what did Joe Biden use as his opening pitch?

The former Vice President called the Trump administration “an aberration” during a 2020 campaign event in the eastern Iowa city of Dubuque.

“Limit it to four years,” Biden told a ballroom crowd of 600 according to the New York Times. “This is not the Republican Party,” Biden added, citing “my Republican friends in the House and Senate.”

Translation; Trump is a giant, ongoing threat to the Uniparty (as Steve Bannon calls it).

There are plenty of liberal and conservative elites who insist Trump doesn’t ~really~ represent his party when pretty much every available data point about Republican voters says the opposite. At some point it becomes wishcasting.

Put another way: Donald Trump represents the Republican Party about as well as Barack Obama represented the Democratic Party. Which is to say very well.

Biden’s decision to suggest that Trump is the problem while extending an olive branch to Republicans has “exposed a significant fault line in the Democratic primary,” as the Times puts it.

Democrats, like Senators Bernie Sanders and Elizabeth Warren, see the president as a symptom of something deeper, both in a Republican Party overtaken by Trumpism and a nation cleaved by partisanship. Simply ousting Mr. Trump, they tell voters, is not enough.

It’s a debate that goes beyond the policy differences separating a moderate like Mr. Biden from an insurgent like Mr. Sanders, elevating questions about whether the old rules of inside-the-Beltway governance still apply. And it has thrown into stark relief one of the fundamental questions facing the Democratic electorate: Do Democrats want a bipartisan deal-maker promising a return to normalcy, or a partisan warrior offering more transformative change? –New York Times

It seems the Times agrees with Democrats like Sanders and Warren, as the report notes that “Trump has tightened his grip on the party, installing loyalists in key positions and commanding fealty from Republican candidates as some of his loudest Republican critics retired rather than face electoral defeat.” The Times also notes that many Congressional Republicans have voted “almost in lock step with the president, even as he cast aside longstanding party orthodoxies, such as free trade, and sought to exert his will on traditionally nonpartisan institutions like the Federal Reserve and Justice Department.”

In other words, even if Trump doesn’t win in 2020, ‘Trumpism’ has taken over.

Biden’s pitch, however, is that he’s an “electable pragmatist who can reach across the aisle.”

John Anzalone, a Democratic pollster who has previously advised Mr. Biden, said it should be no surprise that bipartisan appeals sell, even in a party primary. “Guess what,” he said. “Democratic primary voters agree with the fact that a Democratic president should work with Republicans to get things done.”

“There is this narrative about Democratic primary voters that they’re all about anger and the fight, or principles,” Mr. Anzalone added. “But real voters know one thing: If anything is going to get done to help them, it’ll have to be done across party lines.” –New York Times

US Military Surrounding Venezuela With New Deployment In Guyana

David Stockman: The Biggest Threat To Your Prosperity And What You Can Do