In light of today’s shocking update from Trump’s twitter account on the true state of trade war, one which confirmed what we said all along, namely that there is no deal coming any time soon, some are wondering if that record short in VIX futures that has quickly since the start of the year and now amounts to 180K net spec shorts, is about to lead to a VIX explosion a la Feb. 2018 amid a Volkswagen-like short squeeze.

Maybe, but also maybe not.

As a reminder, we were the first to point out in “A War Has Broken Out In The VIX Complex” that even as massive VIX futs piled up on the short side, the vega of vol ETPs was approaching an all time high, and in fact, according to the latest update, was indeed at a record level. 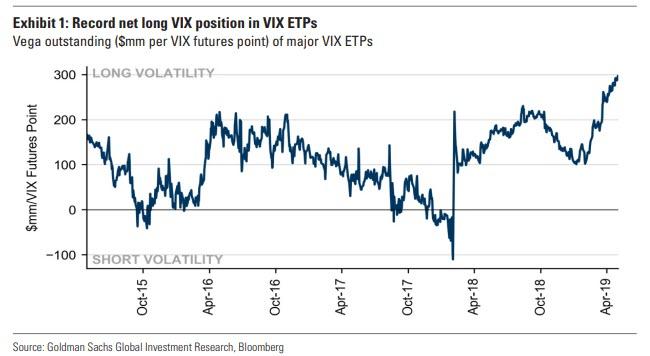 Now, superficially, there is a kind of a symmetry around this divergence, one which has managed to confuse not only the more chronically clueless members of the fintwit echo chamber, but apparently the likes of Goldman Sachs’ derivatives expert, Rocky Fishman.

And speaking of Fishman, on Friday, the Goldman strategist published a “Q&A on the VIX ETPs’ record long positioning“, in which he laid out some of the core basics, including his calculation of the ETP sector’s sensitivity to VIX moves, or vega. In a nutshell, Fishman echoes what we said three weeks ago, and notes that “the net position of the ETPs is more long than ever before, with almost $300mm of exposure per VIX futures point. The TVIX (2x levered VIX ETN) is currently the largest ETP by AUM and largest by far by total VIX futures exposure. The TVIX and the newly-renamed VXX (formerly VXXB) have each received around $1bln of inflows year-to-date (though each has a market cap below $1bln due to negative performance). The growth in long VIX products and the lack of interest in short VIX products both reflect defensiveness by their investors. With the beta of VIX futures to the SPX at about 3 times and the weighted VIX future close to 16, this position is similar in magnitude to a $15bln short position in SPX futures. 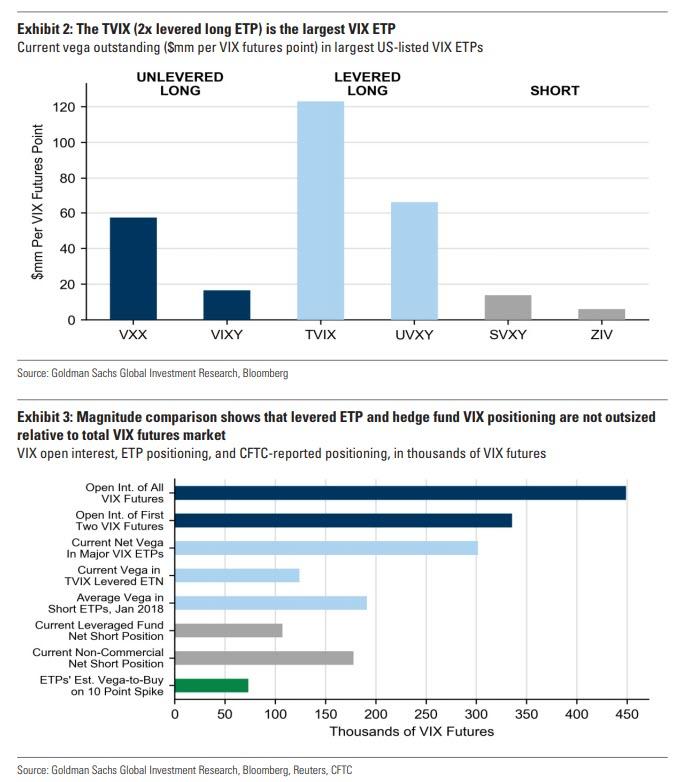 Incidentally, and Fishman is correct about this, the current layout in vol ETP land is a mirror image of the record short position ahead of the Feb 2018 volatility explosion, while hedge funds were modestly short VIX. 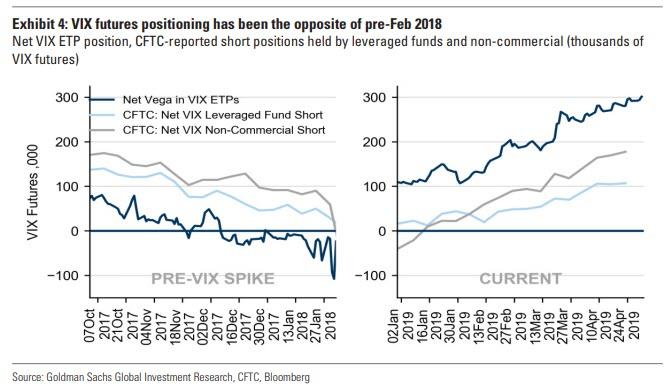 Where we disagree with Fishman, is his dismissal of the record short VIX position which, as shown in the top chart, is certainly a concern to anyone who is short the VIX index, and may be caught in a massive short squeeze (assuming there is one).

The crux of Fishman’s argument is his outright dismissal behind the record VIX short, which he claims is simply “because VIX ETPs have a record long position.” Actually, that’s not true, but let’s hear Rocky out: according to the Goldman strategist…

… futures contracts are a zero-sum market – for every future one investor is long, another investor needs to be short a future. The CFTC provides two different reports on VIX futures that both show positioning that adds up to zero, as the sum of the positions of long investors is the mirror image of the position of short investors. We find the Traders in Financial Futures report to be the more informative of their reports, and its Leveraged Funds category (which generally consists of hedge funds) has had a growing short VIX position to offset ETP issuers’ long positions (predominantly reporting in the Dealer category). The Legacy report’s Commercial category for VIX likely consists mostly of ETP issuers, so its Non-Commercial category likely represents everyone else. With VIX futures at a record long, the rest of the investor universe is at a record short. We believe that much of that short VIX futures position is in hedged and relative value structures, rather than in outright short volatility. 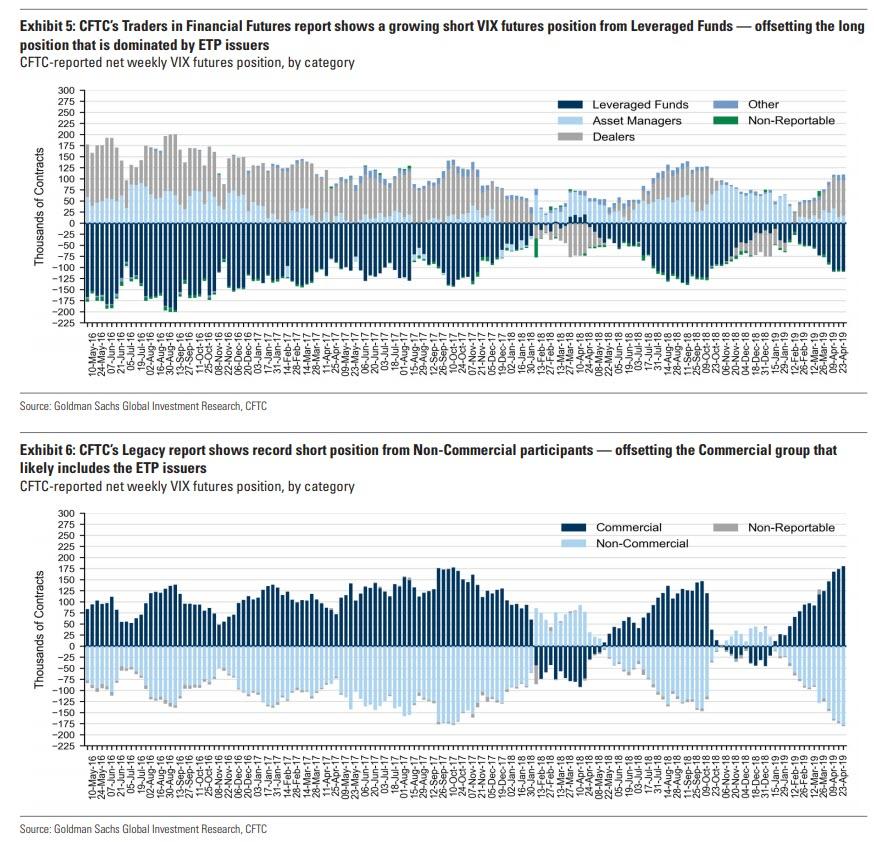 In theory, Fishman is of course, correct that non-commercials always, by definition, offset commercials. Where he is wrong, is assuming that commercial specs are by definition rolled into the ETP umbrella. This, as so many examples in the past have demonstrated, is patently not true, and instead the variance of futures vs ETF/ETP products has everything to do with investor types, the first being the preference of institutional investors due to their liquidity, the former being the pick of retail investors due to its low cost.

Refuting Goldman, and confirming precisely this point is Deutsche Bank’s own derivative strategist Parag Thatte, who in his latest weekly flows report also observes the record divergence between VIX futs and VIX ETPs. This is how he lays it out:

Recent inflows of $2.7bn YTD to long vol products have driven vega outstanding across the VIX ETP complex to a record high of $255mn. At the same time, net short positioning in VIX futures contracts is also at a record high.

Thatte also lays out the best visual relationship between the two series, by charting the Vega of the ETP complex vs the non-commercial VIX net specs. Clearly, there is a correlation. 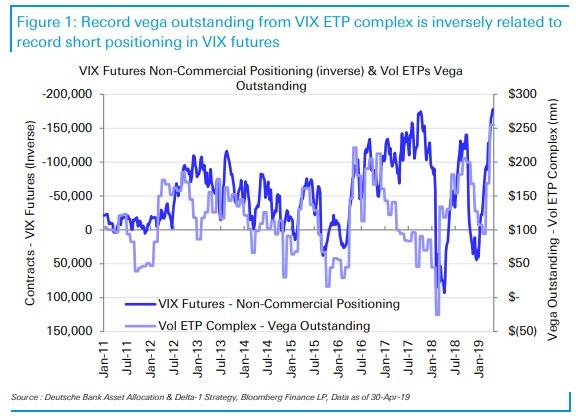 And this is where Goldman and DB’s takes on the chart above differ, because while Goldman finds the relationship to be a one to one net off, DB actually reads between the lines, so to speak, and points out that “the inverse relationship between positioning in the VIX futures market and Vol ETPs suggests that demand for long vol exposure from primarily retail investors is being recycled to institutional players, likely Hedge Funds, in the VIX futures market.”

In other words, and this is what Goldman fails to observe, is that it has all to do with the investor class behind a given vol position, as on one hand we have retail investors who have never been more long vol (ironically, they may end up being proven right very soon), while institutions, and hedge funds, are the shortest VIX they have ever been, perhaps simply because they missed the rally in stocks YTD, and have been scrambling to at least pick up some carry, and the easiest place to do that is by shorting spot VIX.

Of course, with enough shorts on board, the risk rises of a massive squeeze, only instead of one driven by retail investors as was the case back in 2018, this time it will be hedge funds that light the match.

Or maybe not just yet, because one place where both Goldman and DB agree on is that we are not at such extremes as we saw back in late January 2018. First, here is Thatte: 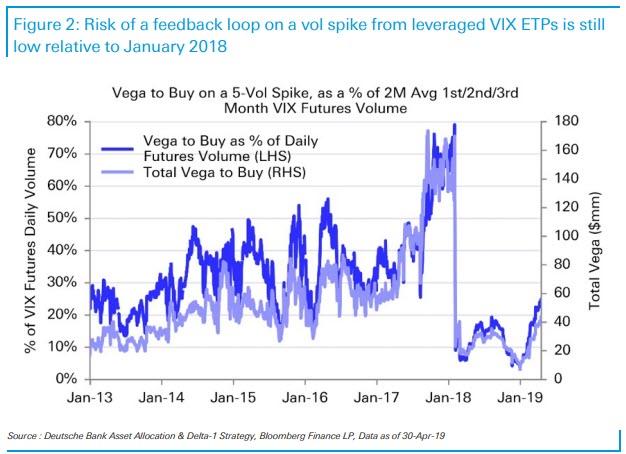 And here is Fishman, generally agreeing with Thatte:

When vol rises, both levered long and inverse VIX ETP issuers buy VIX futures, contributing to vol-of-vol. However, currently the size of that impact is benign. A quantitative analysis of ETP issuers’ need to rebalance should VIX futures spike sharply shows that the amount of VIX futures issuers would be economically driven to buy on a given volatility spike is around 1/4 of the amount they would have been driven to buy prior to the Feb-2018 VIX spike. Levered long ETPs do have the potential to be especially impactful on an escalating, multi-day VIX spike, because their exposure to VIX futures would be growing each day of the spike (unlike short ETPs which would be getting smaller each day).  VIX options’ implied volatility has risen recently, but is still not very high compared with its 2017-18 ranges, indicating that investors are not unusually worried about current positioning.

Could both strategists be wrong in their optimistic take on the broader implications of a potential VIX squeeze? Absolutely, and in fact, judging by the sudden waterfall in futures late on Sunday and surge in the VIX, now that the trade deal between the US and China appears to be dead, we may find out very soon just how wrong both Goldman and Deutsche may end up being.