It’s only appropriate that the S&P may be about to suffer its biggest drop of the year one day after hitting a new all time high.

For those who are only now catching up, the reason why futures are tumbling is that just after 12pm ET, Trump tweeted that trade talks – which according to the White House, media leaks and Larry Kudlow would be basically concluded by next week – are instead effectively dead, as the current 10% tariff will spike to 25% on Friday, while an additional $325BN in goods will be subject to new trade tariffs.

Some saw in Trump’s tweet a retaliation for Friday’s North Korea ballistic missile launch, the first since 2017, and one which would not have happened without the explicit blessing of Beijing.

Others were more nuanced, and Nomura’s Charlie McElligott writing late on Sunday that “either this is an epic act “rope-a-dope” posturing and poker-playing from POTUS to collect a (self-perceived) “better” deal “win” thereafter…as the 500-handle rally in Spooz has given Trump enough confidence to absorb a market drawdown and again “lean-into” what some in the administration believe is Chinese “slow-playing”—all in an attempt from to extract additional last-minute deal concessions, after last week’s reported negotiation setbacks—OR a raging ‘miscalculation’ with “vigilante” markets.”

For now it is looking like it’s the latter, with futures tumbling and the Emini down a whopping 55 points on Sunday night, shaping up as the third biggest intraday drop of the year so far.

Meanwhile, the (non-USD) FX markes is getting absolutely crushed, with China proxies such as the Aussie and Kiwi tumbling, because, as McElligott adds, the key risk is that the offshore Yuan (CNH) may tumble – which it is currently, plunging over 1.3%, or the biggest move since Jan 2016, “as market forces anticipate that China may allow the Yuan to weaken considerably IF they choose to retaliate (a big “IF”), following their prior perceived ‘goodwill’ controlling of the exchange rate within a tight band the past three months for trade negotiation purposes.” 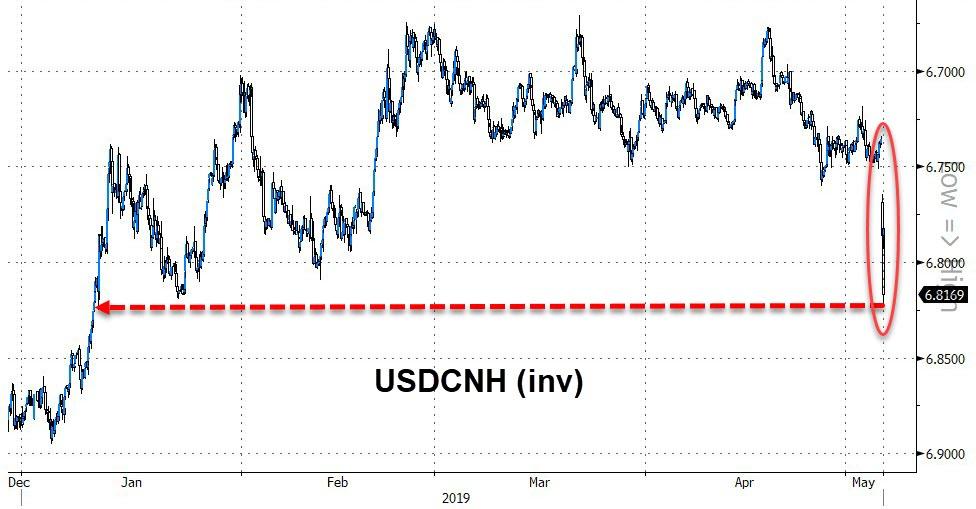 Meanwhile, in an attempt to prevent a Sunday rout, Goldman published a note after 6pm Eastern, in which the bank’s chief political economist, Alec Phillips, comments on Trump’s announcement that the tariff rate on $200bn of imports from China will rise from 10% to 25%, noting that it “lowers the odds of a successful conclusion to US-China trade talks and raises the odds of further tariff escalation. However, we think it is more likely that the increase will be narrowly avoided and believe the odds of tariffs increasing on Friday are 40%.”

Well, it may be time for Goldman to rename itself Gartman Sachs, because the digital ink wasn’t even dry yet on that note when the WSJ reported that China is considering canceling trade talks with the U.S. After Trump’s sudden, unexplained threats, adding that:

And while the WSJ was somewhat tentative in its reporting, reporter Edwards Lawrence was far more convinced that it’s pretty much game over: “Chinese Vice Premier Liu He has cancelled his trip to Washington this week for trade talks following a tweet by President Donald Trump threatening more tariffs because the talks have moved too slowly. “

Chinese Vice Premier Liu He has cancelled his trip to Washington this week for trade talks following a tweet by President Donald Trump threatening more tariffs because the talks have moved too slowly. #China #Trade #Breaking

So it looks like it is indeed likely that US-China trade talks may be about to implode (especially with Goldman’s “kiss”). Meanwhile, going back to McElligott’s note, this “unexpected” negative development couldn’t come at a worse time for investors, as after avoiding rushing into the meltup for over 4 months, “it was leveraged funds who were finally “forced in” last week (through start of week), covering $9B of SPX futures short positioning, while we also saw Macro Funds take up their “Beta to SPX” WoW, going from 11th %ile to now 51st %ile into the start of the week.  Tough timing.” Tough indeed, and here are some other “tough” observations: 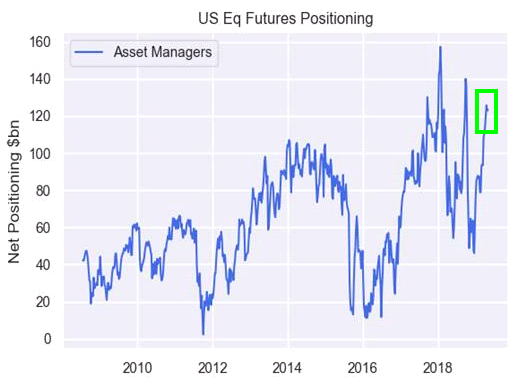 Finally, with the Emini back under 2,900 all eyes are now back on 2,890 – that’s both where dealer gamma turns negative again, selling begets more selling…

… and is also where the CTAs start dumping in earnest, as per these latest updated market triggers, according to McElligott:

For the TL/DR crowd: Steven Mnuchin better have the PPT on speed dial. 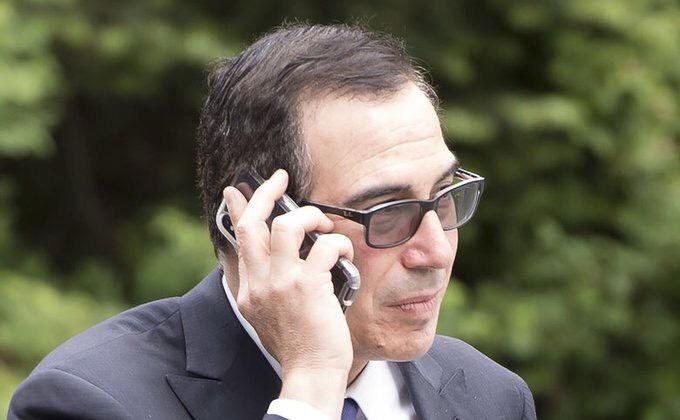