Sri Lanka has expelled more than 600 foreign nationals, including approximately 200 Islamic clerics since the Easter suicide bombings at three churches and three luxury hotels that killed 257 people and wounded nearly 500. 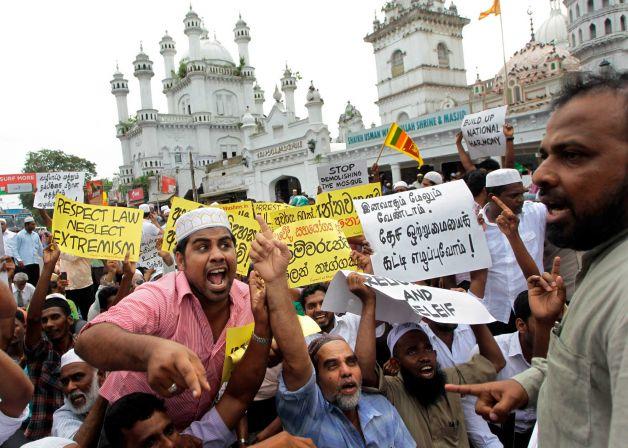 The attacks were led by a local Islamic cleric known to have traveled to India where he made contact with jihadis.

Home Affairs Minister Vajira Abeywardena said the clerics had entered the country legally, but amid a security crackdown after the attacks were found to have overstayed their visas, for which fines were imposed and they were expelled from the island. –Daily Mirror

“Considering the current situation in the country, we have reviewed the visas system and took a decision to tighten visa restrictions for religious teachers,” said Abeywardena, adding “Out of those who were sent out, about 200 were Islamic preachers.”

Police said that many of those expelled include foreigners from Bangladesh, India, Pakistan and Maldives who have overstayed their visas.

“There are religious institutions which have been getting down foreign preachers for decades,” Abeywardena said. “We have no issues with them, but there are some which mushroomed recently. We will pay more attention to them.”

Sri Lanka is overhauling the country’s visa police in the wake of the attacks, as authorities now fear that foreign clerics might radicalize locals for future attacks. A state of emergency was imposed after the attacks which give wide powers to police and troops in order to arrest and detain suspects for extended periods.

Authorities have been conducting house-to-house searches for explosives and radical Islamic propaganda.

Late last month, security forces exchanged gunfire in a battle with terrorists holed up in an Islamic State safe-house in the Muslim-majority town of Sainthamarudu in Sri Lanka’s Eastern Province after they were tipped off by a local Imam, according to BDNews24.

In a gun battle between the security forces and terrorists holed up in a van and the safe house, and following three explosions triggered by the holed-up terrorists on Friday night, 15 people, including six men, six women, and three children, were killed.

Two suspected terrorists, believed to be suicide bombers, have decamped and a hunt is on for them, police said.

The safe house in question was taken on rent by the followers of a Tawheed Jamaat led by Mohammed Zahran Hashim, who was influenced by the Islamic State.

Zahran was one of the suicide bombers who died in the Easter Sunday attacks on churches and hotels in Colombo. –BDNews24

Troops in the nearby town of Nintavur reportedly found an unregistered van belonging to Zahran’s brother-in-law, Niyas – while IS flags, literature and other objects were found during a raid last week in the Sammanthurai region. According to a Sri Lankan military spokesman, Brigadier Sumith Atapattu, combined troops also recovered explosives, detonators, gelignite sticks, acid bottles, suicide kits and military uniforms from the safe house.

Local Muslims report that they have opposed extremism:

According to the report, “The Muslims here, including the local mosque head, had completely rejected the extremist propaganda which Zahran’s group had been indulging in since 2017. Local people, including their social leaders and clerics, had complained about the Zahran group’s propaganda that non-Muslims have to be exterminated and that those dying in fights against Kafirs, would go straight to heaven,” said HM Ameer, head of the Abdul Jawad Ali Waliullah Trust.

“People had participated in demonstrations against the Zahran’s Tawheed Jamaat and its propaganda. I, along with 12 others, had filed a case against Zahran seeking a ban on his activities in 2017. I had met Ministry of Defence officials in Colombo with recordings of Zahran’s speeches and the literature he had produced. But all to no avail,” he added.

Of note, approximately 10% of Sri Lanka’s population practices Islam, while 70% of the country is Buddhist, as of 2011.

Rifthi Ali, a freelance journalist now in Sammanthurai  said that local people are livid with Zahran’s men for taking a house on rent and working against the interest of the landlord and the entire area.

“Muslims of Sri Lanka consider Zahran and his ilk to be fit to be driven out of Sri Lanka. If there was not such a feeling of discomfort with him, neighbours of the safe house and the local mosque head would not have told the police about the house and its occupants,” Ameer added.

Mohamed Shoib, a political commentator and a media advisor to Commerce Minister Rishad Bathiudeen, said that as recently as Jan 3 this year, the All Ceylon Jamiaythul Ulema (ACJU) had complained to the defence ministry about the activities of Zahran’s Tawheed Jamaat, through the good offices of the Governor of the Western Province, Asad Sally. But again to no avail he regretted. –BDNews24

According to Shoib, 99% opf Sri Lankan Muslims are “resolutely opposed to terrorism.”

Schiff: Only Impeachment Will Ensure A Free And Fair Election