Is the never ending rally ready to blast off or is it running out of steam setting up to finally correct? Let’s first separate facts from fiction.

Forget data and earnings, only 3 things truly mattered this past week: The Fed, the incessant efforts to verbally hype markets into a frenzy every single day (China, China, China), and magic risk free Friday once again saving the week into a marginally positive close with a magic gap, ramp and camp.

The result: Talk of a never ending rally and emerging narratives to support the very idea:

This is not me being facetious, these are actual headlines and phrases permeating the current investing landscape. Four months after a 20% correction which is now long forgotten. New all-time human history highs on $SPX and $NDX. Unemployment rate at 3.6%, the lowest in 50 years.

We’re killing it on the economy:

We’re killing it on the economy! 🔥 pic.twitter.com/hme0eihP9c

Party like its 1999, an almost circus like atmosphere. Let me humbly suggest: A true bull market would not require constant hyping and daily verbal neck rubs to push prices higher which bring us back to the question of sustainability of new highs.

I’ve called this the most jawboned rally in history, but it is rapidly devolving into the most hyped rally in history. And yet gains were modest. On the week $DJIA was actually down 30 points and $SPX gained 5 handles with a now standard closing squeeze in the last seconds of trading.

Things are so awesome let’s cut rates. No really, rate cut calls not only by the administration (think Kudlow, Trump and Pence,) but by the end of the week various Fed officials were sending the same message:

At this very moment in time:

Yes, some people just like to throw gasoline on a fire to see what happens.

Is the Fed still pretending to be independent? Succumbing to political pressure in December and caving on the balance sheet and rate hikes they suddenly seemed to fall in line with almost daily calls for rate cuts by the administration. While the Fed statement expressed neutrality Friday’s speeches sent a different signal.

Friday’s parade of dovish Fed speakers of course aided in damage control from Jay Powell’s slip-up during the week which produced a sizable dip courtesy one word: “Transitory” by Jay Powell. Another communication error and in process markets broke the 2019 up trends.

Downside was not scheduled to happen and hence pity was taken on good old Jerome Powell:

You have to feel sorry for #Fed Chair #Powell:
In his press conference, he again–inadvertently–found a way to turn a rather uneventful market reaction into notable price movements.
In December it was his emphasis on “auto pilot:” this afternoon, it was his use of “transitory.” pic.twitter.com/VqPwcmjrxo

My response to this: Reason to feel sorry? Why? Because markets reveal themselves to be entirely dependent on the Fed to be dovish 100% of the time?

Any slight hawkish hint and we sell off? What’s that say about the entire construct? A market beholden to central committee planning. On January 4 Powell’s “Flexible on balance sheet” speech caused a “notable price movement” of +3.4% on $SPX. Nobody felt sorry for him then. Are we to feel sorry for Fed chairs when their communications produce downside i.e. in December and this week?

Or a better point yet via Guy Adami:

I understand what you are saying @elerianm , but I find my sympathy aimed towards the 100 of millions US citizens that Fed policy has disenfranchised over the last decade. The wealth gap has never been greater, and the Fed is almost entirely to blame… in my opinion https://t.co/wByGEo1PD8

Look, these are really important issues that keep getting pushed under the rug. Once again the Fed has revealed itself to be the biggest price driver of markets if only for a mistake in communication. Markets remain entirely dependent on a dovish Fed and hence Friday’s parade of 8 Fed speakers offered comfort.

The Fed of course is aware that things are not as rosy as they appear and their downside risk concerns are well founded and persistent low inflation readings giving the excuse to not raise rates while unemployment is at 50 year lows and the tech bubble and wealth inequality keep expanding.

..while market advances are very much dependent on 6 stocks:

The same 6 stocks that have helped drive tech valuations to a disconnect from the larger market at levels not seen since the dot.com bubble:

But earnings are so much better this time. True, but many of these companies are running into slowing growth issues of their own. $GOOGL was an example this week and got punished. Slowing growth has so far been ignored with $AAPL and $AMZN. $NFLX is a debt bomb ticking and $FB continues to face regulatory and political backlash. The market caps of these companies ($3.7 trillion) is so outsized any switch in sentiment as we saw in Q4 can produce sizable downside.

So sentiment must be maintained. With this backdrop of a never ending rally is the blast-off inevitable? Is the Fed, impotent to have a backbone, content to let the bubble lead to its inevitable conclusion?

And, speaking of sentiment, if only the Fed would gear its communication to not screw up then nothing bad would happen. This at least seems to have been the message implied by Mohamed A. El-Erian:

“The fact that it ended up moving markets suggests that the Fed needs to develop a better understanding of market technicals — or what some call a ‘feel’ for the markets. Without that, an important part of its policy arsenal — that is, policy guidance which ensures that markets do some, if not all of the heavy lifting — will become less effective,” he said.

Well, there you have it. So much for being data dependent or economy focused. But it is an important implicit admission: The Fed’s role is to guide markets. Higher. Communications that lead to downside are mistakes.

But Jay Powell’s communication error notwithstanding, by Friday ‘the program’ was back in full swing, magic risk free Friday for the win:

While the Fed may not be yet focusing on market technicals we are. Last week saw a break of some trends and the never ending rally produced an interesting candlestick on the $NDX:

That looks auspiciously like a bearish hanging man potentially signaling the end of a trend, an interesting spot to now see record short positioning on the $VIX: 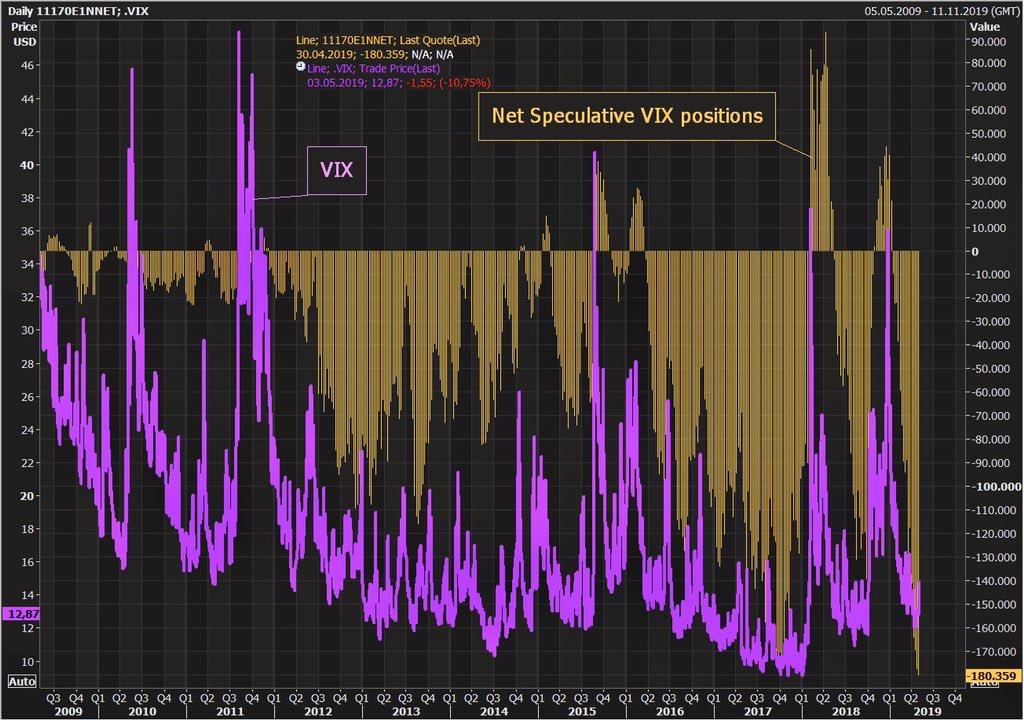 Which brings us back to the question from the outset: Is the never ending rally ready to blast off or is it running out steam setting up to finally correct?

Let’s run through the charts and technicals: