A Tale Of Two Americas… Going South Together

A 25 percent tariff on Chinese goods coming into the USA. That’ll git her done, all right – if you mean pulling the plug on America’s holographic economy. For about thirty years this is how it worked: China sent a massive volume of finished goods to us and we paid them with a massive volume of US Treasury bonds at ever-lower interest rates. A great deal for us while it lasted. Or so it seemed. Eventually, China caught onto the swindle and began liquidating its US bond holdings to buy gold and other real goods like African mining rights and farmland, Iranian oil, and port facilities in strategic corners of the world.

Now China has obviously designed a policy to dissociate itself as much as possible from the losing trade racket with us and replace the American market by increments with whatever customer base it can cobble together from the rest of the world. The Belt-and-Road initiative to physically link China with Central Asia (and beyond) with railroad lines and highways through some of the most forbidding terrain on earth was an out-front part of the plan, which we haplessly financed by buying all that stuff they sent over here for decades, and giving them the time to complete that colossal project.

Buying all those cheap toaster-ovens, patio loungers, sneakers, sheet-rock screws, alarm clocks, croquet mallets… well, you name it, naturally made it uneconomical for America to make the same stuff, with all our silly-ass sentimental attachment to union wages, eight-hour workdays, and pollution regs, so we just steadily let the lights go out and the roofs fall in, and ramped up the “financialized” economy, with Wall Street parlaying Federal Reserve largess into an alternative universe of Three-Card-Monte scams using multilayered derivatives of promises to repay loans (that have poor prospects of ever being paid back).

The outcome of that was two Americas: the hipsterocracy of the coastal elites and the suicidal deplorables of Flyoverland. 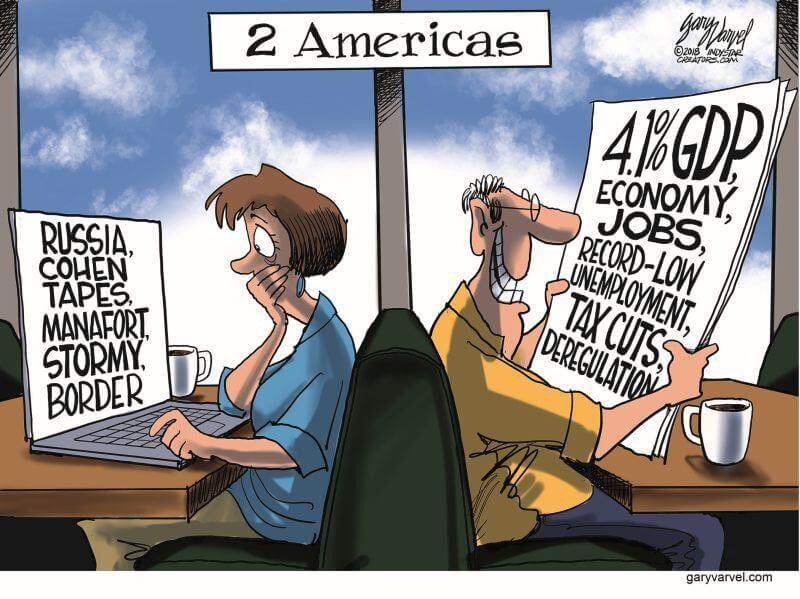 The hipsterocracy sustains itself on the manufactured hallucinations of the holographic economy — that is, on the production of images, TV psychodramas, news media narratives, status competitions, public relations campaigns, law firm machinations, awards ceremonies, and other signaling systems to maintain the illusion that the financialized economy has everything under control as we transform into a nirvana of ultra high tech pleasure-seeking and endless leisure.

Meanwhile, out in Flyoverland, the holograms aren’t selling so well anymore. Nobody has the scratch to pay for them, not even those indentured to the neo-feudal empires of WalMart and Amazon. The children keep coming, though it’s nearly impossible for a man to support them, and increasingly the fathers just take themselves out of the picture. The women ferment in single-parent hopelessness. The children turn more feral by each generation. All remaining economic opportunity is diverted back into the leveraged buy-out mills of the Coastal Elsewhere. Even growing food out of the land was long ago converted into an Agri-Biz hustle based on practices with no future. And now the spring weather is drowning out that hustle and driving the corporatized farms into bankruptcy.

The two Americas have turned a formerly workable political system into a divorce court and for the past three years nothing of value has come out of that negotiation except more mutual grievance and animus. The hipsterocracy, drunk on craft beer, has concentrated its hologram production on an operatic extravaganza of racial and sexual melodrama and the stupendously dishonest campaign to vilify the deplorables’ champion, Mr. Trump. If it was originally designed to just divert the deplorables from their economic injuries, it actually succeeded in focusing their dwindling energy into wrathful, righteous rage against those who foreclosed their future.

As I write, the stock markets have opened up in what looks like the beginning of a very bad week — apparently a reaction to Mr. Trump’s floundering trade deal talks. When these markets go emphatically south, both Wall Street and its hipsterdom subsidiary will find themselves reduced to their own special hell of deplorability. The realignment that emerges from that unholy mess will be the surprise of our lives.