There are currently 44 million student loan borrowers who owe approximately $1.6 trillion in student debt. Student loan borrowers are feeling the pressure of insurmountable debts as the economy slows, wages stagnate, and borrowing costs rise. As a result of taking out too much debt, new evidence shows an undeniable impact on borrowers’ mental health.

As debt loads increase, so does the borrower’s likelihood of suicidal thoughts, the study stated.

“The feeling of hopelessness gets you into a place where you feel like you can’t recover,” said Motlagh, a clinical psychologist with $300,000 in student loans.

The survey notes that borrowers with debt loads between $80k to $240k have the most suicidal thoughts. 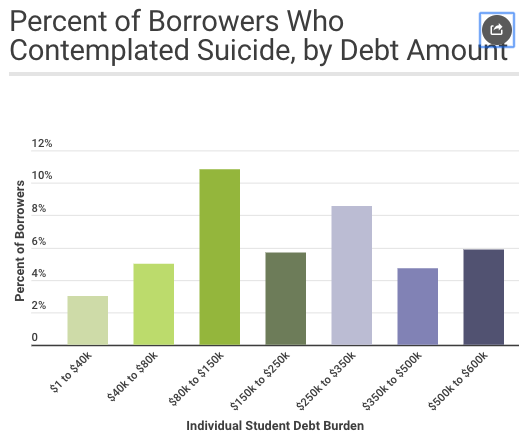 The borrower with debt loads between $80k to $240k has a high debt-to-income ratio, could be hard to refinance at a reasonable rate that will bring monthly payments to a manageable level. Borrowers above $240k tend to have higher incomes and can refinance their loans at a better price than $80k to $240k borrower.

In terms of profession, dentists were the most unstable people in the survey with at least 40 respondents. Veterinarians and lawyers also had regular suicidal thoughts.

One and 17 respondents knew someone who took their own life because of student loans.

The survey found that 53% of respondents had, at some point, experienced a severe case of depression due to their debts. A whopping 90% of the respondents had developed an anxiety disorder due to student debt.

“Most of my anxiety is over being in debt for a long time and from the uncertainty of whether the Public Service Loan Forgiveness (PSLF) program will stay intact long enough for me to utilize it, or if I will be able to get a job that qualifies for long enough,” said Rachelle, a California-based environmental scientist with an Ivy League degree. “I have had a very hard time getting proper employment.”

In Rachelle’s case, the uncertainty surrounding student loan forgiveness drove her into depression. She couldn’t find a suitable career that would enable her to pay off the debt. These factors have crippled her mental health, leading suicidal thoughts.

The survey said 43% of respondents were suffering from burnout. About 13% of borrowers said the interest was never-ending, is their highest concern.

Twelve percent of respondents said making the student loan payments contributed to anxiety and depression, while another 12% reported low wage jobs made them feel powerless. 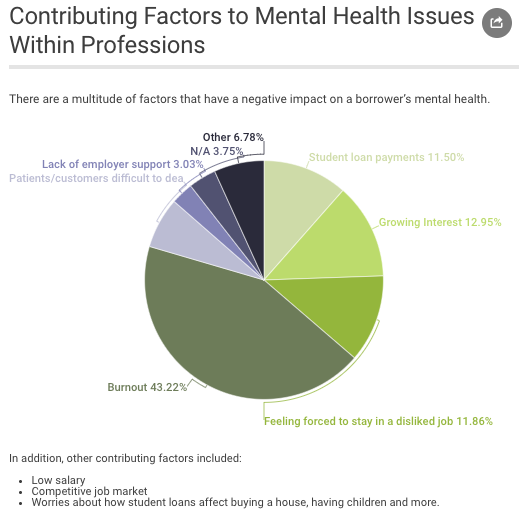 The government has encouraged more students over the last two decades to participate in the higher education scam. Young millennials were promised the world by government and educators to take out massive amounts of debt for a worthless fine arts degree. However, they failed to tell these youngsters that a great transformation is underway, one where a post-globalized society and automation have impacted the status quo that has been around for 70 years.

The total size of the labor force continues to stagnate, the momentum of economic growth is expected to slow into the early 2020s. The next phase of automation has begun, could eliminate as many as 20% to 25% of current jobs (or displace 40 million workers) and depress wage growth in the next decade.

So with that being said, millennials with insurmountable student debts better hope Elizabeth Warren’s student debt cancellation proposal goes through. Otherwise, the depression and suicidal crisis that is currently developing in student debt borrowers will accelerate.