After a barrage of big data releases and events last week, the calendar slows down this week… or at least was supposed to until Trump blew up the Chinese trade deal late on Sunday sending global markets reeling to start the week. That said, trade aside, we still have another round of trade meetings to look forward to between the US and China, as well as US CPI and PPI data which becomes a focal point in light of the recent Fed comments. We’ve also got a slew of data due out in China, the remaining PMIs in Europe and plenty of Fed speakers scheduled through the week.

Naturally, trade talks – or the lack thereof – will be the early focus next week as China’s top trade envoy Liu He returns (perhaps) to Washington on Wednesday. Until Trump’s forceful intervention on Sunday, when the president threatened to hike tariffs on Chinese imports on Friday as the trade talks drag on for too long, markets had already been left confused by the message following talks in Beijing this week. Initially the comments from the US side appeared mostly positive, however late last week, Chinese media reported that officials “may have hit an impasse” which caused markets to temporarily sell-off. In fairness, the details were less negative than the headline suggested, but the story could nevertheless be a signal from Chinese officials about their willingness to walk away from talks if a satisfactory deal isn’t soon completed. Of course, Trump’s tweet on Sunday blew up any tentative ceasefire that had been cobbled together over the past few months. So, as DB’s Craig Nicol writes, “it remains to be seen but with a tentative end-May deadline for an agreement to be reached, next week’s talks could go a long way to deciding the fate of those negotiations.“

Meanwhile, it’s a bit light on data in the US this week, however, we still have more important inflation data to digest starting with the April PPI report on Thursday and then the April CPI report on Friday. The latter is expected to rise +0.2% mom for the core, which would be enough to lift the annual rate by one-tenth to +2.1% yoy. Given Powell’s recent comments emphasizing that a good portion of the weakness in core inflation was due to “transient factors”, and that the trimmed mean rate is at the Fed’s target, inflation data will likely be garnering more attention again in the near term. Our US economists recently dug into the details of core inflation in a report this week which you can find here.

As for Europe, the main highlight will almost certainly be the remaining April PMIs on Monday when we get services and composite prints. All the focus will be on whether or not there is further divergence between the manufacturing and services sectors, or whether the gap is starting to close. The flash prints implied a decent decline for the non-core countries so that will be closely watched. Also worth flagging in Europe next week are March industrial production prints in Germany on Wednesday and France and the UK on Friday, along with the March and Q1 GDP reading for the latter.

In Asia, it’s a busy week for data in China with the Caixin PMIs due on Monday, April trade numbers due on Wednesday and April CPI and PPI on Thursday. In Japan we  get the Nikkei PMIs over Tuesday and Wednesday. 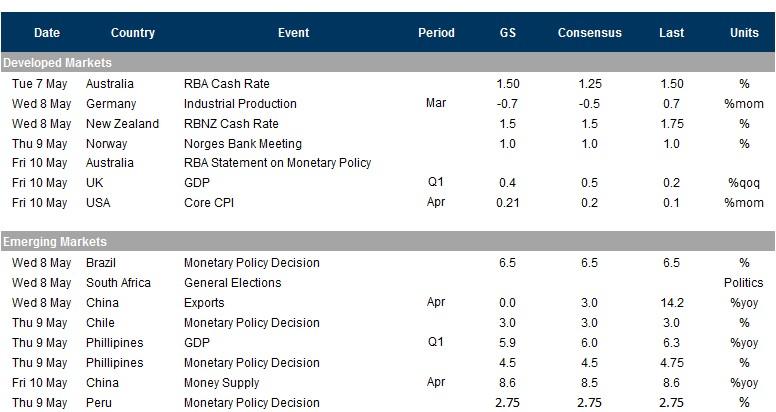 It’s also a reasonably busy week for Fedspeak which will likely be a focal point given the message particularly about inflation being transitory from the Fed on Wednesday. Bullard, Daly and Kaplan are all due to participate at the Hoover event early tomorrow morning before Harker speaks on Monday, Kaplan and Quarles on Tuesday, Brainard on Wednesday, Powell, Bostic and Evans on Thursday and Bostic, Brainard and Williams on Friday. It’s worth noting that Powell’s comments are due to come at a Fed community conference which isn’t typically seen as a venue for policy discussion. In Europe, the ECB’s Lautenschleager and Praet will speak on Monday, while Coeure, Villeroy and Lautenschlaeger also speak on Friday while over at the BoE we’re due to hear from Cunliffe, Haldane and Ramsden early in the week.

As for earnings, the run rate slows now with just 57 S&P 500 companies due to report. Through this weekend we’ve had earnings reports from 382 S&P 500 companies with 288 beating on earnings for an aggregate beat of +6.3%, but just 214 on sales. As DB notes, the breadth of beats in the US has rebounded from the seven-year low in Q4 and the size of beat is running well above average.  On top of that, guidance has seen the bottom-up consensus 2019 estimate rise for the first time since mid-2018. All-in-all a fairly positive earnings season so far then.

Finally, other things to watch next week include a meeting in Berlin between Merkel and US Secretary of State Pompeo, the European Commission’s latest economic forecasts also due on Tuesday, Pompeo meeting with UK PM May on Wednesday in London, South Africa national and legislative elections on Wednesday, Brazil’s rate decision on Wednesday and Norway’s rate decision on Thursday. It’s worth noting that markets in the UK are also closed on Monday.

Summary of key events by day, courtesy of Deutsche Bank:

And visually, courtesy of Amplify: 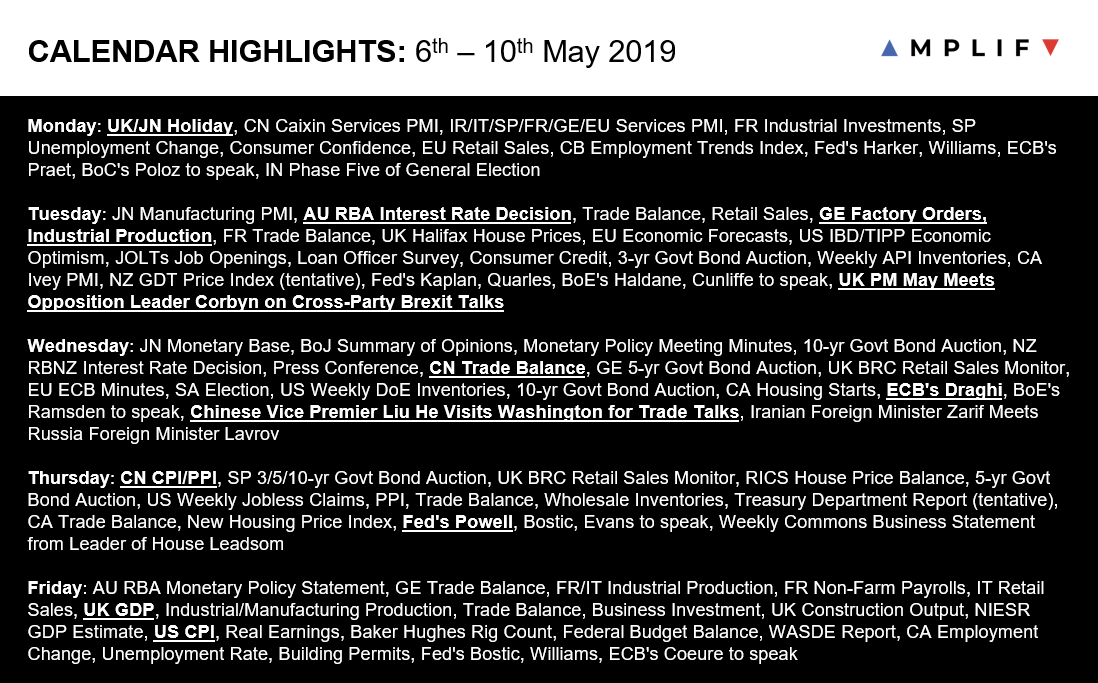 Finally, here is Goldman focusing on the US, and noting that the key economic data release this week is the CPI report on Friday, adding that there are several scheduled speaking engagements by Fed officials this week.