The latest alarm signal that the US economy remains on collision course with a recession, and that the US consumer remains especially burdened by debt and challenged by cash flows despite the record high in the stock market, came after today’s release of the latest Senior Loan Officer Opinion Survey (SLOOS) by the Federal Reserve, which was conducted for bank lending activity during the first quarter of 2019, and which reported that while lending standards and terms for commercial and industrial loans remained largely unchanged from already generously easy levels, demand for those loans tumbled to levels not seen since the financial crisis. Even more concerning is that banks also reported weaker demand for both commercial and residential real estate loans for the second quarter in a row, echoing the softer housing data in recent months.

First, the good news: three months after we reported that banks had continued to tighten lending standards in the last few months of 2018, potentially risking a feedback loop of tighter standard and declining demand, banks managed to break the first negative trend, and lending standards for commercial and industrial (C&I) loans remained essentially unchanged over the first quarter of 2019 for both large- and medium-sized firms as well as small firms, and on net terms for large and medium-sized firms eased slightly while terms were basically unchanged for small firms. 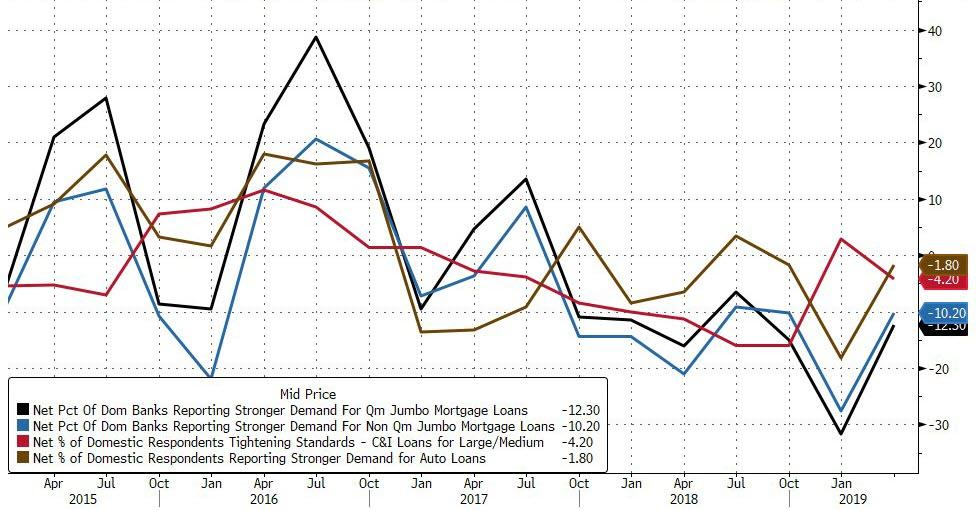 Some more details, via Goldman, which notes that relative to the last survey which we profiled here, standards on commercial real estate (CRE) loans tightened on net over the first quarter of the year, if more modestly than last quarter:

And while the lack of further tightening in lending standards was largely unchanged from the prior quarter, despite some instances of tightening, where there was s disturbing trend continuation was in what loan officers responded described as loan demand from large and medium corporations: here, as the chart below shows, the percentage of domestic respondents (i.e., banks) reporting stronger demand for C&I loans tumbled to the lowest level since the financial crisis, which suggests that either nobody needs debt to fund growth, expansion and new projects any more (unlikely), or potential US creditors are so worried about the future and their ability to repay, they refuse to take out any loans in the current business climate. 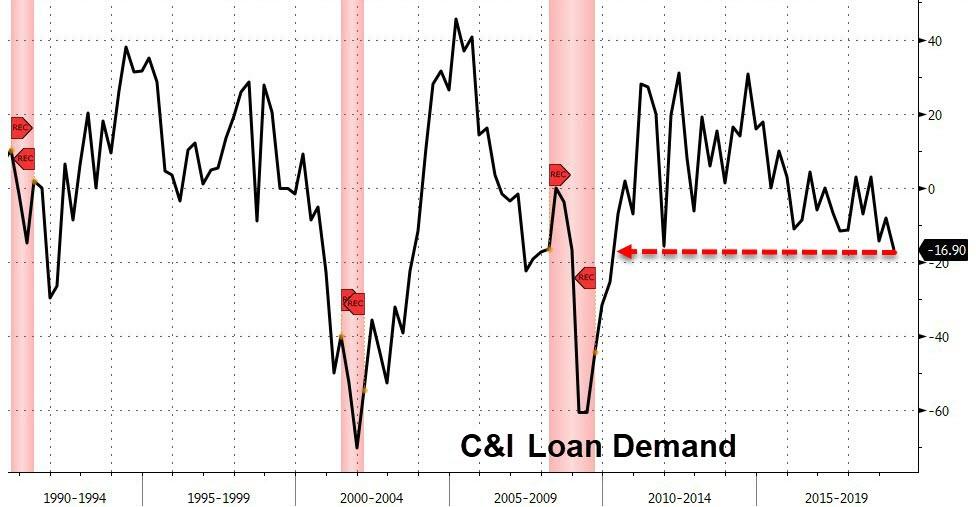 Digging into the data, banks reported that demand for CRE loans across all categories weakened on net, and demand for construction loans reportedly declined at 27% of banks on net. Similarly, demand for auto loans was basically unchanged, while demand for credit card loans and other consumer loans was moderately weaker. Banks also reported weaker demand across all surveyed residential loan categories, including home equity lines of credit.

It goes without saying, that such a sharp decline in loan demand is not what one would expect in what the BEA would represent is an economy that is growing at a 3%+ annualized rate.

Finally, responding to special questions on C&I lending to firms exposed to developments in Asia or Europe, a “moderate net fraction of banks reported they expect the quality of loans to exposed firms to deteriorate over the remainder of 2019. As a result, banks that have taken steps to mitigate risk of loan losses from such exposures reported the tightening of lending policies on new credit to exposed firms as the most frequently used action over the past year.

Here would be a good time to remind readers that according to a Reuters investigation conducted in mid-December, when looking behind headline numbers showing healthy loan books, “problems appear to be cropping up in areas such as home-equity lines of credit, commercial real estate and credit cards” according to federal data reviewed by the wire service and interviews with bank execs.

Worse, banks are also starting to aggressively cut relationships with customers who seem too risky, which is to be expected: after all financial conditions in the real economy, if not the markets which just enjoyed the best January since 1987, are getting ever tighter as short-term rates remain sticky high and the result will be a waterfall of defaults sooner or later. Here are the all too clear signs which Reuters found that banks are starting to prepare for the next recession by slashing and/or limiting risky loan exposure:

Then there are the bank-specific signs, starting with Capital One – one of the biggest U.S. card lenders – which is restricting how much it lends to each customer even as it aggressively recruits new ones, CEO Richard Fairbank said last December.

We have been more cautious in the extension of credit, initial credit lines, the broad-based credit line increase programs,” he said. “At this point in the cycle, we’re going to hold back on that option a bit.”

“In a downturn, industrial property is extremely illiquid,” he said. “If you don’t want it and it’s not needed it could be almost valueless.”

While a recession is looking increasingly likely, especially as it becomes a self-fulfilling prophecy with banks slashing loans resulting in even slower velocity of money, while demand for credit shrinks in response to tighter loan standards and hitting economic growth, the only question whether a recession is a 2019 or 2020 event, bankers and analysts remain optimistic that the next recession will look much more like the 2001 tech bubble bursting than the 2007-09 global financial crisis.

We wonder why they are so confident, and statements such as this one from Flagship Bank CFO Schornack will hardly instill confidence:

“I lived through the pain of the last recession. We are much more prudent today in how we underwrite deals.”

We disagree, and as evidence we present Exhibit A: the shock write down that Bank OZK took on its commercial real estate, which nobody in the market had expected. As for banks being more “solid”, let’s remove the $1.5 trillion buffer in excess reserves that provides an ocean of artificial liquidity, and see just how stable banks are then. After all, it is this $1.5 trillion in excess reserves that prompt Powell to capitulate and tell the markets he is willing to slowdown or even pause the Fed’s balance sheet shrinkage.