In what may be the most jawdropping case of marketwide BTFD observed in years, the S&P has successfully recouped almost all of its losses, and after sliding 2.4% overnight, it was down less than 0.4% just before 3pm, with the latest upside catalyst coming from CNBC which, citing sources familiar, reported that, as speculated overnight by the Chinese press, the Chinese delegation will travel to the U.S. this week for trade talks despite this weekend’s snub by President Trump which upended negotiations by threatening new tariffs on Sunday,

That said, there were some changes, and according to the report, China would send a smaller delegation than the 100-person group originally planned. More importantly, it remains unclear if Vice Premier Liu He would still helm this smaller group, because as we described this morning, his presence is the signal from China whether Trump managed to derail trade talks with his tweet, and if the team was traveling to Washington “with an eye toward sealing a deal” or merely to keep up appearances.

While the Beijing team was set to start talks with American negotiators on Wednesday, it remains unclear if the talks will still start Wednesday.

While the news clearly pushed risk to new session highs, the broader market was already ramping all day, and as we showed earlier, the Dow Jones was just 60 points lower after starting the session some 500 points in the red, while the Russell 2000 was on the verge of going green, where the Transports already were.

Behind the collapse was the plunge in the VIX, which tumbled from session highs near 19 all the way down to 15.50…

… as the most shorted stocked soared higher as usual. 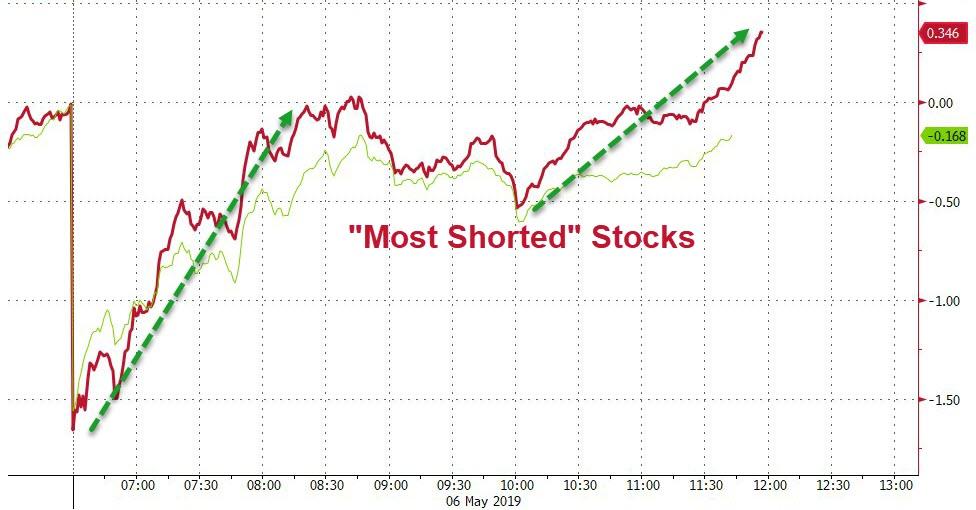 Blue Apron On The Brink? Seeks Funds Or A Sale As It Closes Facility