Behind The Recent Crypto Surge? Chinese Banks Are Quietly Running Out Of Dollars

Cryptocurrencies have had a good run in recent weeks, as a sudden renewed demand has lifted all boats and taken Bitcoin back near $6000 this morning…

The catalyst has remained unclear – anticipation of an ETF? Growing institutional interest? Short-squeeze? Manipulation? Or, just plain old safe-haven flows as various nations around the world collapse into totalitarianism?

We may have found one, rather large, answer – from China, where, as SCMP reports, authorities have quietly begun ‘soft’ capital controls on foreign currency withdrawals

Chinese banks have increased their scrutiny of foreign-currency withdrawals and quietly reduced the amount of US dollars people are allowed to withdraw, tightening the country’s capital controls as the nearly year-long US-China trade war bites.

The issue was thrust into the spotlight on Friday when a viral video clip showed a bank cashier unable to answer a furious customer demanding to know why she was not allowed to withdraw US$200 from her dollar-denominated account, even though she was within her quota.

The client was so incensed by the refusal that she filmed the incident on her phone at the unidentified branch of China Merchants Bank (CMB).

She also asked why the bank insisted she could only withdraw her US dollar savings by converting into yuan, the Chinese currency. The cashier seemed caught off guard, unable to address the woman’s questions.

It later emerged the woman had been placed on a “watch list” of customers making frequent withdrawals.

So, either Chinese banks are running out of dollars – scaring account holders into attempting to exit the country’s financial system before a liquidity crisis; or Chinese officials are actively tightening capital controls – scaring the wealthy into various capital flight techniques; as the trade war tensions escalate.

As we noted two weeks ago, following the biggest quarterly credit injection in Chinese history, it is safe to say that China’s banks are flush with yuan loans. However, when it comes to dollar-denominated assets, it’s a different story entirely. As the WSJ points out, in the past few years, a funding problem has emerged for China’s biggest commercial banks, one which is largely outside of Beijing’s control: they’re running low on US dollars so critical to fund operations both domestically and abroad.

As shown in the chart below, the combined dollar liabilities at China’s four biggest commercial banks exceeded their dollar assets at the end of 2018, a sharp reversal from just a few years ago. Back in 2013, the four together had around $125 billion more dollar assets than liabilities, but now they owe more dollars to creditors and customers than are owed to them. 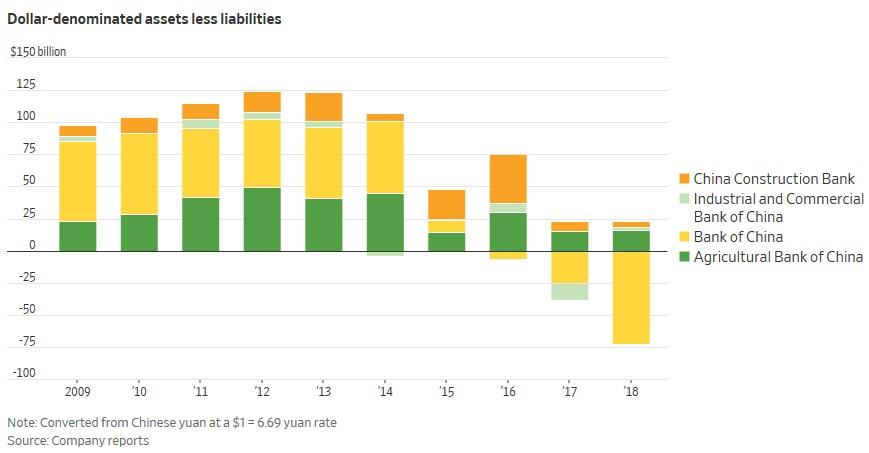 The reversal is the result of just one bank: Bank of China, which for many years held more net assets in dollars than any other Chinese lender, ended 2018 owing $72 billion more in dollar liabilities than it booked in dollar assets. The other “top 3” lenders finished the year with more dollar assets than liabilities, even though their net dollar surplus has shrunk substantially in the past five years.

And yet, as everything else with China, there is more than meets the eye: as the WSJ reports looking at Bank of China’s annual report, the bank’s asset-liability imbalance is more than addressed by dollar funding that doesn’t sit on its balance sheet. Instruments like currency swaps and forwards are accounted for elsewhere.

This is reminiscent of the shady operations discussed recently involving Turkey’s FX reserves, where the central bank has been borrowing dollar assets from local banks via off balance sheet swaps, which it then used to prop up and boost the lira at a time of aggressive selling of the local currency. It is safe to assume that the PBOC has been engaging in a similar operation.

Additionally, as the WSJ observes, such off-balance-sheet lending “can be flighty”, and citing a recent BIS study, the vast majority of currency derivatives mature in under one year, meaning they are up for constant renewal and could evaporate during times of pressure.

As SCMP further details, the capital controls appear to be tightening.

From late last year, the “scrutiny benchmark” for US dollar withdrawals was quietly cut to US$3,000 from US$5,000, according to an official at the Bank of Communications, who requested anonymity.

Meanwhile, banks were required to keep a “watch list” monitoring clients who made frequent foreign exchange withdrawals, said the official.

“The reason banks are so nervous is that China wants to closely monitor capital outflow against the backdrop of a prolonged trade war,” said Iris Pang, ING’s Greater China economist.

Restrictions on the movement of capital in and out of China have scuppered ambitions to become an international money market, with US bankers saying that it is still another five to 10 years from regaining its pre-Communist era status as the financial capital of the East.

China’s strict control of capital flows, heavy government intervention in financial markets, and the limited use of the yuan in international markets have restricted Shanghai’s role as a financial hub.

The presence of foreign money in China’s stock market in Shanghai is also tiny – less than 0.5 per cent of publicly traded stocks in Shanghai were owned by foreign investors as of the end of March, according to data from the Shanghai Stock Exchange.

The government’s intervention in the stock market is seen as a key barrier to reaching the 2020 goal.

As MishTalk’s Mike Shedlock concludes, the idea that the yuan will soon replace the dollar as the world’s reserve currency is absurd for currency reasons, political reasons, and economic reasons.

Anyone who suggests otherwise understands neither currencies nor global trade.

Finally, given the implications of the reserve currency curse, I highly doubt China even seeks what these petro-yuan analysts claim.

Everything from “Currency Requirements” through “Case Closed” I wrote in 2017.

I commented on most of those aspects long before that.

The gold and petro-yuan ideas were new, so I immediately debunked them.

Wake me up when those five things are fixed.

Meanwhile, if anyone tells you the yuan is about ready to replace the dollar as the world’s reserve currency, write them off as clueless.

We have been seeing such stories for a decade or longer, but China isn’t remotely close in at least five areas, and perhaps never will be.