Labour attempts to be all things on Brexit. It is for and against a referendum. 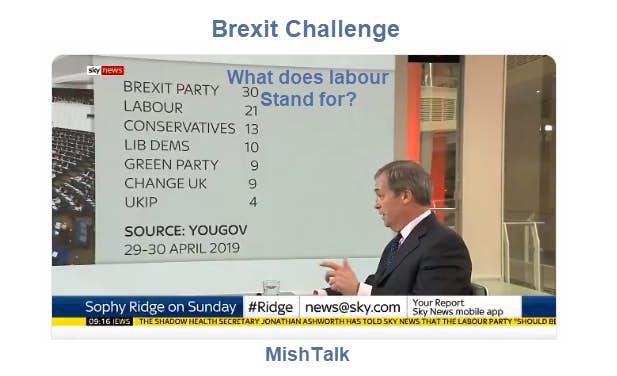 It is for and against Brexit.

I am challenging @JeremyCorbyn to a European election debate.

Labour voters are very confused about what his party stands for on Brexit.

Farage is spot on in asking “What Does Labour Stand For?”

Coalition of Parties Against the People

If @theresa_may and @jeremycorbyn do a deal on the customs union, it will be a coalition of the politicians against the people. pic.twitter.com/vb1YwnwA6I

Labour’s official position on Brexit is that it is in favor of honoring the vote.

But the Customs Union that Corbyn seeks is not honoring the vote, nor is it leaving the EU. It is the worst possible arrangement in having to abide by silly EU rules without having any say in their formation.

Corbyn’s position on a referendum is equally wishy washy. To appease Labour party members who want to remain, Corbyn is in favor of a referendum in certain cases.

One must recognize his true goal: His only concern is to become the next prime minister.

Labour has splintered over Brexit, just like the Tories. The split is not as noticeable, but it is there and significant.

The rise of Farage’s Brexit Party to first place in the polls is proof enough.