A Top West London art gallery covered up two paintings last week at the request of the artist after Muslim visitors complained they were “blasphemous,” according to The Times.

One of the paintings by pseudonymous artist SKU features Arabic script from the “shahada” one of the pillars of Islam contained in the Quran – overlaid on Ingress’s Grande Odalisque, with stars of David completing a mock American flag. It is meant to represent the conflict between Islamic extremists and America, according to the Times.

However, the inclusion of the Islamic declaration of faith, known as the shahada, in the painting prompted complaints from Muslim visitors, who asked for them to be removed from the west London gallery’s exhibition, Rainbow Scenes, which finished on Friday.

Usama Hasan, head of Islamic studies at the think tank Quilliam, said the paintings were not only offensive but blasphemous and sacrilegious. “They are really dangerous,” he said. “It’s The Satanic Verses all over again.” –The Times

SKU added that the works represented the expulsion of a “toxic spew” of media imagery – which include degrading images of women as well as propaganda meant to “illicit support for a cause and demonise others.”

While the gallery rejected calls to remove the paintings, SKU requested that they be covered. 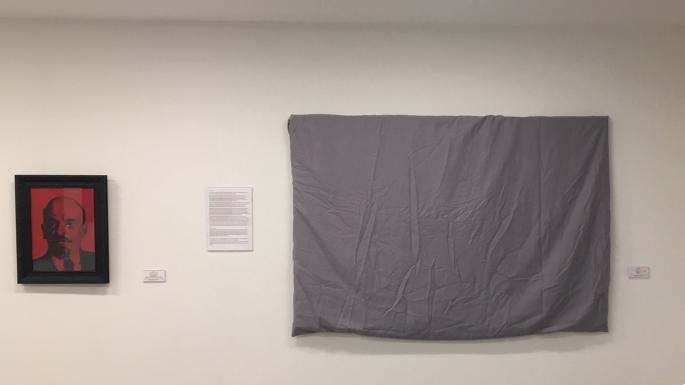 “It seemed a respectful solution that enables a debate about freedom of expression versus the perceived right not to be offended,” he said.

The gallery says that it “fully supported” freedom of expression as a fundamental right, according to the report. “The gallery also recognises the sincerity of the complaints made against these works and supported the artist’s decision to cover them until the end of the exhibition.”