As Credit-Card Defaults Climb, Banks Are Hoarding The Riskiest Accounts

As each of the seven largest credit-card issuers in the US reported a troubling jump in default rates to levels not seen in the better part of a decade, we noted last week that relaxed lending standards combined with ‘Non-GAAP’ FICO scores suggest that the American consumer is in far worse shape than many had realized – which could seriously threaten stability during the next recession (if the Fed ever allows one to happen). 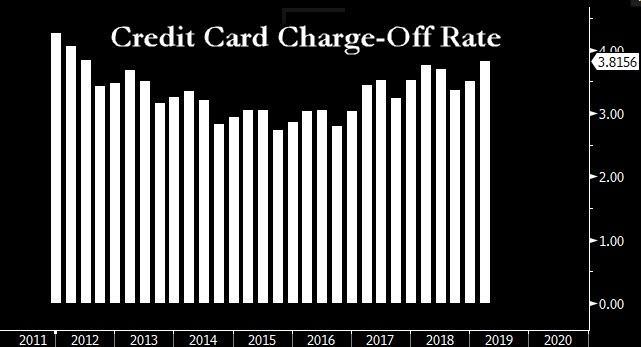 But as analysts dug into the implications of this trend for the ABS market, Barclays’ securitized credit strategist Alin Florea told the bank’s clients not to worry about the trend, because credit-card-backed ABS is protected by issuers stuffing these securities with only the highest quality borrowers.

But while Florea’s findings might reassure her clients, most of whom presumably own these consumer-credit-backed securities, those who own shares of US banks – for whom consumer banking has been a relatively consistent profit-center in the years since the financial crisis – might see things differently.

When they were bundling mislabeled subprime mortgages into ‘investment grade’ MBS during the run-up to the financial crisis, banks were all too happy to pass the shakiest loans off to their clients. But perhaps because they’re trying to lobby a now-divided Congress to roll back some of the more restrictive Dodd-Frank protections. Or perhaps because they feel the federal government will always backstop them should losses pile up to an untenable level, banks are opting to hold on to the accounts of some of the riskiest credit-card borrowers, As Florea explained.

Moving on from charge-off rates, which include borrowers who have effectively stopped paying their bills, sticking their lenders with the tab, Florea writes that a better indicator of near-term stress would be delinquency rates, which, though they have increased marginally since bottoming out in 2016, have still improved considerably since the years immediately after the crisis.

But by far the riskiest flavor of credit-card debt – that is, cards issued in partnership with retailers – has experienced a deterioration that is both more notable, and more sustained.

Still, Florea cautions that outstanding issues have amble credit enhancement to withstand delinquencies even if they continue to accelerate by a much larger margin. And even if things do go south, holders of these typically less-liquid securities can at least find some comfort in the fact that rising issuance and trading volumes have helped to improve liquidity – which means if they start to get cold feet later, they can at least bail on their positions without selling them at a discount.

In summary: While a blowup in credit card debt – which has eclipsed mortgage debt and auto-loan debt – isn’t an immediate danger, if signs of economic stress re-emerge, banks’ decision to relax their lending standards during one of the most robust economic recoveries on record could come back to bite them.