Goldman Capitulates, Now Sees Tariff Increase As The Base Case

The past 12 months have been a catastrophe for anyone who followed Goldman’s advice or trade recommendations. And for the bank which until last December predicted 4 rate hikes in 2019 (and now barely sees one more, some time in late 2020), and has been pitching a dollar short for as long as we can remember, resulting in substantial losses to anyone who listened as the greenback has continued to rise, it’s time to admit it has been wrong on arguably the most important issue facing the market.

As Goldman’s chief political economist, Alec Phillips writes, when President Trump “surprised” those gullible enough to believe a trade deal with China was imminent, and announced on Sunday (May 5) his intention to increase tariffs on $200bn of imports from China starting on Friday (May 10), Goldman “believed that there was a 40% probability that the increase would take place and that it was instead slightly more likely that the tariff increase would be narrowly avoided.“ 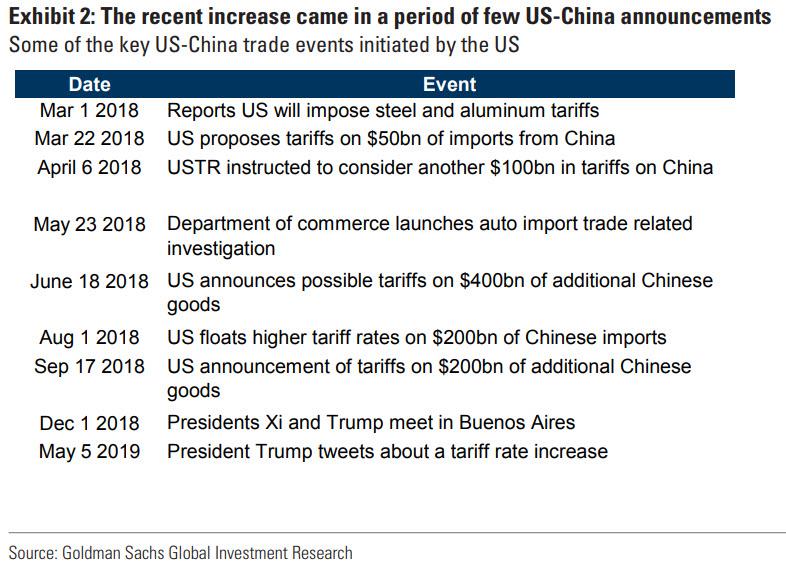 Since then however, Phillips writes that two key developments suggest the outlook has worsened incrementally.

As a result, Phillips has capitulated on his optimistic take, which until this morning had erroneously inspired Goldman clients with confidence that a deal is imminent – after all Goldman says it is – and notes that while he still views the outcome of this Friday’s new tariff deadline as a close call, “the odds are somewhat higher (60%) that the tariffs will take effect as President Trump and other US officials have indicated.” Ironically, reversing its base case to one of “no deal” is insufficient for Goldman, which still is eager to hedge its flip-flopping and notes that since Chinese Vice-Premier Liu He is still scheduled to meet with US officials on Thursday and Friday (May 9-10), “there is a fair chance (40%) that the tariff increase this week will be avoided.”

Of course, the very fact that Goldman now expects no deal, just hours before the fateful meeting, virtually assures that some agreement, however superficial,  will be ironed out.

With all that said, and echoing Steven Englander’s view of the possible outcomes from Friday’s meeting, here according to Goldman, are the three potential scenarios that could play out heading into the Friday tariff deadline:

So what happens if and when the higher tariffs do kick in, and how long could or would they last, especially since the reversal in the optimistic narrative means that the world’s best performing stock market in 2019, that of China’s, has been the worst this month? 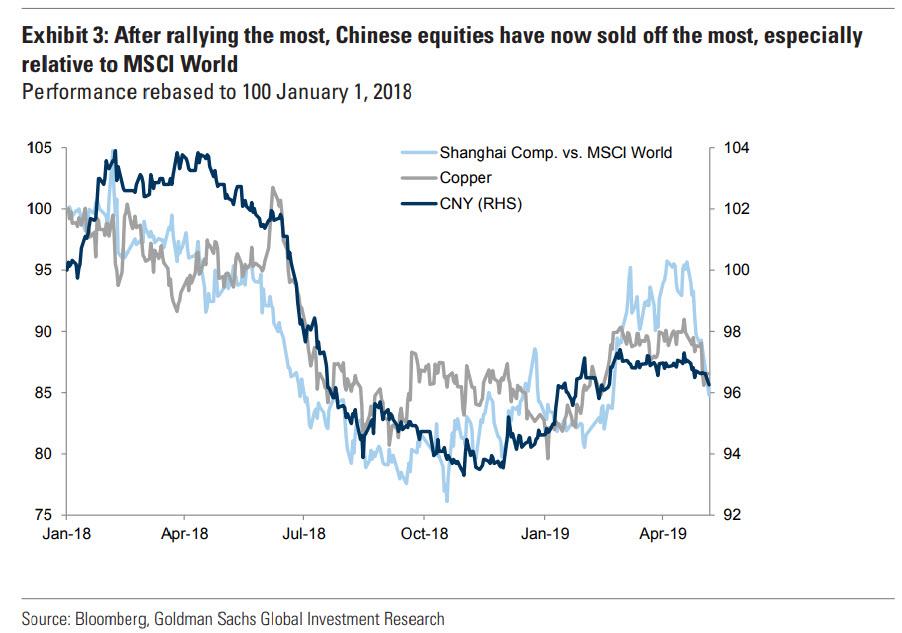 Here are some additional thoughts from Goldman:

Concerns about the economic outlook and a softening equity market might have been partly responsible for a more conciliatory stance with China in late 2018 and early 2019. With recent strength in economic data and US equity markets recently at new highs, the Administration might now feel more flexibility to impose tariffs even if they create temporary economic and market disruption. We also note that while the White House appeared to be pushing toward a near-term agreement with China, there is no particular deadline for a deal, so the Trump Administration might feel they have more time to strike an agreement.

That said, tariff escalation would not come without costs. Moving forward with the 25% tariff would likely set back the talks further and might threaten to reverse some of the progress that has already been made. US businesses who import affected products would face increased costs and US exporters would face disruptions from retaliatory tariffs. We note that Chinese retaliatory tariffs on soybeans and other US agricultural exports have negatively impacted the politically important farm sector, for example. While this might be a political price the Administration is willing to pay, it is likely something the White House would like to avoid, if possible.

While tariff escalation on Friday appears to have become more likely than not, we do not think there is a high probability that the US will impose the 25% tariff on the final tranche of $300bn or so of imports from China that President Trump suggested on Sunday (May 5), for two reasons. First, as shown below, the final round of tariffs would hit consumer products in particular, which would have even greater negative political implications than the earlier rounds of tariffs already implemented. Second, while we do expect that the US Trade Representative’s office will soon release a proposal to begin the process of implementing those tariffs, that process is likely to take at least a couple of months before implementation. Given that we still think an eventual agreement is likely, we believe the odds of the tariff increase on the remaining $300bn in imports from China are therefore fairly low (25%). 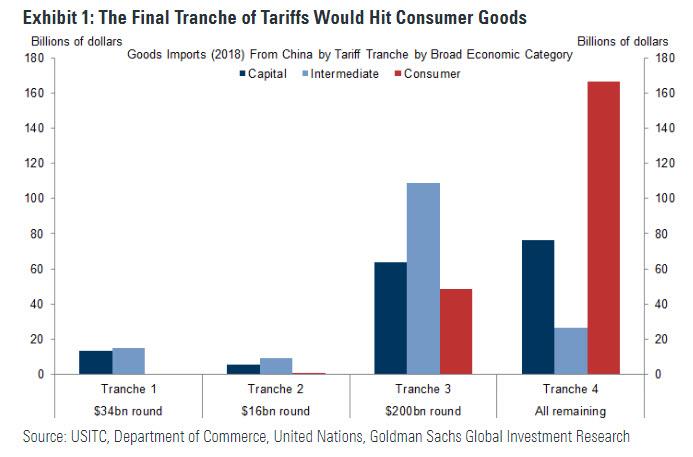 Finally, for what it’s worth (not much), Goldman does not believe that the latest developments change the outlook for auto tariffs very much (coming from Goldman, we would be very worried about auto tariffs). As a reminder, the White House faces a May 18 deadline to announce a decision on auto tariffs, but that decision may be postponed. This seems even more likely now that trade tensions between the US and China have escalated further. Regardless, Goldman views the probably of implementation of auto tariffs in the near term “to be quite low mainly because doing so would make it nearly impossible, in our view, to pass USMCA in Congress, as many Republicans whose support would be needed to pass USMCA strongly oppose the tariffs.” However, later this year, once USMCA has likely passed, the probability of auto tariffs rises somewhat even according to Goldman, “and the recent renewal of trade tensions suggests that the President is more willing than we had expected to disrupt markets and risk retaliation with trade actions.”