The main points of US President Donald Trump’s much-derided plan for the Middle East, the so-called “deal of the century,” were leaked by a Hebrew-language news outlet in Israel yesterday. Israel Hayom published the main points of the deal from a leaked document circulated by the Israeli Foreign Ministry.

The US has said it will reveal its deal after the Muslim month of fasting comes to an end in early June.

The main points of the agreement put together by Trump’s son-in-law, Jared Kushner – who has extensive interests in Israel and its settlements – and proposed by the US administration are as follows:

Partition of Jerusalem? Let my people in! – Cartoon [Sabaaneh/MiddleEastMonitor]

The US, EU and Gulf states would fund and sponsor the deal for five years to establish the state of “New Palestine”, the leak claims.

This would be at a cost of $6 billion a year; the majority of which -70 per cent – would be paid by Gulf states, with the US contributing 20 per cent and the EU ten per cent. 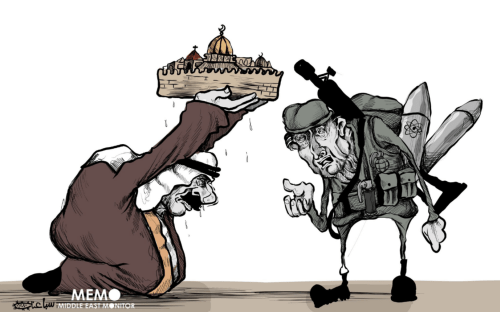 When the Arab World sells the Holy City – Cartoon [Sabaaneh/MiddleEastMonitor]

Would Thanos Have Had a Different Endgame if He Had an Economics Teacher?

Lacalle: A Day Of Reckoning Looms For The Global Economy