Theresa May Faces Tory Ultimatum: Pick Your Resignation Date Or We Will

The Tory leadership has finally had enough of Theresa May. She needs to pick a day to stand down, or Tories will. 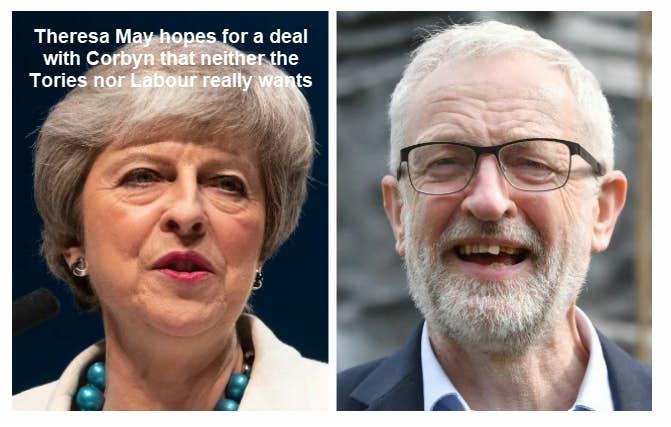 I was disappointed the 1922 Tory Leadership Committee refused to give May the boot last month.

Under party rules, a leadership challenge can only happen once in 365 days. May survived a challenge in December.

Months ago I proposed a rules change. The leadership committee met to discuss that action, but came to the wrong conclusion.

On April 22, I noted Tories Reject Rules Change But Ask May to Clarify When She Will Stand Down

The Independent reported 80% of Conservative supporters want Theresa May to stand down before next general election, survey finds.

Despite that unprecedented sentiment, May still hangs on. However, the 1922 committee is reconsidering after devastating local elections were Tories were clobbered. Even Labour lost seats, but only a handful.

The message is “deliver Brexit”.

Theresa May “deeply regrets” that Britain will have to take part in European elections on 23 May, and is pinning her hopes on completing the Brexit process in time to avoid MEPs having to take their seats.

Theresa May now targets July 1 as the New Brexit Date for Britain Leaving the EU.

May originally said Britain would leave on March 29, then April 12, and then May 22 – the eve of the European elections.

Although the elections will be held, May now hopes, as does the EU that the MPs will not take their seats when the new parliament meets in July.

A source would not comment on the meeting, though it was understood to have included discussions on setting a detailed timetable for when May would step down as Conservative leader.

Graham Brady’s big political moment has arrived as he has an unenviable and lonely, albeit necessary, task, over which he cannot procrastinate. He must force the Prime Minister’s hand and wrench the end date of Theresa May’s premiership from her; the alternative is the now substantial likelihood of losing not only his own seat but those of large swathes of his backbench colleagues. The Conservative Party will therefore be praying that the Chairman of the 1922 Committee is able to fulfil his historic duty.

I said that months ago, and even proposed the way, a rules change.

Finally, please consider Tory MPs ‘Will Move to Oust Theresa May this Week’ if She Agrees Brexit Deal with Labour.

Theresa May has been warned her MPs will begin moves to oust her as soon as this week if she agrees a Brexit deal with Labour.

Rivals in the race to succeed Mrs May are on a state of high alert in case a compromise deal with Labour becomes the trigger for a leadership election.

Senior sources within the Conservative Party said on Monday that Mrs May will be “gone very quickly” if she moves towards Labour’s demands for a post-Brexit customs union with the EU.

UK citizens are tired of this nonsense. The majority still wants Brexit, but they cannot agree on the form.

There was further talk today of another referendum if May cannot reach a deal with Corbyn. This is just what the remainers want.

The outcome would depend on the wording of the referendum. Suppose it was May’s deal, no deal, or remain. Those wanting to remain would vote in a block. The rest of the vote would be split.

However, it is highly likely that the EU, led by France would not be willing to wait long enough for such a referendum to take place.