“We Are Not Playing”: VW Introduces EV Hatchback In $34 Billion Plan To Take Down Tesla

With Tesla already facing stiff competition from high end retailers like Audi and Jaguar – both of whom have introduced luxury performance electric vehicles – Volkswagen is now posing an additional threat that could impact middle market buyers of Tesla’s Model 3.

In fact, Volkswagen has invested $34 billion in a strategy to try and take down Tesla as the leader in electric vehicles, according to Bloomberg. The company is now taking €1000 deposits for its new ID.3 hatchback, which Volkswagen is hoping will be the electric successor to its iconic Beetle. The vehicle will start at less than €30,000, which is about the same price as the diesel variant of its Golf hatchback.

“We are not playing. This is the car to beat for the future, for all our competitors.”

The ID.3 marks the beginning of a roll out of more than 20 battery powered models over the coming years for Volkswagen. Their target is to sell more than 1 million electric cars annually by 2025 and the company’s effort will undoubtedly continue to stoke the fire of competition in electric vehicles. Unlike Tesla, profitability remains paramount for VW. Stackmann continued, saying that VW’s EVs “must make money.”

The introduction of the ID.3 comes on the precipice of electric vehicles breaking through to the mass market, which still hasn’t happened in full yet.

VW is offering a special edition of the vehicle, limited to 30,000 vehicles and inclusive of a year of free charging at certain stations. Reservations have been opened for customers in 29 countries across Europe, including Germany, Norway and the Netherlands. The car will be officially unveiled in September, and Stackmann expects the company reservation book to be full ahead of the event. 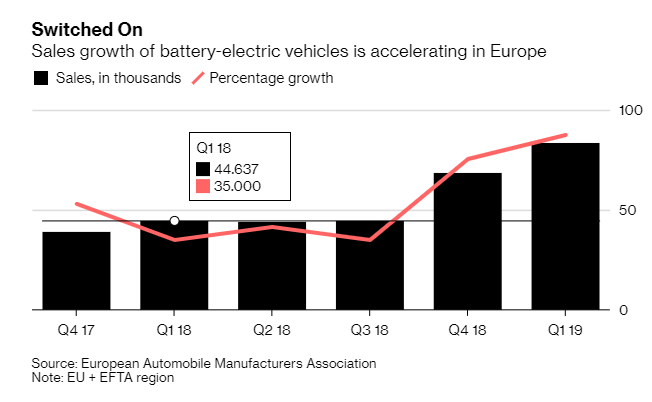 Tesla has tacitly acknowledged the rivalry, sending an email to prospective German customers on Wednesday reminding them that its Model S and Model X both have the best range of electric cars in production. The assembly of the ID.3 will start later this year and first deliveries are planned for mid 2020. The company is targeting 100,000 sales per year of the new model.

“Volkswagen is a big player, and when we go, a lot of people follow,” Stackmann concluded.