Update (2030ET): Minutes after the meeting tweet was greeted optimistically by the machines, Reuters reports that US-China talks are over for the night, and Trump’s tariff hikes are set to take effect.

Chinese Vice Premier Liu He, U.S. Trade Representative Robert Lighthizer and U.S. Treasury Secretary Steven Mnuchin talked for 90 minutes on Thursday and were expected to resume talks on Friday. Officials did not speak to reporters as they left the talks.

Before they get back around the table on Friday, the United States will have increased duties on $200 billion of Chinese goods, to 25 percent from 10 percent. The duties apply to cargoes leaving China after 12:01 a.m. EDT Friday.

The result was very quick removal of the overnight gains…

So what happens next?

As we noted earlier (via Goldman):

1. We continue to believe the tariff rate on the $200bn tranche of tariffs is likely to officially increase to 25% at 12:01 a.m. ET Friday (in about 11 hours). However, we note that this is a slightly softer deadline than previously expected. According to the formal notice increasing the tariff rate to 25%, the increase will apply to goods that both 1) enter the US for consumption on or after 12:01 a.m. ET Friday, and 2) were exported to the US after May 10. In other words, at 12:01 a.m. Friday the tariff rate will technically be 25% but only for goods that leave China after that point. By contrast, in the formal notice implementing the 10% tariff rate last September, the tariff applied to goods that entered the US for consumption after the deadline and there was no similar “in-transit” exclusion (see Exhibit 1). 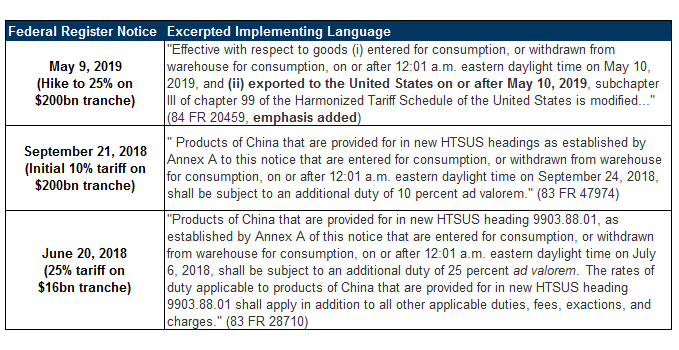 2. This technical detail might create a limited window for negotiations to continue before the US places Customs duties on imports from China. If the tariff increase technically goes into effect at midnight tonight, the duty collections might not rise for about two weeks, or whenever shipments leaving China on May 10 arrive at US ports. In our view, this means that trade negotiations are more likely to continue over the next couple of weeks than if the potential tariff increase in May was a “hard” deadline.

3. This nuance might also result in slightly less downside to sentiment regarding the US-China trade outlook than if 12:01 a.m. Friday was a “hard” deadline. That said, events over the next week could pose risks in both directions if the tariff increase takes effect on May 10. Even though we expect that talks might continue, the US Trade Representative’s office also looks likely to release a proposal to apply 25% tariffs on the remaining roughly $300bn of imports from China not yet subject to tariff if the May 10 tariff hike takes effect.

That’s the good news. There is some potentially worse news as Phillips explains below, and it involves an escalating tit-for-tat retaliation:

4. China would also likely move forward with retaliatory tariffs. China has already announced it will retaliate if the US follows through with its tariff rate hike to 25%. In September, China had announced tariffs on about $60bn of imports from the US at rates of 5%, 10%, 20% and 25%. However, China ultimately imposed the tariffs at a rate of 5-10%. In our view, Chinese retaliation could take the form of increasing these tariff rates (such as to 25%). In addition, China may reimpose additional tariffs on US autos and auto parts, which it has suspended since December 14.

Needless to say, should China pursue a retaliatory route, Trump’s willingness and ability to compromise would be severely curtailed and the outcome would be the worst possible from a game theory perspective.  At least that’s the theory, for what happens in practice, tune in one minute after midnight for the official announcement.

With just a few short hours until Washington unleashes the next round of tariffs, all it took was a tweet from Fox Business to spike futures…

Edward Lawrence tweeted that: “Exclusive: President Trump meeting with Treasury Secretary Steven Mnuchin & US Trade Representative Robert Lighthizer right now. They are talking about the trade talk progress ahead of tariffs being upped on the Chinese.“

Exclusive: President Trump meeting with Treasury Secretary Steven Mnuchin & US Trade Representative Robert Lighthizer right now. They are talking about the trade talk progress ahead of tariffs being upped on the Chinese. #china #trade

Not exactly earth-shattering, but enough for Johnny-5 and his algo friends to lift Dow futures 200 poinst…

Additionally, Vice President Mike Pence said Thursday the Trump administration is working “literally hour by hour” to reach a trade agreement with China, as the deadline loomed on a U.S. threat to raise tariffs on Chinese imports.

Larry Kudlow has been oddly quiet – perhaps they are resting him just in case of a bloodbath tomorrow?