The nausea-inducing yoyo that is China’s monthly credit creation continued its wild swings in April, and after a record January, a disastrous February, a sharp resurgence in March, the April numbers released overnight showed that credit once again tumbled after the Chinese new year in the latest disappointment out of Beijing.

As we noted last month, one month after Beijing in February shocked China-watchers with one of the lowest total credit injections in recent history, which in turn followed a record, blow-out January, the PBOC responded with a monster flood of new credit when the PBOC reported that in March new yuan loans jumped by 1.69 trillion, far above 1.25 trillion estimate, while total social financing in March soared higher 2.86t yuan, the highest March increase on record; smashing the 1.85 trillion yuan estimate, and more than four times the February 703BN yuan increase.

The surge prompted many to ask if Beijing is now willing to reflate the economy at all costs, even if means trampling its previous vow to engage in – at least symbolic – deleveraging.

Unfortunately, with the release of the latest – April – numbers we still don’t have the answer, because in the latest disappointment, one coming at a very sensitive time for the global economy which has become almost exclusive reliant on China’s credit creation engine, the PBOC reported that in April money and credit growth decelerated sharply from the rebound in March, with new CNY loans and total social financing below expectations, just in time for Deputy Premier Liu He to arrive in Washington today to finalize trade negotiations.

Here are the key numbers:

New CNY loans dropped to 1,020BN yuan in April, down sharply from 1.69 trillion in March, and below consensus expectations of 1,200BN. Outstanding CNY loan growth also dropped to 13.5% yoy in April from March 13.7% yoy. 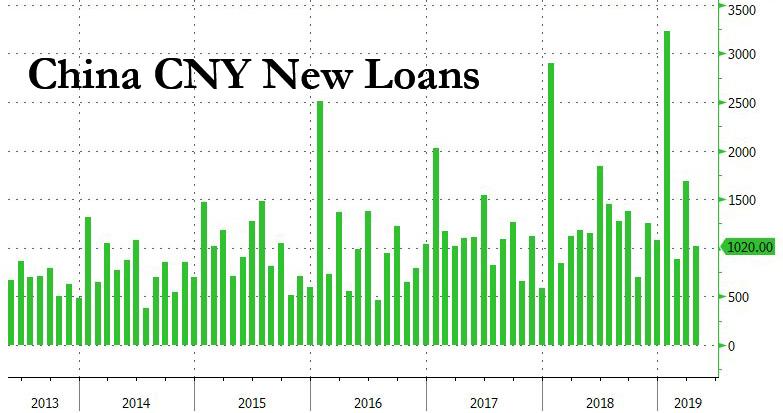 The broadest, Total Social Financing aggregate, which also includes shadow banking components, also tumbled to 1,360BN yuan, sliding below the consensus estimate of 1,650BN and tumbling over 50% from 2,860BN in March.

According to the PBOC, TSF stock growth slowed again, and was 10.4% yoy in April, vs. 10.7% yoy in March. According to Goldman, if one adds all local government bond net issuance to TSF flow data, adjusted TSF stock growth at 11.1% yoy in April, lower than 11.6% in March. The implied month-on-month growth of adjusted TSF was 9.2% SA ann, lower than 11.5% in March.

In short, with the Lunar new year holidays in the rear view mirror, and no longer distorting the data, there was another sharp slowdown, just as the trade war between the US and China appears to be restarting.  This is rather ominous for both China, and the rest of the world, both of which are especially reliant on China’s massive credit injection machinery to keep growth humming.

Looking at some other monetary aggregates, in March M2 rose 8.5% yoy in April, in line with the consensus estimate of 8.5% yoy, and slightly lower than March’s 8.6% yoy. 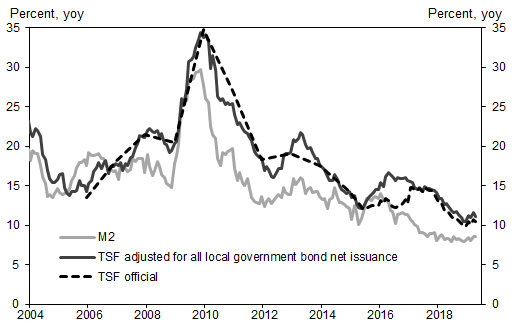 In other words, if indeed China is once doing everything in its power to flood the economy with new credit, as it represented in the first three months of the year, then it is failing, and will have to try much harder in the future. It also explains why futures surged above 2,900 once the number hit.

So what to make of this data, which keeps conflicting month to month? According to Goldman, the weakness in April money and credit data is likely the result of an intentional change in policy stance toward a less supportive one, as reflected in the less dovish monetary policy, after activity growth, as well as an inflation and equity market performance rebound in 1Q. The 7-day repo went above 3% for several days in late April, for the first time in 2019. The drop in local government bond issuance was notable and occurred because issuance was heavily front-loaded this year.

Of course, the situation has changed dramatically in recent days as trade tensions have escalated again and April export growth data missed the consensus forecast significantly. In fact, according to Goldman’s Yu Song, there is a growing risk for potential downside surprises when other activity data is released on the 15th, especially the relatively more important and reliable IP data.

Meanwhile, since the weekend’s trade tweets from President Trump, we have seen a targeted RRR cut – which was announced first thing on a Monday morning, probably for the first time ever – and the overnight repo rate is approaching an all-time low to well below 2%. While the direct size of the impact of the targeted RRR cut was relatively small and the effectiveness of a lower interbank rate on size of lending is uncertain, it is typically the case that when the government intends to loosen policy it takes other less visible, often more administrative, and often more effective measures, though these are not necessarily as efficient (in terms of resource allocation).

The bottom line is these should facilitate more money/credit creation, at least on the margin, in May.

Finally, with respect to the heightened uncertainty around trade, the visit by Deputy PM Liu He is an indication of the Chinese leadership’s desire to resolve the issue, even if it was reportedly China that scuttled negotiations last week with a list of demand that reneged on what had previously been agreed upon. The tone of the comments from official sources such as the Foreign and Commerce Ministries has been conciliatory, unlike this time last year. The more hawkish comments have been mostly made by less official commentators. Still, as Goldman noted earlier, the outcome of the trade negotiation remains highly uncertain as it is not clear if what will be offered to the US will be taken as good enough.

As a result, according to Goldman it is likely that the loosening policy bias is here to stay in the near future. And since it is almost a certainty that tariffs will be raised this Friday, if only for the time being, Goldman still believes that a deal will likely ultimately be reached (even if not all tariffs go away), but until then policy will still tend to be more dovish than in April because of the heightened concern that there could be further surprises. The tolerance level for uncertainty appears to be falling as the anniversary of the founding of the PRC approaches (October), leaving less room for maneuver if things were to go wrong.

The bottom line for policymakers is still “do whatever it takes” to maintain stability but no more than that.