In rare moments markets face major event risk, in even rarer moments the event risk is well advertised in advance and the risk implies massive potential moves in either direction.

Markets are faced with such a moment right now: The outcome of the China negotiations.

Ever since Donald Trump tweeted out new tariff threats last Sunday markets have experienced their most serious rout in 2019 with $VIX exploding higher right in front of the advertised decision day tomorrow.

In process markets have broken their 2019 up trends (see also Shattered) and indices such as $SPX have rejected new all time highs. The decision outcome tomorrow is likely binary, Trump either follows through on the threat or he won’t. If he follows through China may retaliate and the trade talks long serving as a rallying cry for markets under the banner of “trade optimism” may very well escalate into serious tensions that could either delay any trade resolution for months or even cause them to fall apart with potential very significant consequences.

Of course the tariff threat may just be bluster and/or effective depending on your point of view, in which case we may see a massive rally, even to new highs. Even today we see a quick lift in markets off of Trump’s most recent comments that a trade deal is still possible and he has thought of an alternative and has received a “beautiful letter”. It’s literally a ping pong game, but it’s also a technical one.

Without going into the political or strategic or the myriad of possibilities (including a kick the can scenario) but let’s just look at the potential sizes of the bullish and bearish outcomes.

The bullish: Tensions get reduced and/or a trade deal actually comes to fruition or an “alternative” kick the can scenario brings hope again. 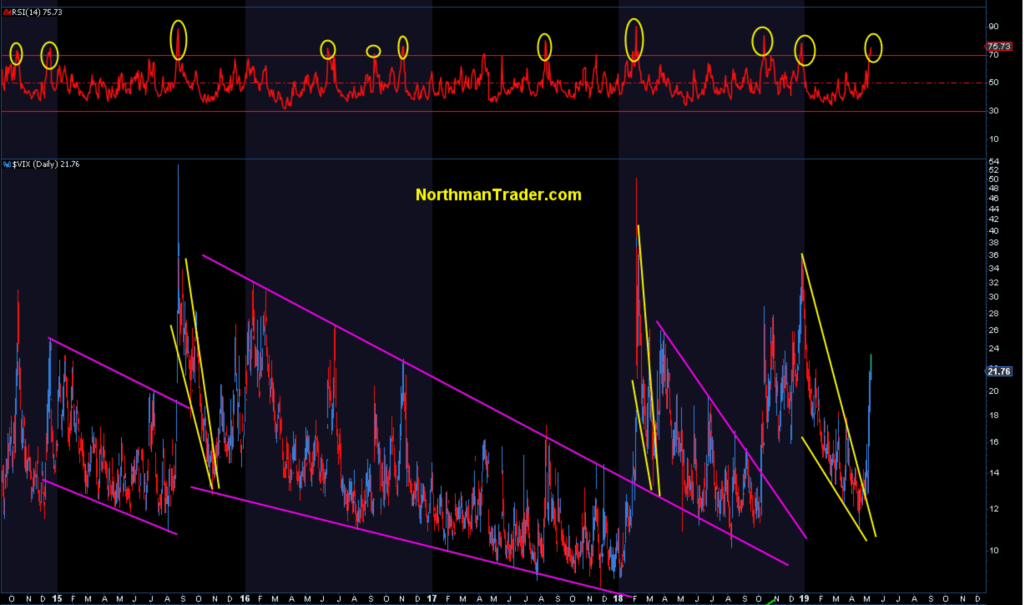 Indices such as the $DJIA are showing the largest oversold readings in 2019:

And of course it’s the week before OPEX (often a bullish pivot) and put/call ratios have reached levels often commensurate with fear and market bottoms (chart showing yesterday’s close):

These are mere examples, but they highlight the potential firepower of a rally on trade relief.

The bearish: The flip side of course would be an insistence on the side of the administration to implement tariffs and the trade war escalates or even falls apart.

In this case much further downside risk exists for a rally that has still only seen a minor correction so far:

A complete breakdown in trade talks of course would bring perhaps much larger implications, a breakdown in global confidence, a risk of a global recession unfolding and larger technical patterns being triggered to come to fruition.

Take $DJIA as an example, currently engaged in a potential massive topping pattern having recently failed to reach new highs, its technical target on a major reversal, the .382 fib or the 19,100 area:

In a similar vein the $SPX, without renewed highs could be confronted with a major top on a pronounced negative divergence, a rejection of the 2009 trend line and a failed MACD cross on the monthly chart, its .382 fib sitting at 2080:

Think that’s absurd? Not according to this pattern:

The 2018 Q4 correction was seen as unthinkable in September of 2018 by many participants as well, but then it happened nevertheless. Hence, from my perch anyways, one has to keep an open mind about the outcomes and the technicals.

5% upside risk above the current 2019 highs. 30% downside risk below the 2019 highs on a global recession with lots of trading opportunities in between. We’ll know more into tomorrow and Monday, then the world can re-assess.

US To Lead Biggest Military Drill In Europe Since Cold War, Showing NATO How It’s Done

Border Crisis: Most Arrests In 12 Years; Over 168,000 Released Into US; Measles, Chickenpox Found

Opposing Lockdown Is Not “Profits Before People”