Across the world, warning signs are flashing about the state of the economy.

Three-fourths of the global economy (per GDP) will experience a slowdown this year. The pause in growth has unquestionably transmitted through the global smartphone industry, sending shipment volumes down 6.6% YoY in 1Q19, according to new data from the International Data Corporation (IDC) Worldwide Quarterly Mobile Phone Tracker.

Smartphone vendors (Samsung, Huawei, Apple, Xiaomi, Vivo, Oppo, and others) shipped 310.8 million units in 1Q19, recorded the sixth consecutive quarter of decline. Last year, smartphone shipments fell 4.1% over 2017, as 1Q19 was down 3.5% — about half of what the market experienced in 1Q19, indicating the slowdown has only accelerated.

The plunge in demand is more proof that 2019 will be another huge down year for worldwide smartphone shipments.

At the heart of these high-tech handheld gadgets, are microprocessor chips that serve as the central processing unit. Earlier this week, we highlighted a report from the Semiconductor Industry Association (SIA) that warned of a 13% drop YoY in 1Q19 in chips, a direct correlation to waning demand from smartphones.

However, there was one green shoot, Huawei become number two smartphone manufacturer in the world, with smartphone shipments increasing 50% YoY in 1Q19.

“It is becoming increasingly clear that Huawei is laser focused on growing its stature in the world of mobile devices, with smartphones being its lead horse,” said Ryan Reith, program vice president with IDC’s Worldwide Mobile Device Trackers. “The overall smartphone market continues to be challenged in almost all areas, yet Huawei was able to grow shipments by 50%, not only signifying a clear number two in terms of market share but also closing the gap on the market leader Samsung. This new ranking of Samsung, Huawei, and Apple is very likely what we’ll see when 2019 is all said and done.” 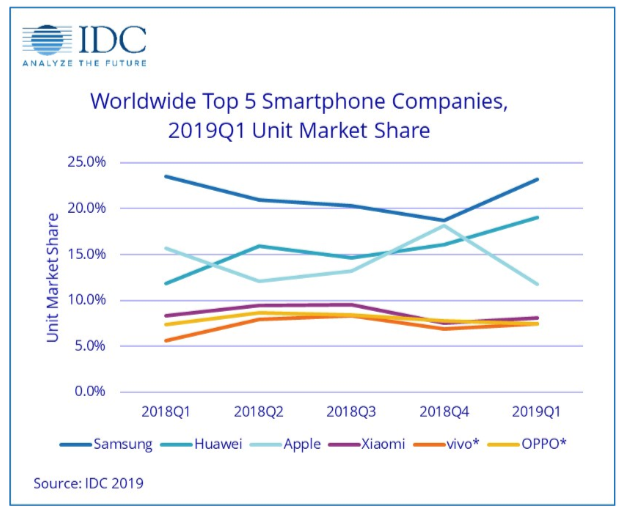 IDC poured cold water on a 2H19 rebound in China, indicating the smartphone industry in the country will likely be “challenged” for the remainder of 2019, and noted that the epicenter of the downturn was in North America.

“The less than stellar first quarter in the United States can be attributed to the continued slowdown we are witnessing at the high end of the market,” said Anthony Scarsella, research manager with IDC’s Worldwide Quarterly Mobile Phone Tracker. “Consumers continue to hold on to their phones longer than before as newer higher priced models offer little incentive to shell out top dollar to upgrade. Moreover, the pending arrival of 5G handsets could have consumers waiting until both the networks and devices are ready for prime time in 2020.”

The deterioration in smartphone sales forced LG Electronics in South Korea last month to suspend all smartphone production in the country. The South Korean based electronics company is expected to transfer resources to Vietnam, which follows a list of multinationals reorganizing their complex supply chains as a global synchronized slowdown gains momentum in 2Q.

Samsung controls 23.1% of the global market share, the largest out of any company, but it’s down 8.1% from 78.2 million shipments in 1Q18. Huawei logged a 50.3% increase in shipments, shifting the Shenzhen based company to the second largest smartphone manufacturer in the world with 59.1 million shipments, while Apple was demoted to the third spot since its orders crashed 30.2% YoY to 36.4 million shipments.

Both reports from IDC and SIA suggest the second half rebound that has already been priced into global stock markets through multiple expansion is merely a fantasy. Perhaps, the plunge in smartphone and semiconductor chip demand is a sign the global economy is still crumbling.

We’ll leave readers with a chart of where the global economy in terms of trade volume is headed. As shown below, the move is down and it’s likely to be met with new rounds of global central bank easing.