Following last month’s disastrous starts and permits data, Tuesday’s release of the S&P/Case–Shiller US National Home Price Index hinted at a nasty slowdown in all 20 metropolitan regions the index tracks, indicating that the era of double-digit growth is coming to an end.

Case-Shiller’s 20-City Composite expanded at just 3.00% YoY in January (just above the 2.95% YoY expectation but sharply below March’s 3.51% YoY print), we reported Tuesday. This is the weakest annual growth since September 2012, decelerating for an 11th month in January as buyers held out for more affordable properties. At the national level, home prices increased at just a 4% rate, the smallest gain since 2012.

With a housing slowdown observed across the country, it certainly seems like the housing market has reached a significant turning point.

The runaway price gains of the past five years are coming to an end for San Francisco, Seattle, Portland, Denver, and Las Vegas. West Coast housing has started to deflate in the last several quarters.  This was a similar call at Bank of Amerca last September, as we reported, the bank said: existing home sales have peaked, reflecting declining affordability, greater price reductions, and deteriorating housing sentiment. 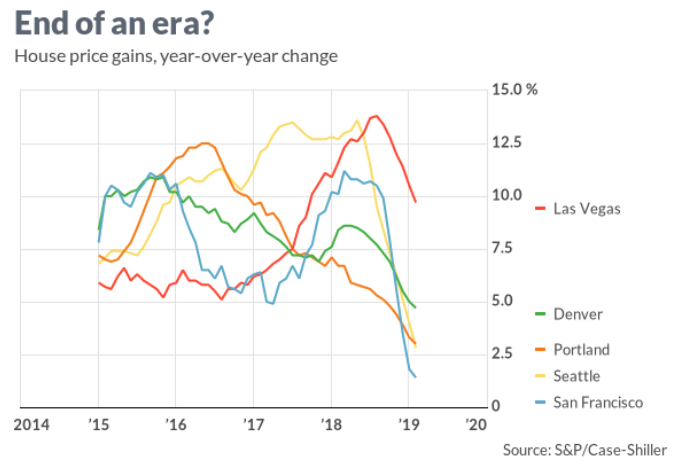 “The pace of increases for home prices continues to slow,” said David Blitzer, chairman of the S&P index committee. “Prices generally rose faster in inland cities than on either the coasts or the Great Lakes,” indicating the housing bubbles on both coasts are now deflating as residents rush to sell and move to more affordable regions in the heartland.

Is the housing market really this sensitive to mortgage rates? Well, the S&P/Case–Shiller hitting its weakest annual growth rate since 2012 in a period of quantitative tightening and multiple rate hikes over the last several years certainly seems to answer that question. With rate traders pricing in 30bps of rate-cuts in 2019, will the Fed cut before or after home prices across the country plunge?

Is The Global Dollar In Jeopardy?

How China Is Building and Bugging Government Offices In African Nations