No country has better exemplified the global automobile recession than China. Sales for the world’s largest auto market continue to deteriorate, with the latest report confirming that passenger vehicle sales in China tanked yet again – this time dropping 16.6% year-over-year to 1.54 million units, following a 12% decline in March and an 18.5% slide in February. In addition, April SUV sales fell 14.7% to 642,220 units. 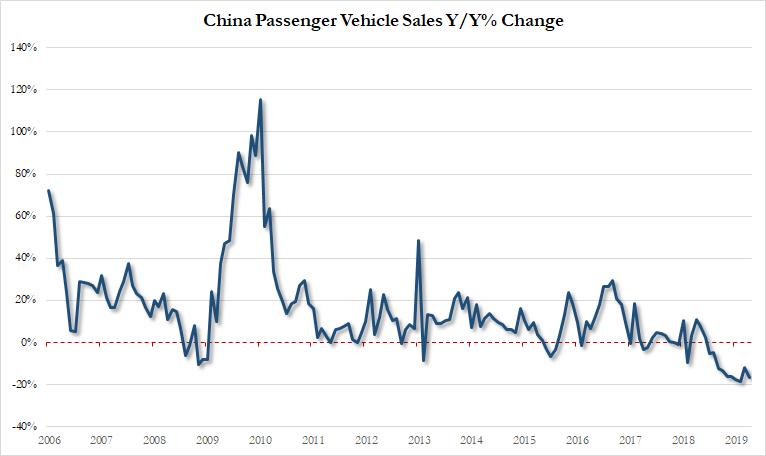 The last time retail auto sales were up in China was all the way back in May 2018, meaning sales have declined for a record 11 months in a row.

The country’s slowing economy and continued trade tensions with the United States are weighing on consumer sentiment among its 1.4 billion people. Additionally, changes in tax policies and import tariffs have also acted as a headwind for car demand. Cars were the only consumer product category in China that shrank the first two months of 2019.

“There’s little hope for us to see positive signs for the auto market in the first half,” Cui Dongshu, secretary general of the industry group, said. As regular readers may recall, this is the same, once optimistic Cui who suggested in March that car sales “may recover in April”. He predicted poorly.

Despite the market contracting, names like Volkswagen, Honda and Toyota all gained ground. Ford Motor Co. and General Motors Co.’s Wuling and Baojun brands both fell in April, according to LMC Automotive. Ford reported a 54% sales plunge in China last year and said last week that it’s introducing more than 30 vehicles targeted specifically for Chinese consumers over the next three years to help it hone its focus on the market.

Some additional data, according to Bloomberg: 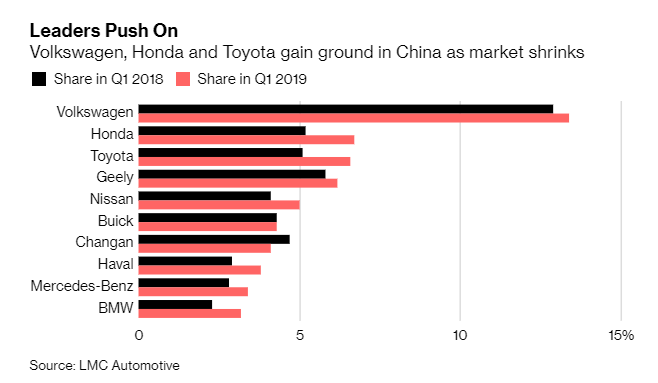 The industry continues to hope for catalysts from the Chinese government, betting on consumer incentives like tax cuts. Last month, we noted that retail sales of sedans, SUVs, minivans and multipurpose vehicles dropped 12% to 1.78 million units, according to the China Passenger Car Association. This was after an 18.5% drop in February and a 4% drop in January. 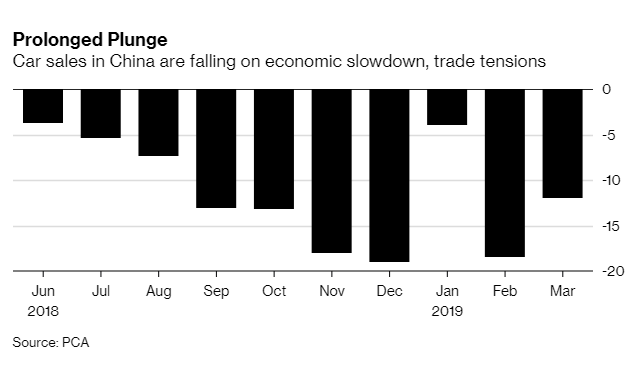 Chen Hong, chairman of SAIC Motor, China’s biggest automaker, had said last month: “2019 will bring severe challenges.” Trying to rally his employees in an internal worker memo, he called for his company to “accelerate innovation and strive toward higher quality”. SAIC’s sales fell 17% in the first two months of 2019.

Not only have we recently commented about collapses in other countries, noting auto registrations in Germany falling 1.1% in April, but we have also written about how the slowdown in the world of auto manufacturing is taking its toll on other industries, like the steel industry.

Days ago, we wrote about European steelmakers offering lower profit guidance on the back of softness in the automobile industry. ArcelorMittal, for instance, expects demand in Europe to contract by 1% this year, compared to their earlier forecast of 1% growth. Regional lobby group Eurofer predicted earlier this year that demand would fall by 0.4%.

The company said Thursday: “Market conditions in the first quarter of 2019 have been challenging. Demand has generally been lackluster, reflecting softness in manufacturing activity and continued weakness in automotive.” 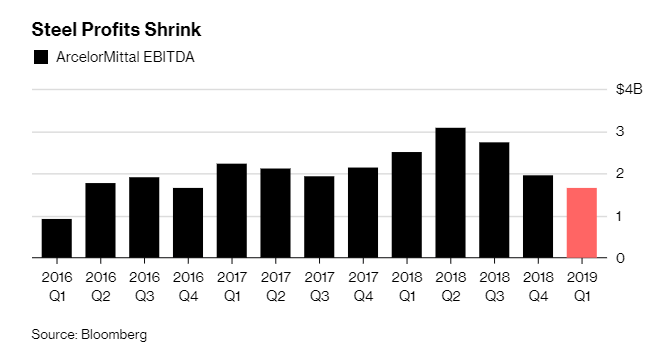 The global auto recession has wreaked havoc, especially because products for cars are usually the most profitable for steelmakers. This is especially true for Germany’s premium brands that demand high-quality metal. The auto industry accounts for about 20% of total steel demand. Car sales in Europe have declined for seven straight months through March.

There was one small sliver of good news, as ArcelorMittal has projected demand will rise in China this year… but if April sales numbers are any indication, expect an adjusted downward revision in the coming days.

The Declining Empire Of Chaos Is Going Nuts Over Iran