The first time the global economy was all set to boom, officials were at least more cautious. Chastened by years of setbacks and false dawns, in early 2014 they were encouraged nonetheless. The US was on the precipice of a boom (the first time), it was said, and though Europe was struggling it was positive with a more aggressive ECB emerging. Even Japan was looking forward to a substantial QQE-based pickup – after the VAT tax hike.

For much of the rest of Asia, things were looking up. Global growth wasn’t that time synchronized, but it was just enough. In April 2014, in its Regional Economic Outlook, the IMF wrote:

Asia is well positioned to meet the challenges ahead provided it stays the course on reforms. The region has strengthened its resilience to global risks and will continue as a source of global economic dynamism. Recent actions taken to address vulnerabilities are starting to bear fruit.

The organization’s Economists also warned there were still vulnerabilities, though they never did figure out why.

Growing regional integration is propelling Asia’s growth but could also amplify the impact of global and regional shocks. Events over the past year have been a reminder of Asia’s exposure to policy decisions in advanced economies.

The dollar had already turned against the world when these words were published, not that it made any difference to the IMF. It had nothing to do with “policy decisions in advanced economies.

CNY was moving downward, unexpectedly, which in the mainstream was welcomed as surely the work of the PBOC punishing speculators.

It would be consumed by the darkness of the shadows. Euro$ #3 is not just academic history, though. It was easy in 2017 to set all that aside and believe these were “transitory” if unspecified factors which interrupted the boom setup. That’s what everyone thought because authorities said so: 2014’s boom didn’t disappear, it was merely delayed until 2017.

For April 2014, Chinese authorities had suggested exports to the rest of the world added up to around $188 billion. In the latest figures released today, total exports in the month of April 2019 were around $195 billion. In five years, exports have grown by a little more than 3%. Not per year, total.

The IMF was right about one thing. You can guess how the rest of the Asian and EM economies have performed with that much of an external drag on China. Again, not recovery.

Chinese exports last month were down 2.7% from April 2018. For all of 2019 so far, export totals are almost identical to those in the same months of 2018. These are, for China, Asia, and the rest of the world, very bad numbers. 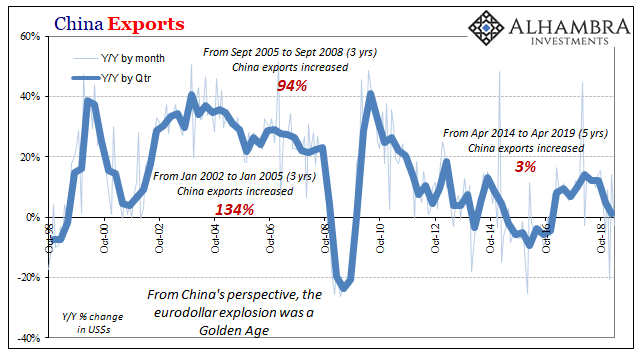 To put them in context, from September 2005 to September 2008, a period of only three years, Chinese exports just about doubled. In the three-year period before that one, they did better than double. Despite twice calling for global booms over the last five years, China’s export sector manages just 3%? Something is, and remains, very wrong. Big picture wrong.

For one thing, there was a whole lot of debt written up and issued especially 2009 to 2014 expecting what the IMF did: a full and complete worldwide recovery. That’s huge risk which only amplifies each time the “boom” fails. You might think about sticking around and holding fast if one boom fizzles, but to see it repeat in the same fashion a second time?

Everything changes when you begin to contemplate time. In 2014 and again in 2017, it was how there’s been enough time passed since the Great “Recession” such that recovery has to be imminent. The world economy only grows, we’ve been taught, therefore simple reversion to the mean. Asia, the “source of global economic dynamism”, front and center.

To fail twice with Asian economies leading both declines it will start to redraw expectations. Longer-term expectations and present value calculations. Even the most optimistic of optimists, if they are honest will sense the increasingly strong possibility for the opposite time case: it is now 2019 and confronting another downturn, this is more than enough time. The former premise is flipped upside down; if a recovery was coming it would have shown up by now.

The impossible is now the most likely.

There’s your markets October to December, an OH SH%& moment with various global curves and bond/funding markets taking it a step further in the last few months. The economic data keeps confirming the downturn scenario, which, in the wider context of false booms means more than just immediate concerns. 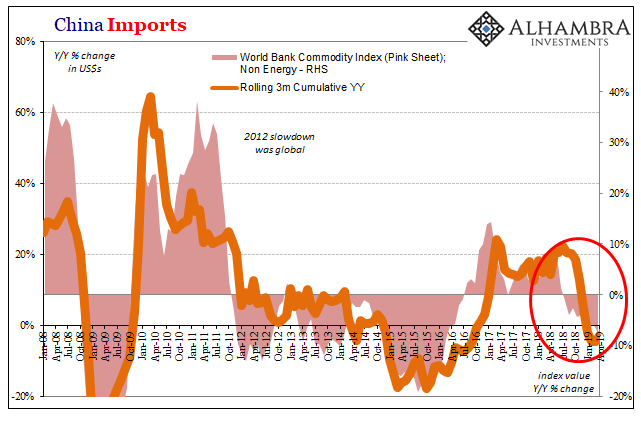 Chinese imports were up 4% year-over-year in April 2019, after falling 7% in March. There’s really no difference for China nor the rest of Asia in those two rates. If it’s not 30-50%% growth, it is the same moribund global economy as since 2008, prone to these “unexpected” downturns which interrupt every (small) chance for escape.

With non-energy commodity prices still falling, we know which way Chinese imports are likely to go in the months ahead. In other words, having already confirmed a global downturn underway, there is still more downside risk to come. Not only did 2017’s boom fizzle, so, too, it appears did 2019’s “dovish” global response to the fizzle.

That’s especially true of and in China itself. The PBOC far from being omniscient and near omnipotent, RRR cuts are not stimulus. They are the desperate recognition of a problem way, way beyond the central bank’s ability to manage. 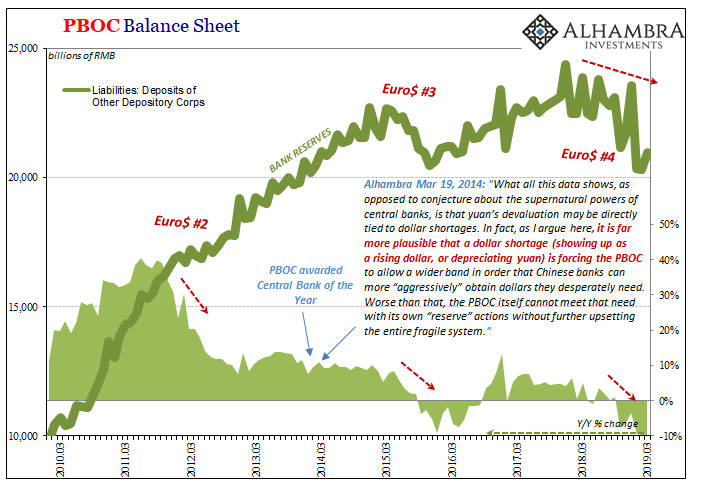 The very same type as had erupted early on in 2014. The first one you could think was a subprime shock recession, the second an anomaly, the third a harder one to figure, but now a fourth? Not coincidence. The global economy cannot, will not escape the eurodollar’s squeeze.