The US may have imposed a fresh 25% tariffs on $200BN in Chinese imports at midnight, but that doesn’t mean that “optimism” that a deal will eventually be done is being discarded. Quite the contrary, and one only has to read the top Bloomberg article today… 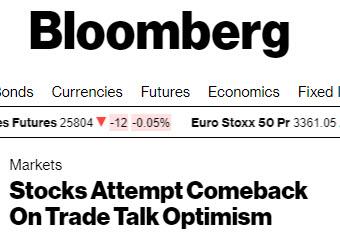 … to get a verbatim flashback to what was reported back in July 2018… and every other month in the past two years.

And so, with stocks already roaring back from intraday lows which dragged the S&P as far down as 2,826, president Trump decided to not take any chances, and just after 3PM EDT sent out two tweets that echoed what Mnuchin and Liu He had said earlier, namely that the talks, which ended abruptly and only after 2 hours earlier today, were “constructive” and would continue, even though the default state is now one of higher tariffs as “the United States has imposed Tariffs on China, which may or may not be removed depending on what happens with respect to future negotiations!”

Over the course of the past two days, the United States and China have held candid and constructive conversations on the status of the trade relationship between both countries. The relationship between President Xi and myself remains a very strong one, and conversations into the future will continue. In the meantime, the United States has imposed Tariffs on China, which may or may not be removed depending on what happens with respect to future negotiations!

….into the future will continue. In the meantime, the United States has imposed Tariffs on China, which may or may not be removed depending on what happens with respect to future negotiations!

Also of note, Trump did not tweet anything about imposing tariffs on the balance of Chinese goods currently not subject to tariffs.

That was enough to send stocks soaring, and the Emini is now blasting above overnight highs even though for all the optimism, China’s main trade negotiator, Vice Premier Liu He, just left his DC hotel on the way to the airport, and no talks are scheduled from here; in fact the best that the Vice Premier could say is that “talks will continue at some point.”

Vice Premier Liu He left his DC hotel on the way to the airport. #China #Trade no talks are scheduled from here, but the Vice Premier told us the talks will continue at some point. pic.twitter.com/XCvjai24xR

According to Edwards Lawrence, Mnuchin also told Vice Premier Liu He “they have about four weeks until just about everything else China imports into the US gets a 25% tariff. The President says that is $325Billion worth of items.” In other words, the US is ever so gently reminding China it has a gun to its head and the clock is ticking.

Meanwhile, Mnuchin confirmed what the Chinese Vice Premier said, namely that no future talks are planned as of this moment:

I just saw Treasury Secretary Mnuchin in the West Wing and I asked him what’s next on the schedule for trade talks with the Chinese. He said: “Nothing planned as of now.” He also told me he thought the conversations today were “constructive.”

None of that matters to stocks which were infatuated with the renewed “optimism”, and the S&P was back to the critical level of 2,890, up 60 points from session lows, and a confirmation to Trump that escalating a trade war with China was precisely the right thing to do from a market standpoint. 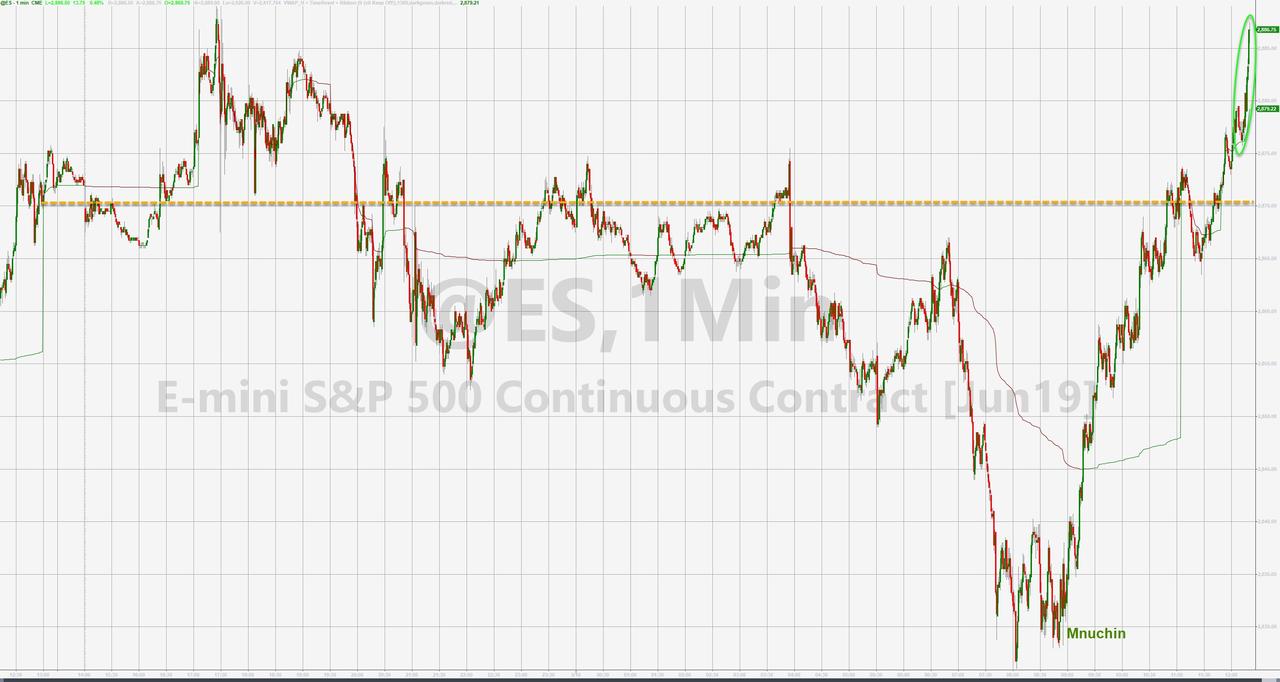 China’s Exploiting The COVID-19 Pandemic To Expand In Asia