After producer prices rebounded in April, US consumer prices were expected to follow suit but while they did rise 2.0% YoY (slightly hotter than the 1.9% YoY gain in March), CPI was below expectations of a 2.1% rise.

This left both CPI and PPI annual gains at 2.0%… 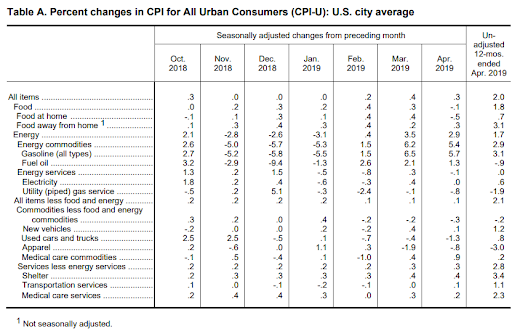 The report showed used-car prices slumped for a third month, dropping 1.3%, the most since September, while new vehicle prices rose 0.1%, less than the prior month.

Shelter costs, which make up about a third of total CPI, continued to underpin inflation. The index climbed 0.4% for a second-straight month, with owner’s-equivalent rent rising 0.3%. On a year over year basis, shelter costs rose 3.8%, the highest since Sept 2017.

Fed Chair Powell has suggested the too-low inflation will prove temporary as it is driven by “transitory” factors, and today’s pick up in Core CPI (which rose a hotter than expected 2.1% YoY) may remove some of The Fed’s patience.