US Hikes China Tariffs After Talks Result In No Progress; China Vows To Retaliate

After much theatrics and 11th hour negotiations, the US more than doubled tariffs to 25% on more than $200 billion in good imports from China just after midnight on Friday in what has been dubbed the “most dramatic step yet” in Donald Trump’s crusade to extract trade concessions from Beijing, deepening a nearly two-year old conflict that has roiled global markets and impacted the world economy.

While the White House said in a statement that talks are set to resume Friday, setting the stage for a tense final day of negotiations between Liu He, China’s vice premier and Robert Lighthizer, the US trade rep, Bloomberg reports that according to “close observers” there is little hope for any meaningful breakthroughs, especially since Liu does not have the authority to make any meaningful commitments, while an alleged phone call between Trump and president Xi yielded no positive results. It was also unclear, Bloomberg adds, whether China had resolved the internal debates that had led to last week’s rescinding of prior commitments to enshrine reforms agreed in Chinese law.

News that the US would hike tariffs, and set off a sequence of events that would most likely result in further escalation pushed US equity futures, treasury yields and the USDJPY lower around midnight. 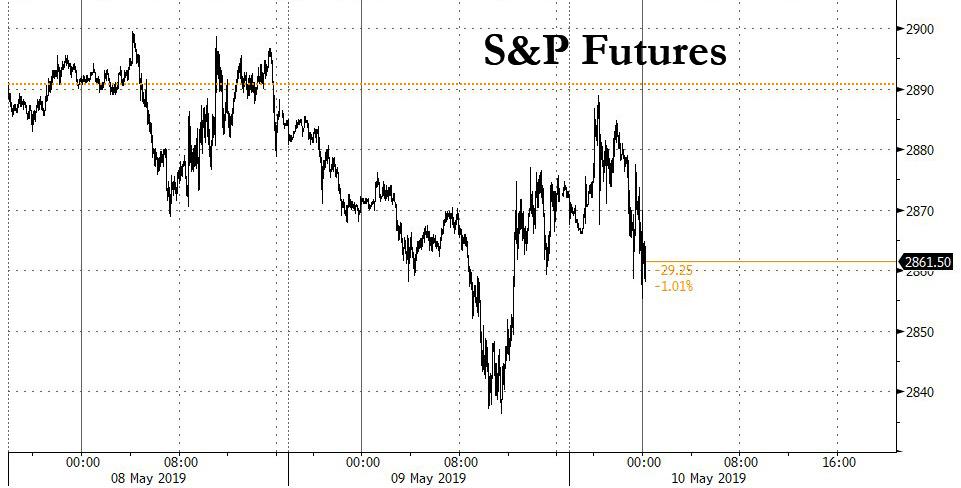 In response to the tariff hike, China immediately said in a statement it “deeply regrets the latest tariff hike” and that it will be forced to take countermeasures against the US actions, but didn’t specify how, even as it said that it sill hopes the two sides can resolve issues via ongoing consultations.

#China’s full statement on U.S. tariff hikes. Note: no word on what the countermeasures will be. pic.twitter.com/R3oauTVx8T

The tariff hike came after brief discussions between Liu He and his U.S. counterparts in Washington made little progress on Thursday, with the mood around them downbeat, according to people familiar with the talks. The negotiations were due to resume on Friday morning Washington time.

Before the late Thursday talks, Liu told Chinese state media he was coming to Washington “under pressure but with sincerity” and warned that a move to raise tariffs by the U.S. starting Friday was not a solution and would be painful for both China and the U.S.

It was also not exactly clear how China could retaliate, as Beijing can no longer match the U.S. tariffs dollar-for-dollar because they simply don’t buy enough American goods. According to analysts, among Beijing options include:

Making matters worse, ahead of Thursday’s talks, Trump said the U.S. would go ahead with preparations to impose 25% tariffs on a further $325 billion in goods from China, raising the prospect that all of China’s goods exports to the U.S. – roughly $540 billion last year – would be subject to new import duties.

Curiously, at roughly the same time, Trump sought to clam financial markets after he said it was still possible to reach a deal this week, and noted that he may hold a phone call with his Chinese counterpart, Xi. However, by late Thursday, no call between the two leaders had taken place nor had one been scheduled, according to a senior Trump administration official quoted by Bloomberg.

The market reaction to the new tariffs has been modest because, as previewed earlier by Goldman, there is still a grace period before the sanctions truly impact Chinese goods – they will only affect goods that are shipped after the midnight deadline, and any other goods already in transit will be exempt. This, as Goldman’s Alec Phillips explained, gives the two sides a few more weeks of back and forth discussion to reach some compromise.

The problem, of course, is that it is now that much more difficult for either side to backtrack without losing face, making an amicable resolution over the next fortnight virtually impossible.

Meanwhile, the latest escalation in trade tensions between the U.S. and China, which emerged out of the blue this past Sunday in two Trump tweets, roiled financial markets around the world with investors who had been expecting a deal as recently as a week ago forced to confront a sharp turnaround in expectations. The S&P 500 retreated for a fourth day Thursday, falling into its worst stretch of losses this year.

Paradoxically, to some the escalation in trade war could be positive for asset prices as it would force central banks to become even more dovish: “A U.S. tariff hike on Chinese imports, should it materialize Friday, would hasten and broaden the policy easing cycle in Asia. Those central banks considering a shift to an easing bias would likely be a lot less hesitant in the event of higher tariff barriers” said Chang Shu, Chief Asia Economist at Bloomberg Economics. Earlier today, Peter Schiff suggested that the latest trade war incident is just the excuse Trump needs to force the Fed to either cut rates, or launch QE4, or both.

Responding to the latest developments, Credit Suisse South Asia CIO, Ray Farris, said “Our core view is that a deal is still more likely than not, but that following this tariff rate increase it may take some more time” adding that the “resulting market volatility is likely to provide buying opportunities in U.S. and Chinese equities and credit, but it is probably too early in this process to be confident.” He warned that the “clear risk is that the current U.S.-China talks in Washington end without any resolution and Trump is not able to announce any plans for a conversation with Xi.”

While China has denied the collapse in talks was its fault as the White House has charged, Trump seized on recent strong economic data as a sign that his trade wars are working and may even be boosting growth. Indeed, trade data released Thursday showed the U.S. trade deficit with China decreased to the narrowest in almost three years as imports slowed and exports advanced. Strong GDP and jobs numbers in recent weeks, but most importantly an all time high in the S&P, have also emboldened Trump.

“When people looked at the economic numbers, they were shocked. When they look at the import-export numbers they were shocked,” Trump said Thursday. “Try looking at all of the tariffs that China’s been paying us for the last eight months. Billions and billions of dollars.”

Yet while Trump insists that incremental tariffs will paid for by China most, economists counter that the rising costs will be absorbed by American companies and consumers, resulting in a burst of inflation just as the global economy is slowing rapidly, resulting in what may be the first episode of global stagflation in decades, the worst possible outcome for investors, as central banks will be prevented from intervening in capital markets if inflation is overly hot.

Finally, while it is anyone’s guess what happens next, rating agency Moody’s said that while it believes that a trade deal will eventually be reached between the U.S. and China, “the risk of a complete breakdown in trade talks has certainly increased.”

Higher tariffs by U.S. exacerbates the uncertainty in the global trading environment, further raises tensions between the US and China, negatively affects global sentiment and adds to risk aversion globally, according to Moody’s, which also warned that that the rise in tariffs “ccould also lead globally to the repricing of risk assets, tighter financing conditions, and slower growth.”

And now we await as CNBC pundits will explain how this outcome is the best possible one for stocks.