Warren Buffett Would Not Locate A Business In Illinois: Here’s Why

Warren Buffett would not locate a business in Illinois. His reason? Unfunded liabilities. 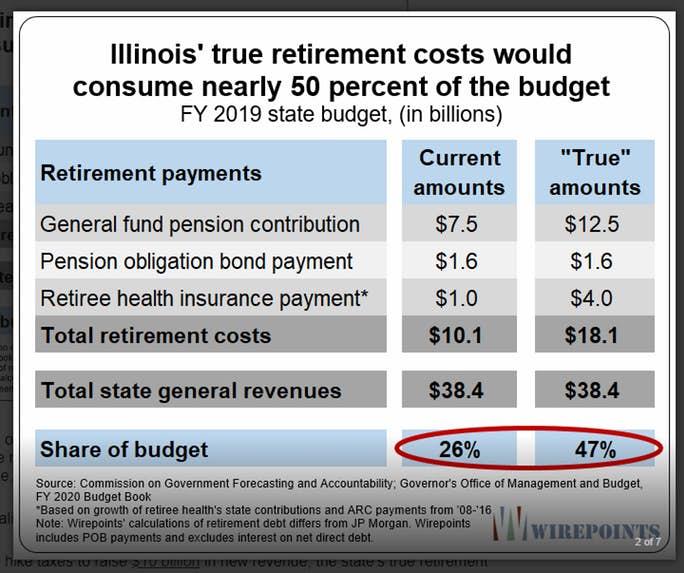 Betty Quick: There’s a question that came in from a viewer: “How do you see the unfunded pension liabilities across the United States affecting our economy over the next ten years?”

Warren Buffett: Well, if you’re talking about the corporate sector– the unfunded liabilities have been working their way down because all the new companies don’t go for defined benefit plans. In the public sector, you know, it’s a disaster.

If I were relocating into some state that had a huge unfunded pension plan I’m walking into liabilities. ‘Cause I mean, who knows whether they’re gonna get it from the corporate income tax or my employees– you know, with personal income taxes or what. But that– that liability isn’t gonna– you can’t ship it offshore or anything like that. And those are big numbers, really big numbers.

And when you see what they would have to do– I say to myself, “Why do I wanna build a plant there that has to sit there for 30 or 40 years?” ‘Cause I’ll be here for the life of the pension– plan– and they will come after corporations, they’ll come after individuals. They– just– they’re gonna have to raise a lotta money.

Betty Quick: I mean, when you say that the states that come to mind, having not looked at those statistics in a while, would be Illinois and New Jersey at the top of the list.

Warren Buffett: Well, as I say I praise by name and– criticize by category.

Already, more than a quarter of the state’s budget is consumed by retirement costs, largely the result of overpromised benefits. Illinois can’t handle it. The state has racked up billions in unpaid bills, multi-year operating deficits and credit downgrades. It’s now just one notch above junk, according to Moody’s.

But the problem is worse than it appears. The state’s ballooning retirement promises are actually far bigger than Illinois bureaucrats say they are. When the state’s debt costs are more properly and honestly accounted for, Illinois ends up beyond crisis levels. It would take nearly half of Illinois’ $38 billion budget to pay the true costs of the state’s retirements.

Simply put, Illinois is insolvent under most realistic financial measures.

To start with, most market-based groups calculate a much higher pension debt for Illinois, using discount rates of 4 to 6 percent. Moody’s, for example, uses a rate much closer to that used by corporations. Their calculation puts Illinois’ pension debt at $234 billion – $100 billion more than the official debt.

Wirepoints also analyzed what how much more it would cost the state annually if it contributed the actuarially required payments to its retiree health obligations – instead of the minimum pay-as-you-go contributions it makes today. That would require an additional $3 billion annually – creating a true annual payment of $4 billion.

Add up all the retirement costs and Illinois should be paying $18 billion dollars today – nearly 50 percent of Illinois’ $38 billion budget.

Paying almost 50 percent of the budget into public sector retirements is an impossibility. Diverting that much would slash the monies needed to fund Illinois’ core services and create chaos in an already dysfunctional state.

Illinois in Class By Itself

There are many more charts in the article that merit a closer look.

Here’s the fiscal reality. Illinois is an insolvent state that can’t pay its bills.