What Happens Next: Here Are The 3 Trade War Scenarios

For once Goldman’s Thursday prediction (which itself was a flip-flop from the bank’s prior baseline just days earlier) that the US would hike tariffs at midnight, was correct, even if the bank’s overly optimistic take on subsequent events, left many disappointed.

Of course, now that higher tariffs are in play, the follow up question is simple: what happens next. To answer that question, as the US-China trade war enters a decisive phase, BofA outlines three scenarios to help clients navigate the economic and market implications. As BofA’s Ethan Harris writes, agreeing with Goldman’s bullish take, the most favorable outcome is a near-term trade deal, with no additional tariffs. However, the risks have recently risen that the US and China will engage in more brinkmanship. Therefore, in the bank’s second scenario there is another round of tit-for-tat tariffs. After a brief period of uncertainty, an agreement is reached. The last and most devastating, if for now unlikely, scenario is a full-blown trade war.

Taking a step back, BofA – like most other banks – sees a very wide range of possibilities, ranging from a quick and market-friendly trade deal to a full-blown trade war. To keep things simple, BofA’s chief economist Ethan Harris boils his outlook down into three scenarios that capture the flavor of our view. Table 1 describes these scenarios and their implications for growth, policy and markets. Of course we acknowledge that there are many plausible outcomes even within each scenario. 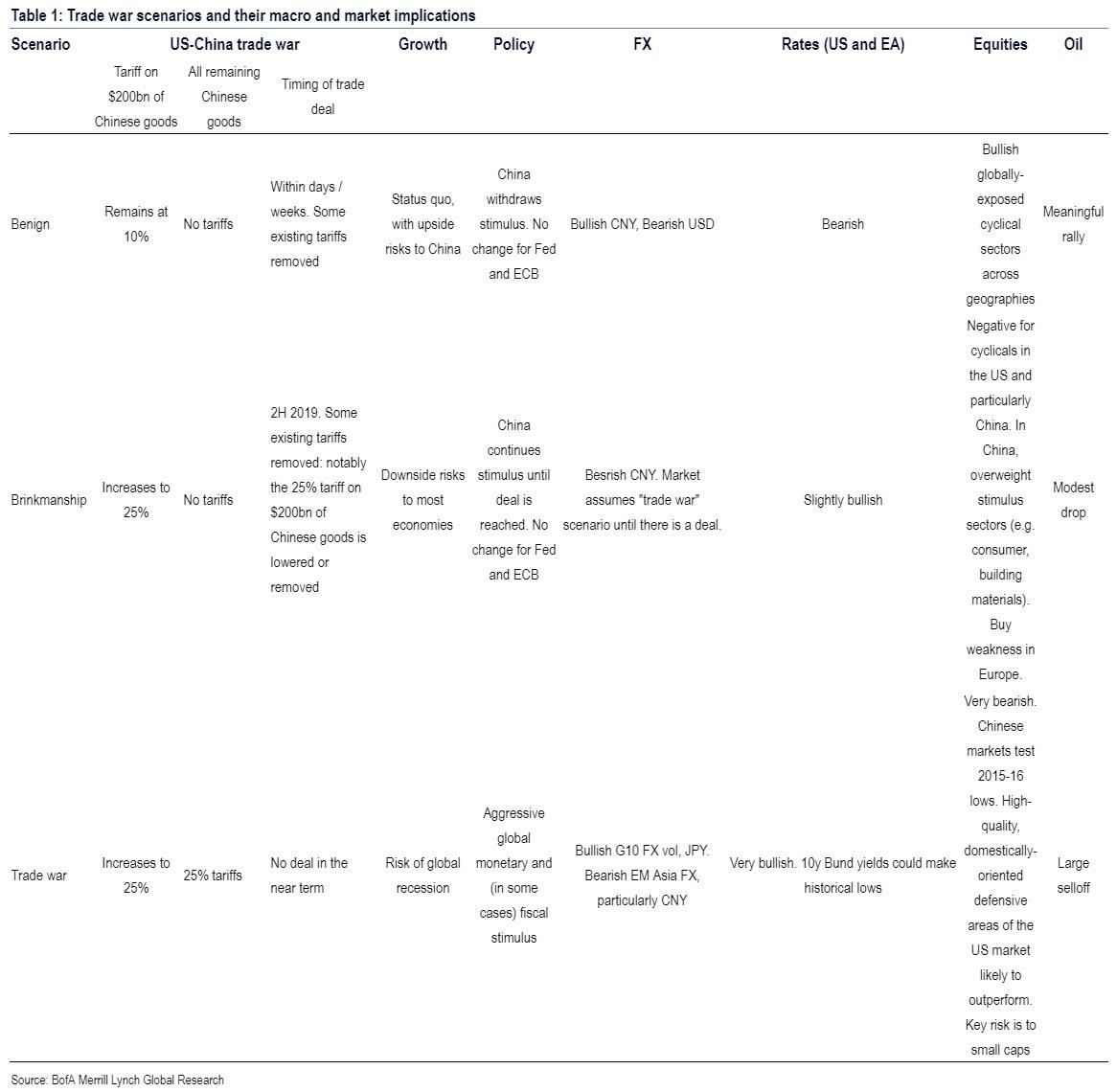 Here are the details on each possible scenario:

The best-possible outcome is that the US and China are able to reach a trade deal within a few weeks, if not days. In this scenario the US does not follow through on the President’s threat to raise tariffs on $200bn of Chinese goods from 10% to 25%. We also assume that some or substantially all of the tariffs that were put in place last year are removed, and that there is no escalation on the auto tariffs front. In this scenario the broad trade “war” becomes narrow trade “skirmishes” and is no longer a major headwind to markets or confidence. Until the President’s tariff threat the benign scenario was BofA’s baseline, and the reasoning was that the administration would avoid another round of tariffs because it understood the potential negative impact on the markets and the economy. BofA was also of the view that President Trump was eager to get a deal with China ahead of the 2020 Presidential election campaign. Now Harris thinks that it is a very close call, since both countries are on the verge of engaging in at least one more round of brinkmanship.

A more concerning scenario, which is as likely as the one above, is that the US increases the 10% tariff to 25% as negotiations continue. China would likely retaliate by raising tariffs on US-manufactured autos, among other goods. China might also clamp down on soybean imports once more: imports have been rising in recent months after a huge decline in 2018. BofA still expects a trade deal in this scenario, but brinkmanship continues for a number of weeks, during which uncertainty is elevated and there are threats of additional tariffs. As above, the deal, when it is finally agreed upon, would walk back some of the measures that are in place, including the latest 25% tariffs. In addition, since this scenario signals a more hawkish stance by the administration on trade, the US will ratchet up the rhetoric on auto tariffs once a deal with China is achieved. However the tariffs do not get implemented.

What is BofA’s reasoning? As the bank notes, its “no pain, no deal” framework still applies. But with the S&P500 close to its all-time high and with recent upside surprises in the macro data, the US administration might be willing to accept some pain in the markets in order to extract more concessions out of China. There is also the possibility that the Trump administration does not believe that the trade war negatively affected the markets. The issue is that when the markets were weak last fall, the trade war was escalating and the Fed was hawkish. During the recovery this year, trade tensions have cooled and the Fed has turned dovish. So the cause of the market moves is not entirely clear and it is possible that the President believes that the Fed, and not trade, was the real problem. This is what economists call an “identification problem.” For what it is worth, BofA’s event-study work shows that both the trade war and the Fed contributed similarly to both last fall’s selloff and the subsequent rally, until the latest trade shock (Chart 1). 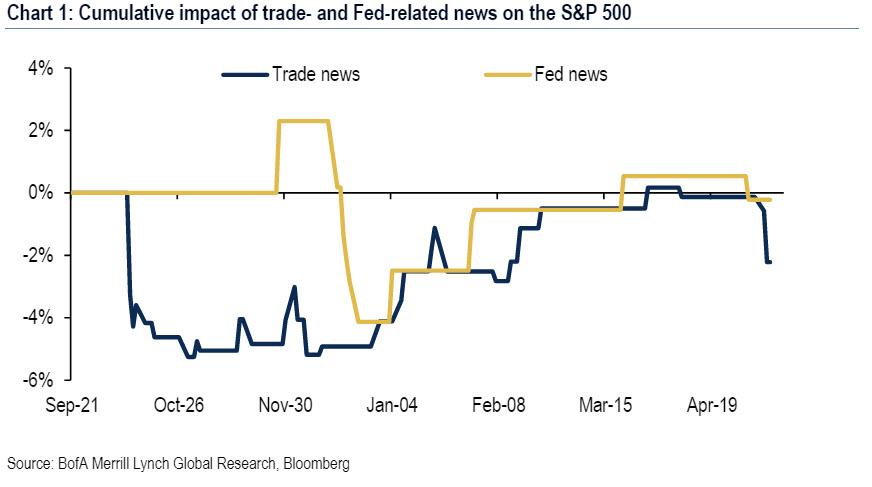 The reason BofA still expects a trade agreement is the following: with the Fed clearly on hold, any near-term market pain would now be clearly attributable to the trade war. With election campaign season also approaching, another bout of market weakness should get the US-China deal over the finish line. However if this scenario does materialize BofA sees downside risks ito its current growth forecasts in many regions.

Clearly, the most worrying scenario is a full-blown trade war. In this case BofA assumes that the US and China end up imposing 25% tariffs on nearly all bilaterally-traded goods. There is no trade deal in the near term, and there is escalation on the auto-tariff front after talks with China break down. BofA also sees a risk of a 20% tariff on all auto and parts imports with partial retaliation by impacted countries.

The good news is that the bank still views this scenario as very unlikely. There will be plenty of warning signs in the markets and the forward-looking data on the path to a trade war: more notably, Harris fails to see how the Trump administration would not be persuaded to back down at some stage, especially with the Presidential elections coming up next year. This is the same argument that Marko Kolanovic at JPM repeated constantly for much of 2018.

An imminent trade deal should allow the global economy to continue to grow above trend. In this case, Chinese growth could come in at 6.4% this year. In the brinkmanship scenario BofA sees downside risks to growth from higher tariffs and elevated uncertainty. A trade war, with across-the-board tariffs on US-China trade, would push the global economy towards recession. In terms of the policy response, China has the most flexibility in both directions; expect Chinese policymakers to continue to stimulate the economy until a deal is reached, but pull back stimulus thereafter. Major changes to Fed and ECB policy are only likely if there is a trade war.

In the US, a “brinkmanship” scenario threatens weaker growth. Up until President Trump’s latest tweet threatening an increase in tariffs, most analysts had been operating under the assumption that a deal would be struck without a tariff hike. The upside risk would come if the latest round of negotiations results in an earlier deal with a removal of all existing tariffs relative to the prior baselines.  The more likely outcome, however, is that we will see brinkmanship with some further tension in the trade negotiations before the deal is struck. Under this “brinkmanship” scenario – depending on how long it drags on – growth may end up being a tenth or two lower than our current forecast of 2.6% growth for this year as higher tariffs act as a headwind for consumer demand and investment. Additionally exports should slow modestly due to retaliatory tariffs. While a deal will likely be reached before year-end, some residual weakness will carry over into the start of next year, leading to a modestly weaker path of growth in 2020. On inflation, the core measures would be temporarily boosted this year. With only a limited reduction in growth and transitory impact on inflation, the Fed is likely to stay on hold with a dovish bias.

In the more serious “trade war” scenario, BofA warns of a notable deterioration in the growth outlook. Real domestic demand should slow significantly as higher tariffs eat away at the purchasing power of the consumer with a roughly half a percent boost to core inflation in 2019 before fading in 2021. Greater uncertainty around a trade deal should hold back business investment and the tit-for-tat tariffs by China will likely deal a huge blow to US exports, in particular agriculture goods, generating a weaker path of exports in 2019. Also, all this can be exacerbated by a market sell-off and tighter financial conditions. In this scenario, BofA expects growth in 2H 2019 to slow significantly, shaving 2019 annual growth by several-tenths and with no resolution in sight, growth in 2020 should slow to a low-1% handle, below consensus estimates of potential growth of around 2%.

The trade war scenario would trigger a preemptive cut from the Fed, potentially as early as September. With the economy expected to enter a growth recession in 2020, the FOMC may signal a strong commitment of additional cuts if needed in early 2020. The Committee will likely chalk up any acceleration in inflation as transitory and focus on stabilizing growth and financial markets.

Geopolitical shocks tend to results in short, sharp market pullbacks, most of which are recovered in the subsequent 3 months. Under a Brinkmanship scenario, a market pullback is likely to reverse upon resolution. But under a Trade War scenario, the impact to economic growth and confidence is likely to create further downside risk for equities. 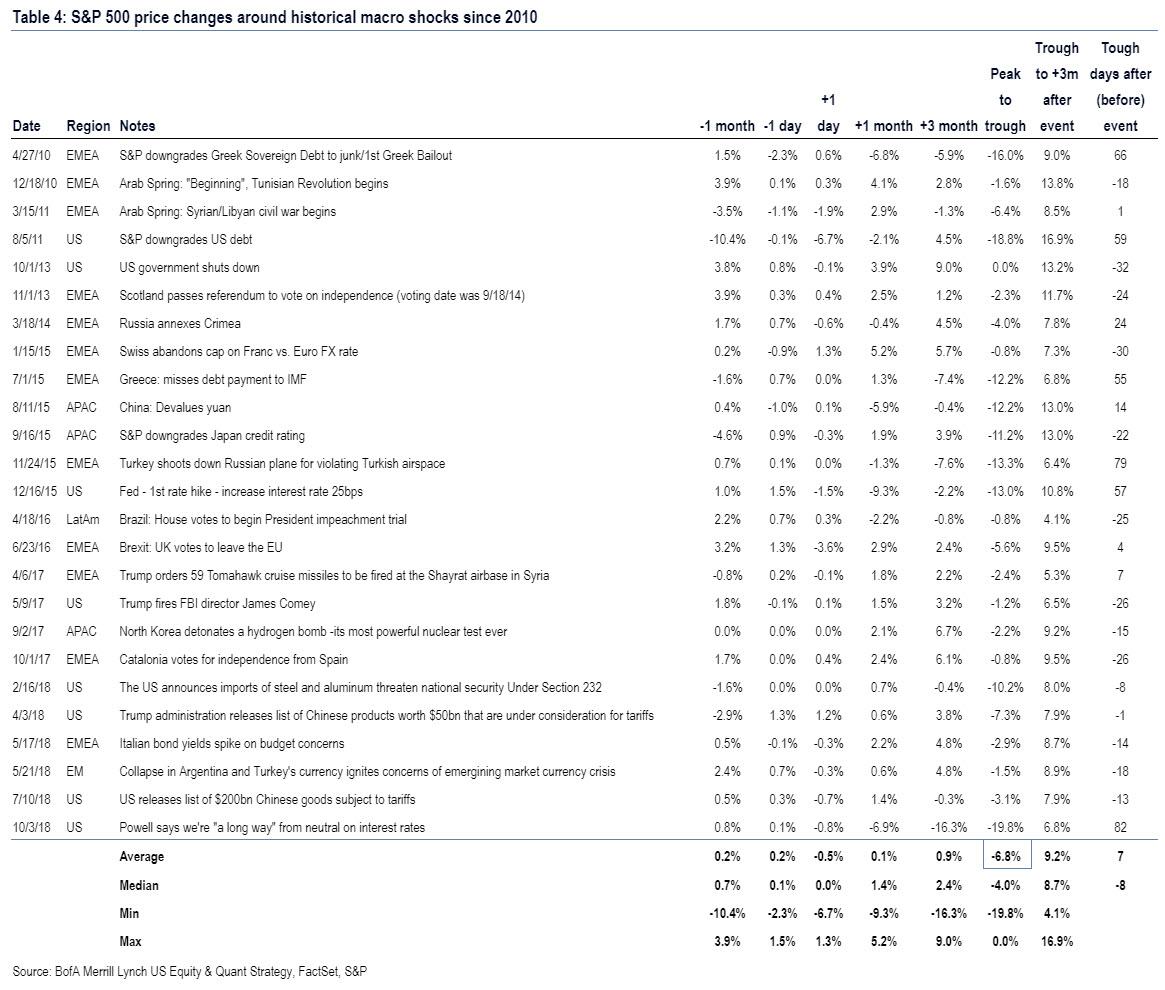