The Only Gold The US Will Show: The “Working Vault” At West Point

Every so often, US media coverage provides glimpses into the US Treasury’s gold reserves stored with the US Mint. While this coverage never documents any of the claimed “deep storage” gold of the US Treasury, it contains just enough suggestion for the populace to connect the words ‘gold storage’ and ‘US Government’, and then return to their daily routines, assuming that the US has the largest strategic gold reserves in the world.

Notably, these media features, which span mainstream financial media and coin / numismatic news sites alike, are also only ever limited to one single location where the US Mint stores gold, a ‘working vault’ at the US Mint’s facility in West Point, New York. Images of this vault will be familiar to some readers, images which contain various pallets of 400 oz gold bars in front of a US flag and the walls of the storage room strewn with many years of scribbled visitor signatures .

Such a media feature recently appeared on the WNYW network (Fox 5 New York) in April, when the Fox5NY crew took the trip about 2 hours north of Manhattan to the US Mint’s bullion depository at West Point.

Along with its bullion depository in Fort Knox, Kentucky, and its minting facility in Denver, Colorado, the West Point Mint, located adjacent to West Point military Academy, is one of the three claimed Mint storage locations for the US Treasury’s “deep storage” gold reserves, and according to the US Treasury, there are 11 storage compartments at West Point storing 54 million troy ounces, or 1682 tonnes, of United States Government owned gold reserves. Which would be just over 20% of the 8133 tonnes of gold that the US Treasury claims to hold.

The trouble is, despite numerous visits to the West Point bullion depository in recent years by numerous camera crews, photographers, reporters and journalists, there has never been any coverage of any of the 11 long-term gold storage compartments at West Point, nor any photos or videos of any of the 54 million ounces of gold that is claimed to be stored there. Merely repeated visits to this one ‘working vault’ in which a constantly changing working inventory of gold and silver bars used in the Mint’s bullion coin minting are temporarily stored.

While the Fox5NY report is pitched as a visit to the “treasure belonging to the US Treasury”, where “nearly a quarter of the U.S. government’s gold sits beneath a windowless building on the campus at West Point“, it was also to this working vault that the Fox5NY crew and its reporter Joe Toohey were led to by US Mint staff for the story published April 16.

“We’ve got approximately 54 million ounces here that we store, which is about 22% of the nation’s gold,” says Ellen McCollum, Superintendent of the West Point Mint, before the footage cuts to a graphic of the US Treasury’s claimed inventory of deep storage gold across Fort Knox, West Point and Denver, followed by shots of gold bars and silver bars in the West Point production inventory working vault. 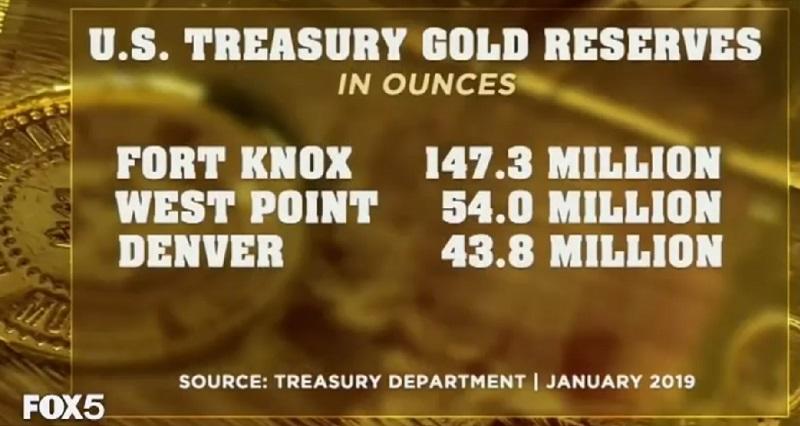 There is also no explanation in the Fox5NY report that they are in a working vault, and that the gold stored in that room is working stock production input for minting bullion coins, and nothing to do with the 54 million ounces of the US Treasury’s claimed ‘deep storage’ gold.

According to Toohey’s account, which is in the form of both a video and written report:

“FOX5NY was granted rare access – supervised of course – to one of their highly secure vaults. Officials had to cut a numbered seal to open it.”

Straight off the bat, this reference to cutting a numbered seal seems strange, and whatever this seal was, it is not the same as the official joint seals that the US Treasury claims to put on its long-term storage compartments (see example here), and that are put there by a joint audit committee of Treasury and Mint officials who have audited United Stated Government owned gold. By definition, with gold and silver regularly moving in an out of this working vault storage area, the contents of this vault are not static and could not be subject to official joint seals of audit committee.

The Shifting Inventory in the Working Vault

That the contents of this working vault are not static can be observed in a number of ways. When Toohey and the Fox5NY crew visited the vault in April 2019, there were “2,600 bars of gold bullion” in the vault, with each bar “worth about $500,000”, and ”about $1.3 billion worth of gold”.

When CoinNews.net’s Darrin Lee Unser visited the same vault in July 2014, which he described as “the vault of working bullion”, there were “3,592 gold bars on the day of our visit, July 22, each worth about $524,100 for a total value of almost $1.9 billion”. These gold bars, said Unser, were “only passing through, purchased on the open market to make gold coins.”

Photographer Scott Eells for Bloomberg also visited this same working vault in early June 2013 (his photo captions say 5th June), and captured an interesting shot of a sign showing the exact gold contents of the vault on that day, which claimed that there were 4,281 gold bars, each weighting about 400 ozs and each valued at $558,600, for a total of 1,710,213.113 troy ozs. See image here. 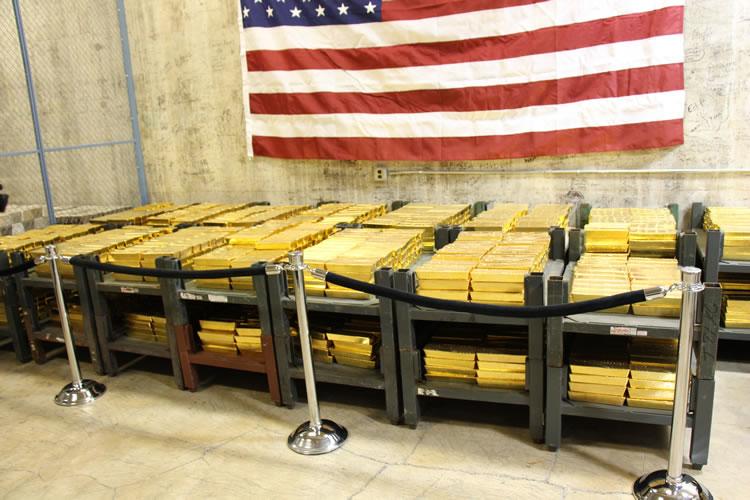 With plenty of media visits to West Point’s working vault, it’s not surprisingly that it is well documented with many photos and a few videos. These photos and videos also show the shifting contents of the vault over time, with varying numbers of pallets of 400 oz gold bars, and rows of pallets.

The Scott Eells images for Bloomberg from June 2013 can be seen on the Getty website here. While numerous, they are mostly close ups of 400 oz gold bars.

The US Mint YouTube page hosts a short video (1:13 minutes) of the working vault here, showing the gold and silver bars. The Getty website also has a short video of this vault, filmed 6th June 2013 by Bloomberg. The video, which is 1:12 minutes and mostly pans over the gold bar pallets, can be played on a page at this link.