No kidding – this is not our headline, but Newsweek’s: “US Special Forces School Publishes New Guide For Overthrowing Foreign Governments” – and as far as we can tell they are the only major mainstream outlet to have picked up on the fact that the US military is now essentially openly bragging on past and future capabilities to foster covert regime change operations.

The 250-page study entitled “Support to Resistance: Strategic Purpose and Effectiveness” was put out by the Joint Special Operations University under US Special Operations Command, which is the Army’s official unified command center which overseas all joint covert and clandestine missions out of MacDill AFB, Florida.

“This work will serve as a benchmark reference on resistance movements for the benefit of the special operations community and its civilian leadership,” the report introduces.

The study examines 47 instances of US special forces trying to intervene in various countries from 1941-2003, thus special attention is given to the Cold War, but it doesn’t include coups which lacked “legitimate resistance movements” — such as the case of ‘Operation AJAX’ in 1953 which overthrew Iran’s democratically elected Prime Minister Mohammad Mosaddegh.

Though infamous disasters such the abortive CIA-backed Bay of Pigs invasion of Cuba are highlighted, the US military report (perhaps predictably) finds that among those nearly fifty covert interventions surveyed, most interventions were “successful”.

“One thing common to all 47 cases reviewed in this study is the fact that the targeted state was ruled either by an unfriendly occupying force or by a repressive authoritarian regime,” the author, Army Special Forces veteran Will Irwin wrote. The study focuses on historical regime change operations but in parts hints at the future, saying, “Russia and China have boldly demonstrated expansionist tendencies.”

Success vs. Failure data from the new US military study published earlier this week entitled Support to Resistance: Strategic Purpose and Effectiveness 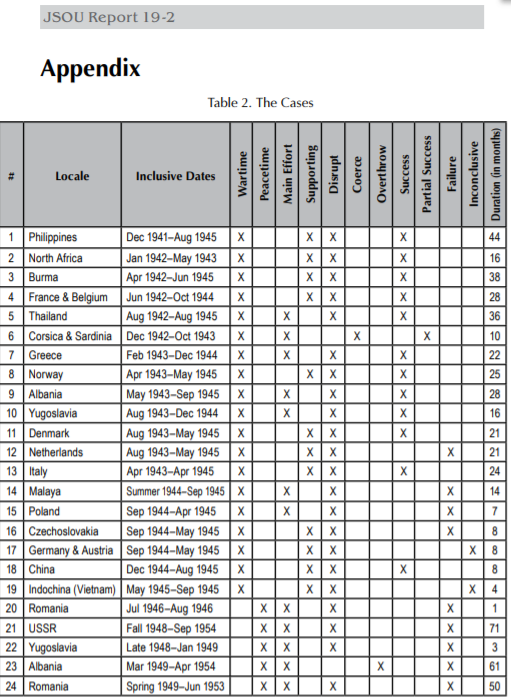 It also asserts that unrest across the Middle East since the fall of the Soviet Union should ultimately be blamed on the legacy of past Soviet policy and failures, rather than on the United States.

Newsweek summarizes of the study’s conclusions:

Of the 47 cases analyzed, 23 were deemed “successful,” 20 were designated “failures,” two were classified as “partially successful” and two more—both during World War II—were called “inconclusive” as the broader conflict led to an Allied victory anyway. Coercion was the most successful method at a three-quarters rate of success or partial success, while disruption worked just over half the time and regime change only yielded the desired result in 29 percent of the cases reviewed.

And further another interesting element involved the failure of operations which intervened in countries “under peacetime conditions”:

Other major findings included observations that most operations “were carried out under wartime conditions, with those being nearly twice as successful as cases conducted under peacetime conditions” and “support to nonviolent civil resistance seems to be more likely to succeed than support to armed resistance.” At the same time, they were also “most effective when conducted in direct support of a military campaign rather than as an independent or main effort operation.”

The report identifies about half a dozen governments from Indonesia to Afghanistan to Serbia to Iraq that were “successfully” overthrown by US operations, but in many more cases identifies covert “disrupt” operations for a desired outcome. 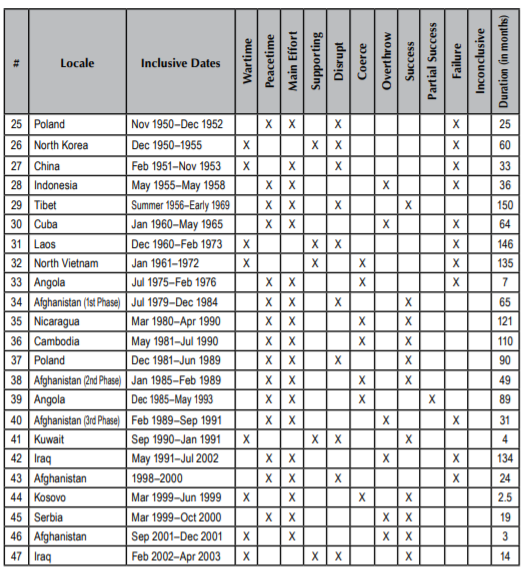 The study did not include within its scope current US involved proxy wars which have unfolded in the past decade, such in Syria or Libya or Ukraine, but only mentions these in passing.

In concluding remarks the author acknowledges that the study could help “explore ways the timely application of SOF capabilities” can influence “resistance movements” which are becoming increasingly violent, “thereby possibly helping to prevent the next Syria”.

Whether this means swifter action would have resulted in quick regime change in Syria or if the study author believes US support to the “rebels” was doomed from the beginning remains unexplored.