James Baker, a career government attorney who wound up as the the FBI’s top lawyer (general counsel) in 2014, says he’s ‘nervous‘ about DOJ Inspector General Michael Horowitz’s internal investigation into FBI/DOJ conduct surrounding the 2016 US election.

Sitting down at the Brookings Institute with Lawfare’s Benjamin Wittes, Baker made clear that he wanted to speak “as openly as I possibly can” about the origin of the FBI’s investigation into Donald Trump – “to reassure the American people that it was done for lawful, legitimate reasons, and was apolitical,” reports the Washington Examiner‘s Jerry Dunleavy.

For those keeping track, we’ve gone from “there was no spying,” to “the FBI used an informant on the Trump campaign, just don’t call him a spy,” to “ok there were multiple informants – still not spying.”

And so while Obama-era officials have scrambled to perform damage control ahead of negative potential outcomes, Attorney General William Barr, James Clapper, and the CIA’s former chief of counterintelligence (among others) have concluded that the Obama admin absolutely spied on Donald Trump and his campaign.

Barr, meanwhile, has launched a wide-ranging investigation into FBI conduct during the 2016 election, making him public enemy #1 to the left. Consequently, Democrats are now working overtime to discredit him less than three months after he ‘sailed through‘ his confirmation hearings (on the Kavanaugh scale) due to his distinguished career in Washington. Barr currently sits in contempt of the House Judiciary Committee after refusing to turn over an unredacted version of the Mueller report – despite the fact that not one Democrat has viewed the 98.5% redacted version the DOJ made available to members of Congress. 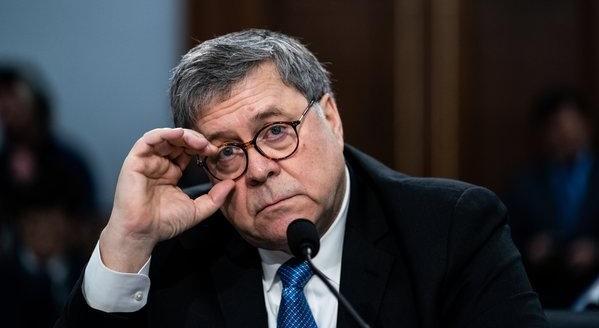 After Barr’s “spying” bombshell, former FBI Director James Comey said he had “no idea what the heck he’s (Barr) talking about,” while last week Comey said he thinks Barr has acted “less than honorable,” and has “lost most of his reputation.”

James Comey believes Attorney General William Barr acted “less than honorable” in the way he previewed the Mueller report with his summary, press conference, and still “continues to talk as if he is the President’s lawyer” #ComeyTownHall https://t.co/69UAoPP9Re pic.twitter.com/5SGh6ILFRO

And in in what appears to be the latest in an attempt to get ahead of the narrative, James Baker – the Obama/Comey FBI’s top lawyer, sat down with Benjamin Wittes at Brookings to defend the agency’s conduct.

And Baker is nervous.

Asked by Wittes “So, how nervous are you about the IG”? in reference to Inspector General Horowitz’s FISA investigation, Baker responded that he’s “always nervous about the IG,” and that “they’re coming in after the fact to look at what we did.”

Baker added that during the chaotic 2016 election, the FBI was “trying to do it in real time and having the pressure to deal with these threats as they were coming,” while dealing with the backdrop of alleged Russian hacking of Democratic emails.

He also stuck with the official story as to what predicated the FBI’s counterintelligence operation on the Trump campaign, dubbed “Crossfire Hurricane” — On May 10, 2016 Trump adviser George Papadopoulos told Clinton ally and Australian diplomat, Alexander Downer, that Russia had ‘dirt’ on Hillary Clinton. Downer told Aussie intel, which told the FBI, which launched Operation Crossfire Hurricane.

Nowhere did Baker mention Joseph Mifsud, a Maltese professor and self-professed member of the Clinton Foundation who is the genesis of the Russian ‘dirt’ rumor – planted it with Papadopoulos several weeks after returning from a trip to Moscow.

While the Mueller report paints Mifsud as a Russian agent, evidence points to him being in league with Western intelligence – which raises the notion of entrapment if Papadopoulos was set up by a Clinton ally, later to be pumped for information by a ‘five-eyes’ Clinton ally at a London Bar, which officially launched the investigation.

Last week, Rep. Devin Nunes (R-CA) has requested a wide swath of documents about Mifsud from several federal agencies. As the Washington Examiner noted, Nunes – the House Intelligence Committee ranking member, “seeks information about who Mifsud was working for at the time and wrote in a letter that special counsel Robert Mueller “omits any mention of a wide range of contacts Mifsud had with Western political institutions and individuals” in his report on Russian interference in the 2016 election.”

No wonder Baker is feeling a bit on edge.

When asked about how confident he is that the FBI opened the Trump investigation for legitimate reasons and not a ‘coup,’ Baker maintained that everything was on the up and up, and that there was “no way in hell” he would have allowed a ‘coup attempt’ against Trump.

As for the FISA surveillance on Trump campaign aide Carter Page, Baker defended the FBI’s use of the infamous Steele dossier in its application – saying that after personally reviewing the FISA applications, he was “comfortable” with them and confident that the process remained “lawful.”

Of course, in recent days we’ve learned that the State Department and the FBI absolutely knew that the Steele Dossier was a political document of dubious legitimacy, and its author, former UK spy Christopher Steele, was working for Clinton/DNC-funded opposition research firm Fusion GPS to produce the document.

And Baker said the FBI was careful in the way it used Steele’s reporting. “We have an obligation to take that information seriously and to be highly skeptical … You go to work … You try to validate it … We don’t just swallow it hook, line, and sinker. … We spent a lot of time trying to vet that information line by line,” he said.

Steele has come under increased scrutiny in recent weeks. The Wall Street Journal reported that Horowitz “is homing in on” and “has been asking witnesses about” the FBI’s “treatment of information” provided by Steele. And the New York Times reported that the FBI reached out to some of Steele’s foreign sources and as early as January 2017 agents had reportedly concluded that some of the dossier’s contents may have been based upon “rumors and hearsay” which were “passed from source to source.” The agents believed that some of Steele’s information may have even been based upon “Russian disinformation.” –Washington Examiner

For more insight into where Obama-era US intel officials are coming from, the entire Baker interview can be seen below: