Goldman: If The VIX Surges On A Small Selloff, What Would It Do In A Crash?

One of the more remarkable dislocations in the market in recent weeks, was the abnormally sharp spike in the VIX (implied vol) even as realized vol, and the drop in underlying stocks, remained rather muted.

Indeed, as BofA noted in “dude, where’s my melt up“, despite a relatively low VIX for much of 2019, implied volatility in equities and credit markets remains significantly higher than realized volatility (17% vs 10% in US equities), and as shown below, is on par with the biggest market dislocations of the past 4 years.

On Monday, Goldman joined the chorus, pointing out that “China trade war escalation drove a small SPX sell-off but big spike in the VIX.” As the bank’s derivatives strategist, Rocky Fishman writes, “while last week’s sell-off was only 4% from intraday peak to trough, equity option markets reacted to the sell-off strongly (particularly on Tuesday, before under-reacting on Friday).” Among the various “overreactions” highlighted, term structure inverted sharply, skew spiked, and the VIX’s increase significantly exceeded what realized vol or the spot sell-off would imply.

Furthermore, and confirming what BofA’s Fund Manager Survey has noted for many months, namely that “Trade War” remains the top tail risk in the market…

… with term structure hitting one of its most inverted moments of the last few years, markets were implicitly pricing the trade negotiations as if they were one of the most important catalysts we’ve had for years, though as Goldman once again points out, even with the tariff deadline taking effect the SPX is within 3% of its high (by comparison, the Shanghai Composite is now down over 10% from its April highs). 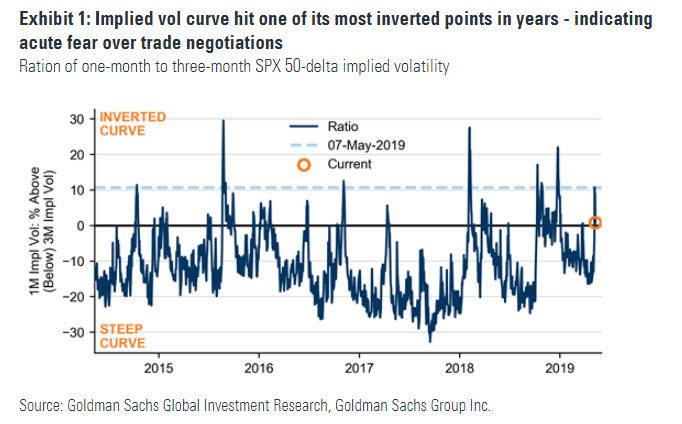 Which brings us to the key question: is implied vol too high, or is realized vol too low? Or, as Fishman frames it, if the VIX rises 10 points on a 4% sell-off, what would it do on a larger downturn?

As Goldman responds, judging by the reaction of vol and skew to the limited actual SPX volatility we saw last week, the next large sell-off will not initially see vol under-react like it did in the early stages of Q4. And while Goldman does not see danger from positioning in VIX markets, another growing concern is liquidity, because as “volatility subsided in April, SPX futures’ top-of-book depth did not quite get back to the level they reached in September (just before the Q4 sell-off).” As a result, “hedging continues to be timely – especially with 6-12 month puts continuing to have lower-than-usual.”

Here are some more details from Fishman:

An unusual characteristic of last week’s volatility was that the implied vol curve inverted (short-dated vol rose above longer-dated), at times sharply, despite the absolute level of implied volatility not reaching an extreme. Specifically, 6-month implied vol reached the lowest it has been in over a decade during a moment when it was below 3-month implied vol. 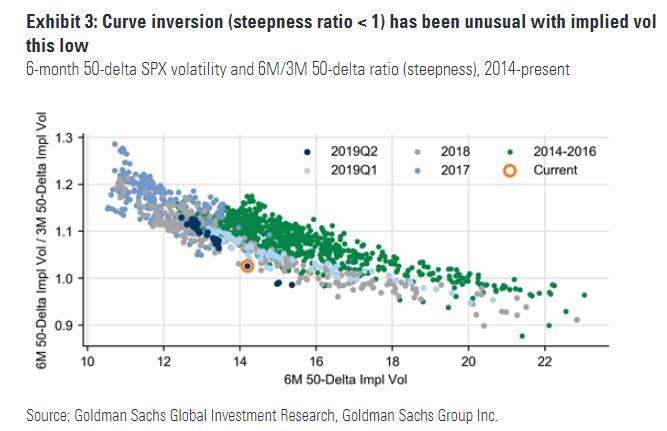 The takeaway from this according to Fishman, is that markets were implicitly viewing Friday’s tariff deadline as a key near-term catalyst that was unlikely to lead to a sustained high volatility period – despite the potential for transport time to make the deadline a “soft” deadline.

As for the ongoing decline in liquidity, Goldman notes that the $10mm median top-of-book depth for SPX E-mini futures last week was a sharp drop from the previous week’s $23mm median, but a drop that is to be expected with heightened volatility. 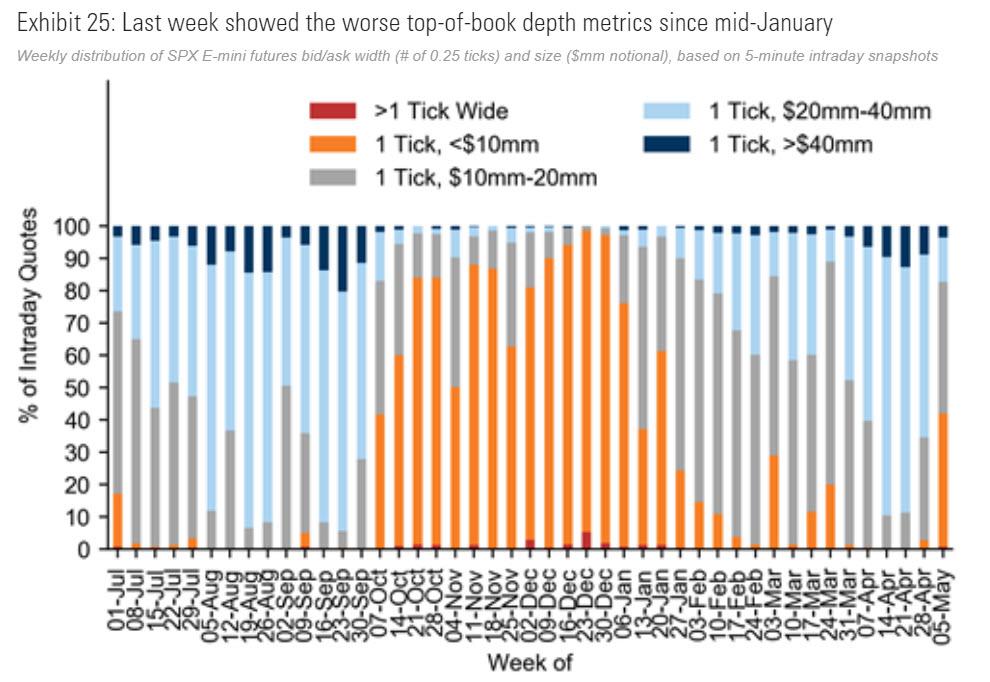 Still, with SPX E-mini futures trading $360bln/day of notional last week – a volume that would be consistent with realized vol well over 20% (though close-to-close realized vol last week was only 13%) – in the context of strong index volumes, top-of-book depth metrics could have been stronger. 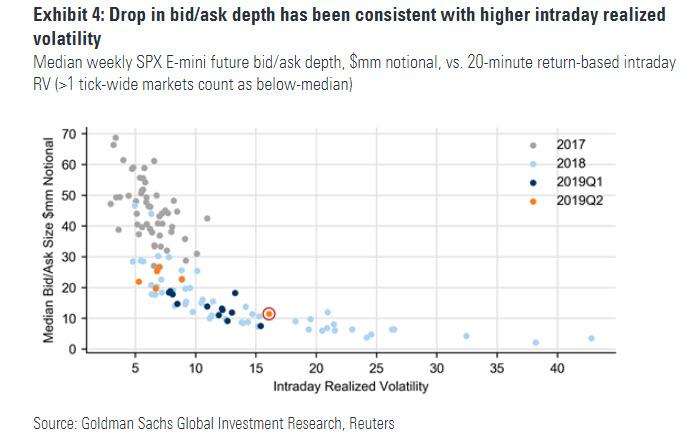 In short, don’t expect VIX (or implied vol) to drop from here. Instead keep an eye on realized vol, which as shown below tends to follow implied vol… 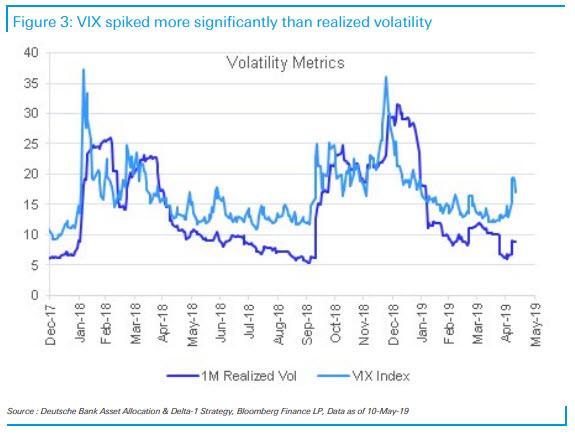 … to determine how much stocks will drop from here as traders realize what BofA said last night, namely that for a trade deal to happen, stocks will have to experience much more pain first...