Ever since hedge funds started to chronically underperform the market about ten years ago (around the time central banks took over as Chief Risk Officer of the stock market, and also around the time SAC crashed everyone’s party and made use of “expert networks”, i.e. inside information, illegal), investor interest in 13-F filing season which takes place roughly 45 days after the end of the fiscal quarter, has been declining as there is virtually no signal to be gleaned from i) knowing what stocks hedge funds own and ii) certainly what stocks they owned 45 days ago.

Yet there was one specific filing that traders were curious about: that of Warren Buffett’s Berkshire Hathaway, which was reported late on Wednesday, and which showed that as March 31, 2019, the Omaha billionaire owned just under $200 billion worth of stocks (as a reminder 13F don’t disclose shorts, or most other asset classes).

The reason for the interest is because as was recently report, in the first quarter Buffett, who is notorious tech-shy, made another tech investment (after his infamous and disappointing IBM wager), this time in Amazon.

The size of Berkshire’s Amazon holding, an investment which was made not by Buffett’s but by one of his deputies, gave more clarity to the bet Buffett disclosed days before his annual shareholder meeting earlier in May. Additionally, as shown in the table below, Berkshire spent the first three months of the year increasing his holdings in JPMorgan and Red Hat and paring investments in Southwest Airlines, American Express and Wells Fargo, according to the latest 13F. 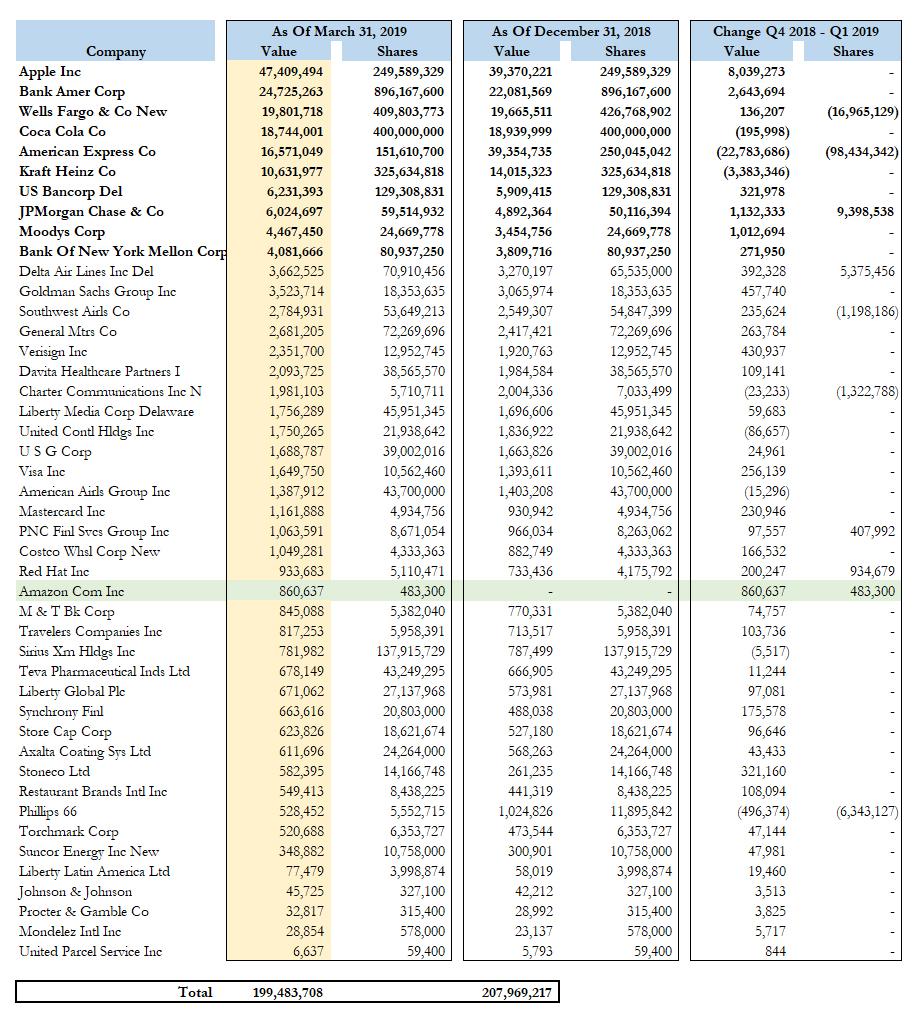 As Bloomberg notes, Berkshire deepened its ties with Amazon in recent years:

The companies teamed up with JPMorgan Chase & Co. to form a health-care venture, led by Atul Gawande, that will focus on improving services and costs for their employees. Combs, also a member of JPMorgan’s board, has played a role in the formation of that venture.

Some other observations from the just filed 13F: