Between Trump tweets and Chinese whispers via state-controlled media, it can be difficult to pinpoint precisely where things stand in the ongoing battle between the world’s two economic superpowers. Saxo’s Christopher Dembik says the CNYUSD rate is the best proxy we have. Here’s why.

Submitted by Christopher Dembik of SaxoBank

As Saxo Head of FX Strategy John Hardy and I both mentioned, we need to look closely at the Chnese yuan this week. In my view, the yuan fixing is the right proxy to understand how the US-China trade negotiations are going. And it isn’t pretty! Since the end of last week, the yuan/dollar fixing has been cut by 45pips to 6.8365. As negotiations are probably going nowhere in the coming days, we could see the fixing moving closer to 6.90. However, I don’t think that the psychological threshold of 7.00 could be reached as it would have deep negative consequences on local firms that use their CNY profits to repay their USD debt. A large devaluation is still a risk but is not the central scenario for the Chinese authorities. 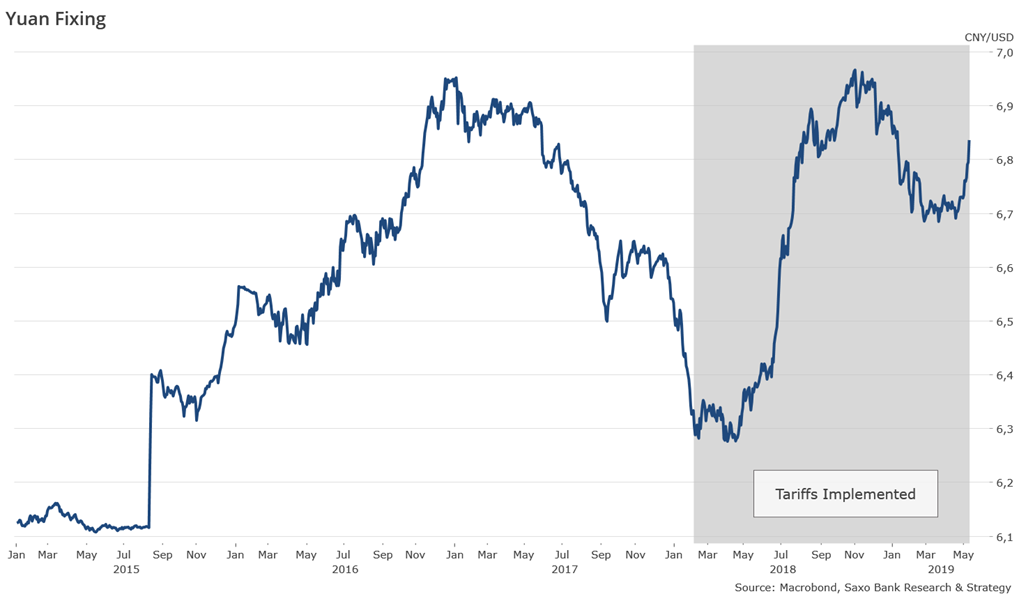 Yesterday evening, senior Trump administration officials tried to appease tensions. US secretary of the Treasury Mnuchin confirmed, without giving much detail, that the US-China trade talks are still ongoing. The tone is clearly different in China where the official media, such as CCTV and People’s Daily, adopted a tougher stance. It is interesting to note that in the previous rounds of trade disputes that occurred since Autumn 2018, People’s Daily articles mostly used the term “trade friction” instead of “trade war” until now… As of yesterday, all the articles and TV reports mention “trade war”. This terminology change means a lot and confirms that the negotiations have entered a more dangerous phase. In addition, China has tightened its “national security” review for foreign investments, which can be considered as another step in the retaliation process.

Looking at the initial reaction of the market yesterday, it is likely that the USD will not benefit from the trade war, contrary to what happened in 2018, as investors expect its main US impact would be to damage the economy and increase the likelihood of Fed rate cut this year. Investors are betting that there is a 60%-70% probability that the December 12 Federal Open Market Committee will see a rate cut. Policymakers are starting to pay attention and it may influence forward guidance in the upcoming June meeting by increasing the focus on the market reaction to the trade war and macroeconomic effect of higher tariffs (leading both to higher inflation and less growth which wwould pose a serious policy dilemma to the Fed). 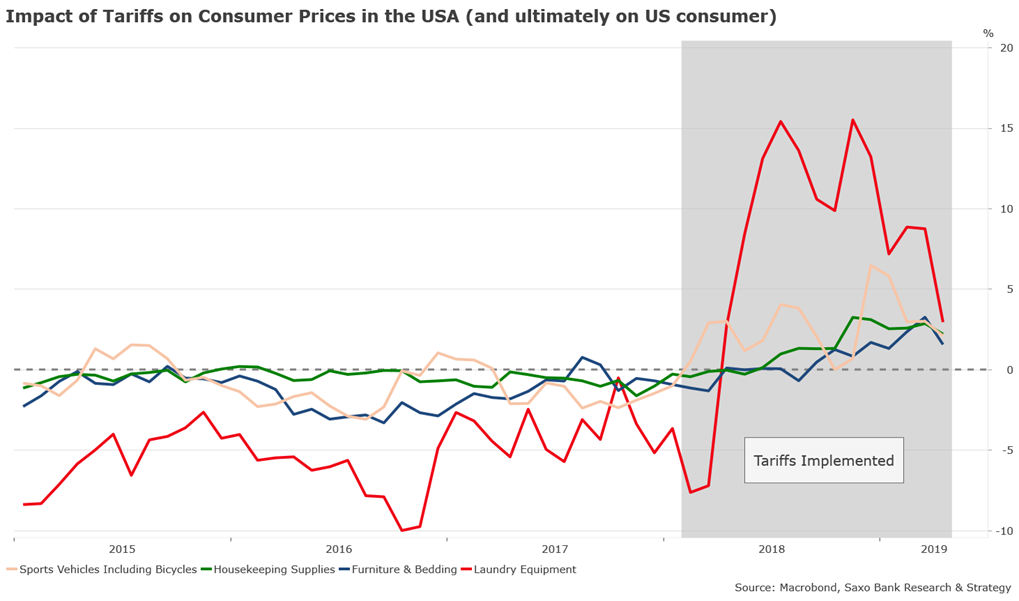 On the US domestic front, President Trump is now seeking $15 billion to bail out farmers in order to mitigate the negative impact of the trade war. Interestingly, more and more Republican Congressmen that were interviewed yesterday on US TV were very vocal against the latest measures decided by the Trump administration. It is, however, unlikely to have any influence on the ongoing process or to push the administration to comprise with Beijing. Trump is looking at polls and the message they send is bright and clear: as of yesterday, 42% of US voters supported Trump’s policy (FiveThirtyEight). His electoral base has remained stable, faithful and very broad since he was elected.

In coming days and weeks, the market reaction will be key to monitor, and it may have a much important impact on Trump’s will to compromise with China than any other factors. So far, risk-aversion has been contained. The VIX is revolving around 20, still far from the risk zone of 22, but we should expect a sudden spike in volatility as the wrestling match between China and the USA continues. Our central scenario has not changed. Though the probability of an agreement has decreased, it is still likely to happen but not as early as expected.

The latest events do not prove that there has been a breakdown in trust between the two parties, but it will certainly be much more complicated to reach a fair and balanced agreement due to recent tensions. I fear that China will be reluctant to compromise at first as it could be perceived that its position is dictated by outsiders. Paradoxically, the “close relationship” between the two presidents could be a disadvantage in the negotiation process. If we remember the negotiations between the Soviet Union and the USA in the 1970s as part of arms control talks, there was little trust between both countries and certainly no privileged relationship between the two leaders. However, they understood it was their common interest to find a middle ground. Such a situation is not that certain as it seems abundantly clear that President Trump is convinced that tariffs will mainly hurt China and benefit the USA.

The first real deadline is June 28, at the occasion of the G20 meeting in Japan, that could be the opportunity for both countries to find a solution regarding the last points of disagreements. In case of failure, it would open the door to a nastier course of events this summer and potentially the implementation of list 4 tariffs.