Shorts Beyond Crushed As Fake Meat Company Soars 250% Since IPO

Uber and Lyft may be ruing the day they went public, but the limit is beyond the sky, so to speak, for sellers of fake meat in this second tech bubble.

Ever since going public at $25/share two weeks ago, Beyond Meat has barely had a down day, and on Wednesday its torrid levitation accelerated, pushing shares to a new record high above $90, exceeding even the most bullish sellside target according to Bloomberg.

The “narrative” catalyst for today’s move is reportedly the news that Tim Hortons will start testing new breakfast options made with Beyond Meat faux-meat sausages.

As for the fundamentals… well, for the three fundamental analysts left who still haven’t jumped out of a window, Beyond Meat is trading beyond mere multiples, with its market cap of $5.23 billion more than 58 times its LTM revenue.

Meanwhile, the stock is trading beyond euphoric levels, and it has now surged beyond its highest price target of $81 from Bernstein from analyst Alexia Howard, who initiated with an outperform rating last week, after predicting that the company could reach sales of $2 billion over the next decade (from $88 million currently) if it increases its share in the alternative meat market to 5% from 2% today. Of course for that to happen, it assumes that none of the established names in the space will join the beyond meat frenzy… which they will of course, as there are virtually no barriers to entry (incidentally the only other analyst covering the stock, Erlan Abdikarimov of Freedom Finance, cut shares to hold on Monday while keeping his $28 price projection – please keep him in your prayers tonight).

But seriously, the real reason why the stock has exploded to beyond ridiculous levels is that as bulls pile in, the bears have also arrived, only for now the former are overpowering the letter, resulting in what is almost a beyond Volkswagen short squeeze. With 43% of Beyond Meat’s float sold short, the shorts have been beyond crushed in what appears to be one giant, slowly unfolding squeeze. BYND is also one of the top 20 most-shorted U.S. companies, according to financial analytics firm S3 Partners, which means that the squeeze can continue for a long time until the weakest hands and those with the least tolerance for margin calls finally capitulate. 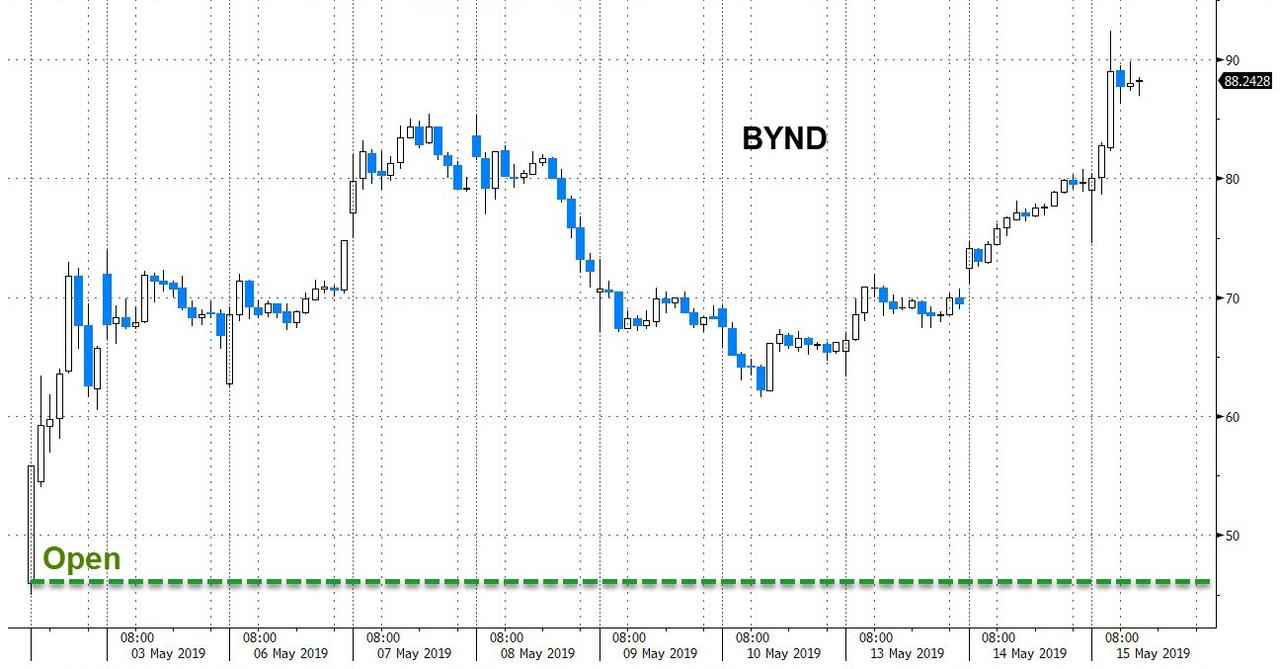 Appropriately, Beyond Meat’s IPO was the strongest since the 2008 financial crisis, and the stock is now up about 250% since its May 1 debut.