How Low Will The S&P Fall Before Trump Capitulates To China? JPMorgan Has The Answer

Three days after we published our take on the latest Flows and Liquidity report by JPMorgan’s quant Nikolaos Panigirtzoglou, whose conclusion was “problematic” as it contradicted the hypothesis previously laid out by JPM’s more recognizable (at least to the broader public) face, Marko Kolanovic, with the Greek strategist stating that any assumption that institutions or retail investors are underinvested is wrong, and instead finding that “neither institutional nor retail investors are currently underinvested in equities. In fact we find that the opposite appears to be true…”, Kolanovic has responded (just as expected, “always on an uptick“), and not surprisingly, has stuck to his core argument, stating that “overall, positioning remains muted, and absent new geopolitical escalations, equity downside should be limited. This is consistent with our last report, where we pointed out that pullbacks are likely to be less severe compared to those last year.”

In other words, one banks, two world class quants, two diametrically opposing conclusions. Good luck humans trying to figure out how to trade this market.

In addition to the now traditional “good quant/bad quant” back and forth between JPM’s Croat and Greek quants, Kolanovic also provides a brief discussion on the current “client” climate, writing that the “clients we’ve spoken to are trying to grasp the implications of the political landscape and 2020 elections.” What appears to be the source of confusion, is why Trump would risk destabilizing the market and economy just over a year before the 2020 elections, by escalating the trade war with China, a feud that could result in both a sharp market, as well as a recession, both of which would undermine Trump’s re-election odds. Here is Kolanovic:

Based on the current polls, it seems most likely that the presidential candidates will be Trump and Joe Biden. It also seems that Trump stands a good chance to get re-elected unless there is an economic deterioration in the US. Despite the  ongoing stimulus in China and a solid US economy, it’s possible we could have a slowdown or a recession if the trade war escalates further, which would likely lower Trump’s chances of winning in 2020 due to the potential selloff in US stocks, direct GDP impact of trade breakdown, increasing consumer price inflation, etc. It should thus come as no surprise that some Democrats would welcome this path. One should keep in mind that academia, businesses, and central banks have written extensively on the counterproductive impact of trade tariffs. This was well summarized by the late president Ronald Reagan and more recently Larry Kudlow. The stock market is indicating that the trade tariff approach is likely detrimental to the value of US businesses and hence the US economy.

With the above in mind, and noting that China has various additional levers to pull to preserve the status quo, such as “control of monetary and fiscal authorities and even the ‘National Team’ to support the stock market (i.e. the actual “Plunge Protection Team”)”, Kolanovic goes back to his argument from early 2018, according to which Trump is ultimately a rational entity, and as a result, “trade war will get resolved and that latest trade escalation is just a short-term hurdle, before favorable terms for the US are reached.”

Finally, one day after JPMorgan’s other Croatian strategist (and Kolanovic’ co-worker), Dubravko Lakos-Bujas, the bank’s chief US equity strategist said that if US-China trade talks fully collapse, “the S&P 500’s next 12 months’ per-share earnings will take a ~$9 cumulative hit, sending the S&P down about 11% from Wednesday’s close” to around 2,550, Kolanovic recalculates what may be the most important number for the stock market – the “Trump Put”, or the level on the S&P at which Trump will concede a loss to China and capitulate to Xi Jinping.

According to the JPM quant, the US administration has made it apparent that “the tone and sentiment towards the trade war changes with roughly ~100 points on the S&P 500.”

In this context, Kolanovic introduced the concept of a ‘Trump put’ in 2017, which the strategist writes has “now evolved into a ‘Trump collar’ (i.e. limited upside due to escalation of the trade conflict).”

Needless to say, for the market there are two critical numbers: the Trump put, and the Powell put – these represent the maximum dropdown in stocks that the two most powerful people in the world will allow the S&P to drop before intervening to preserve the “wealth effect”, their reputation, confidence in the economy, etc.

And while the Powell Put was recently found to be at 2,300, the question now is “where is the Trump put?“

According to Kolanovic’s latest note, the Trump put is only 3-4% out of the money – or barely 100 points lower – and would kick in well before the ‘Fed put’, which JPM believes is likely 10 – 15% out of the money, and which according to the latest BofA Fund Manager Survey would be triggered  at approximately 2,300. 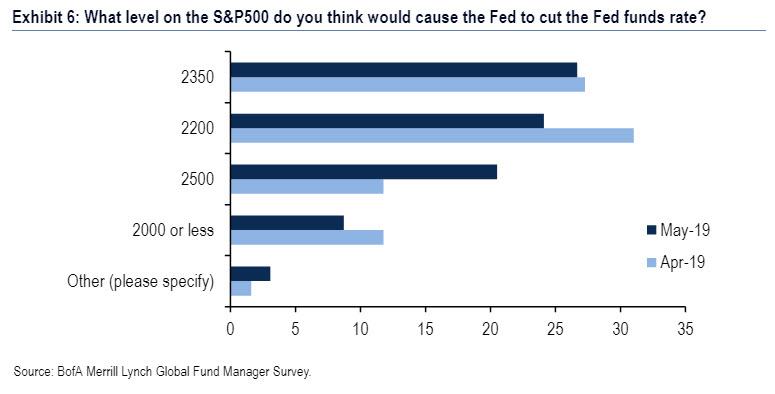 As a result, with the benefit of the Trump put floating just shy of the current S&P level, JPM’s chief quant maintains his year-end price target of 3000 for the S&P “with an expectation that trade resolution would lead to markets moving significantly above (e.g. 3200), and a complete trade breakdown would lead to the market finishing significantly below our price target (e.g. 2550).”

That said, unlike his more recent notes which were overflowing with unbridled optimism, this time Kolanovic sounds decidedly more cautious and writes that when it comes to the ongoing trade war, while a rational outcome should prevail, “regardless of our base case view, we believe investors should keep monitoring the risk of a miscalculation by either side.”