“Stairway To Seven”: Why Deutsche Expects FX Turmoil This Summer

In a lengthy FX report published this morning by Deutsche Bank strategists George Saravelos and Shreyas Gopal, the duo – which like most others on Wall Street failed to predict the escalation in trade war between the US and China – issued a gloomy prediction, namely that “rhe outlook for the summer in our FX Blueprint is not particularly bright.”

As the DB strategists admit, “two of our key assumptions from January – an easing of trade tensions and a resolution to Brexit – have not materialized” even as “geopolitical storm clouds are gathering in Iran.” And so, with Europe and especially Germany – “particularly exposed to global risks we are abandoning our positive view on the euro and see EUR/USD potentially breaking 1.10 through the summer.” As for the epicenter of the coming “war”, the bank is even more concerned on Asia, and especially China, and sees USD/CNY breaking through 7″ as the no longer “see a quick resolution to the trade war and argue that Chinese authorities will become more amenable to currency weakness.” Elsewhere, the JPY should be a continued beneficiary of global volatility and the bank also lowers it forecast there, now expecting a move down to 105 in USD/JPY. Meanwhile, in the midst of this “turmoil” EM remains vulnerable so DB prefer relative value trades with a low global beta. In all, our overall the bank’s bias is quite clear: “higher volatility and weaker risk appetite are here to stay.“

Summarizing the 13 core themes DB expects this summer, here is the rundown:

And some more details on each of these recos:

Asia is the region we expect to suffer most from the renewed global headwinds. We argue that policymakers in China are now going to be more accepting of USD/CNY appreciation through 7: years of regulatory measures should make outflows more manageable, easier monetary policy will add upside pressure and a weakening FX is the natural means of offsetting tariffs. Moves so far in USD/CNY have been proportional to the weighted average tariff being borne by Chinese exporters  with the measures currently imposed already consistent with USD/CNY at 7.10. Our preferred trade expression is short  CNH/JPY with the yen primed to benefit from global risk aversion and resumed signs of Japanese equity repatriation in recent weeks. Big picture CNH/JPY remains one of the most expensive currency crosses in the world. 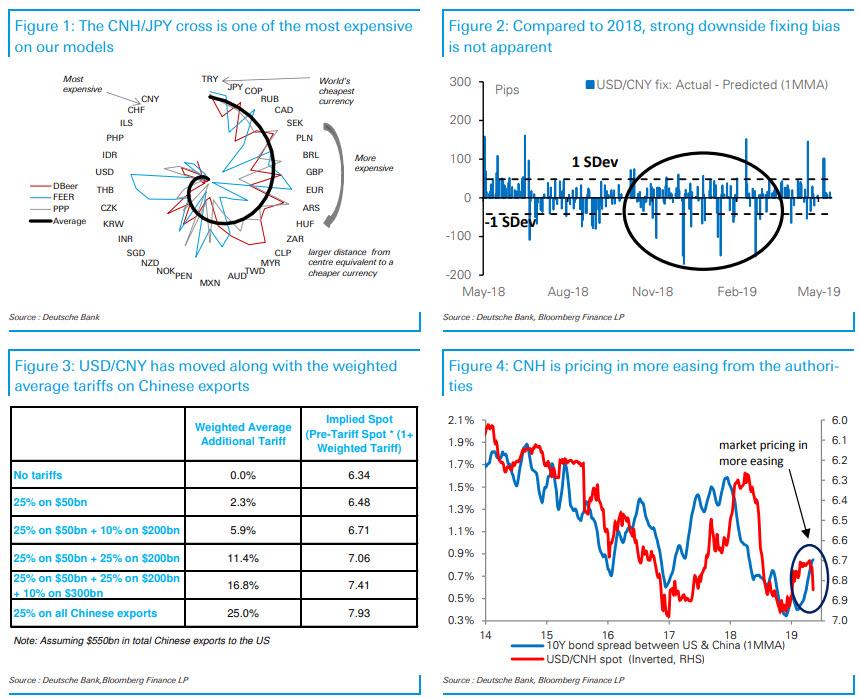 With the cyclical picture dim on multiple fronts – trade wars, Brexit and Italian risks – we see EUR/USD trying to break 1.10 over the summer though not far beyond. Why are we not even more pessimistic? First, the European balance of  payments continues to be “Japanized” with current account recycling decelerating further this year. Second, the Fed has greater potential to ease policy which should eventually be more negative for the dollar. During the last two yield curve inversions the dollar was resilient to market pricing of cuts until the Fed “delivered” on easing, causing the dollar to weaken more sharply. Third, the euro is likely to benefit from an unwind of euro funding as well as pricing some “dumping” risk of China assets. With the carry to vol ratio close to record highs, we like buying EUR/USD puts over the next four months – even a slow grind lower will make money given the elevated level of forwards. 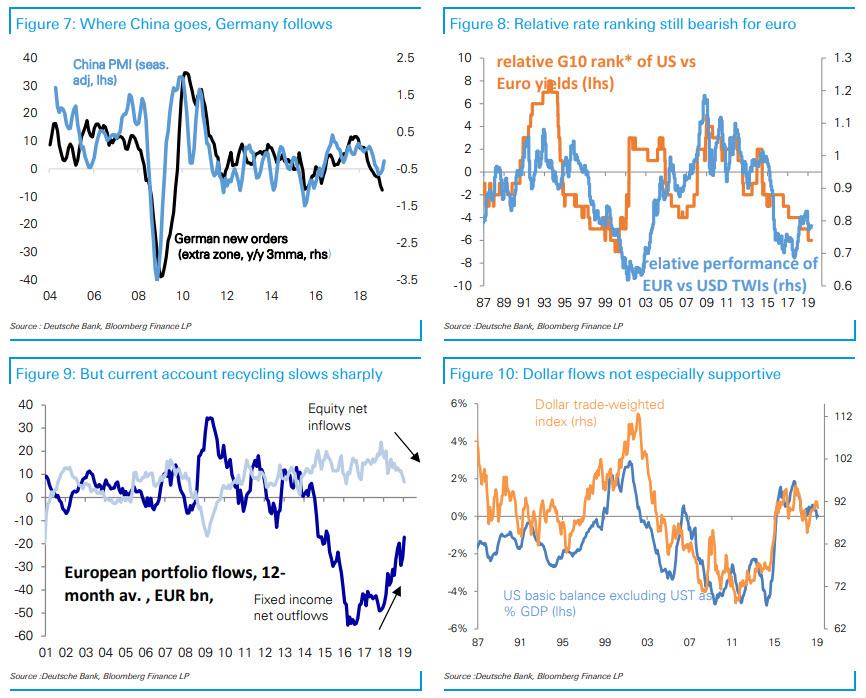 In the rest of Europe, we have turned more pessimistic on the pound. There will be no Brexit deal before the European elections next week. We see this as a catalyst for Prime Minister May’s exit and the UK government’s policy turning more hawkish. In turn, this could trigger a general election. Aside from the politics, the UK’s flow dynamics make it very sensitive to a deterioration in global risk sentiment, making short GBP/JPY an obvious expression of the trade. Another European laggard is set to be the Swedish krona, which is suffering from both structural headwinds in the form of poor Swedish productivity growth, and a weak cyclical outlook due to Germany’s manufacturing recession, so we like buying EUR/SEK. By contrast, we like selling EUR/CHF. The franc has lagged the move in bunds, and the SNB may tread lightly on intervention given the US government’s focus on currency manipulation. 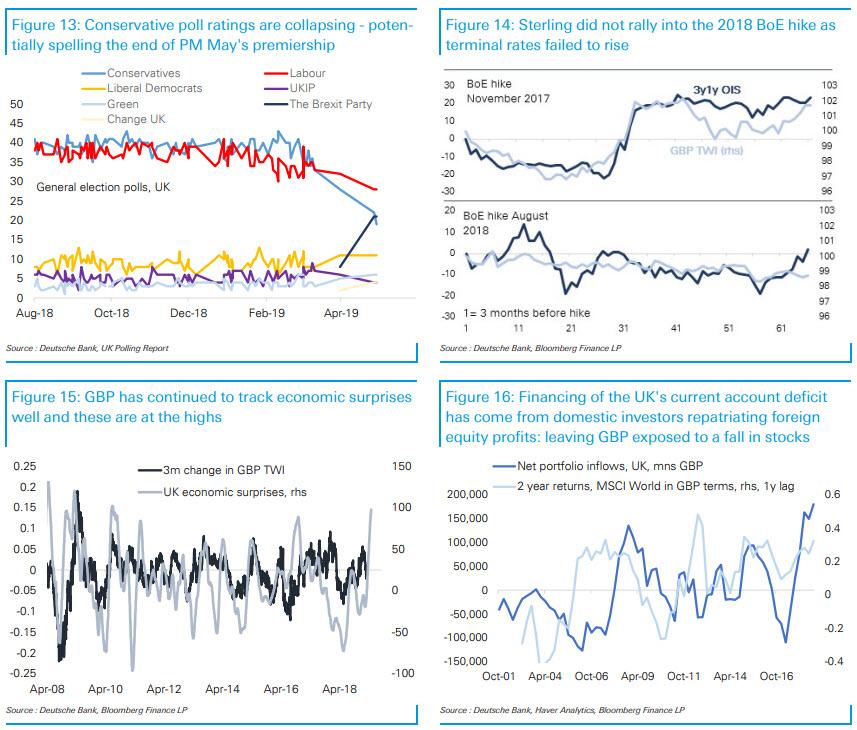 Aussie bearishness a little too much, or “The Good, the Cad, and the Ugly – buy AUD/CAD, AUD/NZD”

With the market fully pricing two cuts over the next year, the RBA is the most dovishly priced in G10 which we argue is excessive. Australian nominal GDP is handily outperforming peers, the unemployment rate is at an eight-year low and the housing story looks past the worst. Though AUD will struggle in a risk-averse background, we see it offering value against both CAD and NZD. In New Zealand we see downside risks to dairy prices and a persistently more dovish central bank while the currency remains overvalued on our traditional valuation metrics. In Canada, we see additional downside risks to the data with further headwinds from delayed USMCA ratification. With the risks to oil prices skewed to the upside but the CAD beta to oil very low, we also like buying USD/CAD calls contingent on higher oil prices. 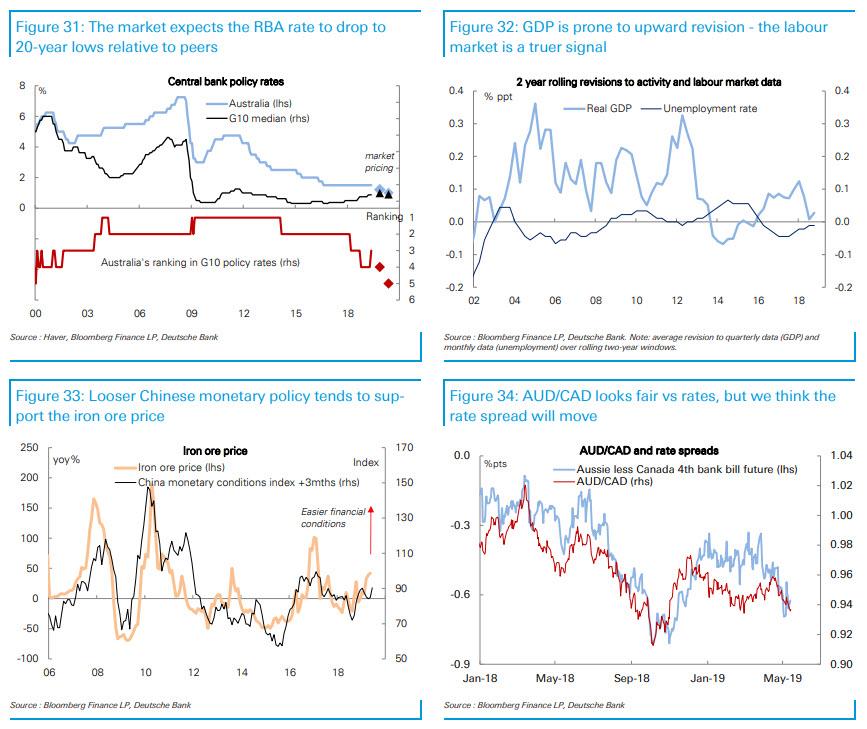 Hard to be positive on Asia, except Philippines

We like buying USD/TWD which has significantly lagged moves in Korea and China. MSCI rebalancing in favour of Chinese A-shares will drive outflows from Taiwanese equities, while Taiwan also stands to lose more if the US proceeds with tariffs on the remaining $300bn in goods, dominated by electronics. PHP is the only currency we are more positive on, with positioning relatively light, equity valuations better, the central bank cutting rates for the “right” reasons and net FDI strong. We like buying the peso against both India and Indonesia which are more heavily positioned carry trades vulnerable to negative risk sentiment. We also like selling the SGD NEER basket which remains close to the top of its band but where risks are skewed towards a more dovish central bank.

A lot of relative value in the rest of EM

We choose to fade the election relief rally in ZAR given the weak fundamental backdrop, illustrated by unfavourable BoP dynamics, fiscal erosion and low growth, while the government is unlikely to enjoy an unconstrained path to reform. Risks around SOEs’ precarious financial situations and the threat of a rating downgrade/ index exclusion will also weigh on ZAR. In the low-yielding space, we like playing for monetary policy divergence between Poland and Czech Republic as market pricing remains too dovish on Poland. PLN also ranks better than CZK on positioning and valuation metrics.

In Latam we like selling MXN/COP. Heavy positioning, mounting fiscal risks and decelerating growth all pose risks for Mexico over the summer. In contrast, cheap valuations relative to commodities, superior growth dynamics, light positioning and a positive beta to oil should favor Colombia. We also like buying the Chilean peso against South Africa for similar reasons. 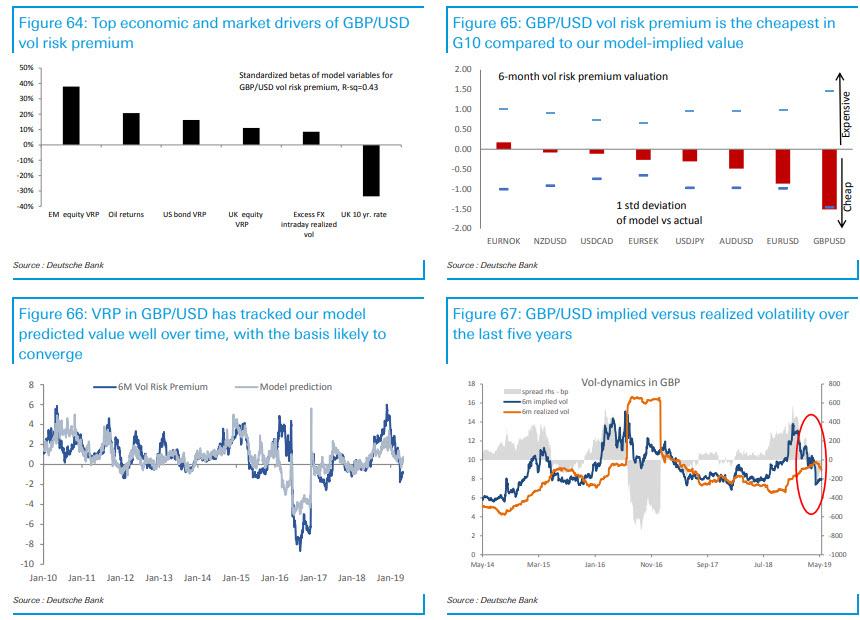 Our last Blueprint suffered from a lack of major trends in G10 FX but performed well in many of the relative value EM FX trades. The best trade was short ZAR/RUB with a profit of 8.1% while the worst trade was long AUD/USD with a loss of -3.1%. The average P&L of our trades was 0.8% with a hit ratio of 44%.