The “Wealthy” Threshold In America Is Now $2.3 Million

The term “millionaire” used to be thrown around as the definition of the “wealthy” in the United States, but that line has since been redrawn in a big way, according to Charles Schwab’s annual Modern Wealth Survey.

Now, people claim that in order to be “rich”, they need to be worth and average of $2.3 million, or “more than 20 times the actual median net worth of U.S. households,” according to Bloomberg. The number is down from $2.4 million the previous two times the survey was issued.  The survey notes that the older someone gets, the higher their bar goes for what they consider as “wealthy”. Baby boomers say you need to have $2.6 million to be “wealthy”, which is 35% higher than what millennials think.

For someone to be considered “financially comfortable” the threshold falls significantly. The average amount needed to be “comfortable” was $1.1 million, and only Gen Z believed that under a million ($909,600) was acceptable. 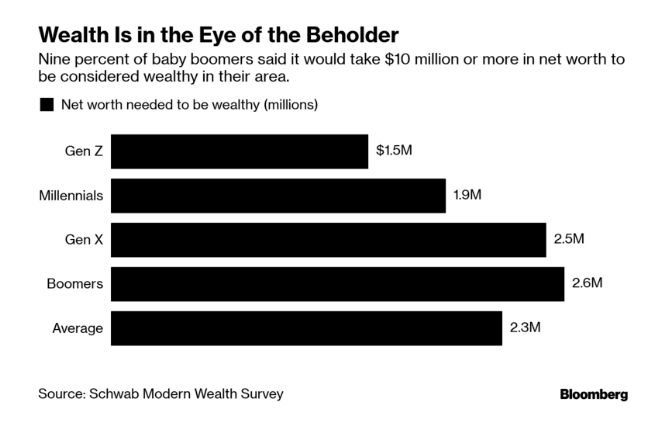 The survey sampled 1,000 Americans between the ages of 21 and 75. It also revealed that the majority of Americans “crave” real estate. More than 50% of those surveyed said that if they got a $1 million windfall, they’d spend it on real estate. This sentiment held truest particularly among millennials (roughly age 22 to 37).

More than 75% of millennials surveyed also said their personal definition of wealth was “really about the way they live their lives, rather than a discrete dollar amount.” Call us old fashioned, but we still prefer the money for our definition.

Even richer (pun intended) is the fact that 60% of these same millennials believe they will be wealthy “within 1 to 10 years”. And just wait until they find out that becoming wealthy may hinge on ignoring their friends social media posts. The survey also found that overspending on things found on social media was the largest “bad” influence on how millennials managed their money. 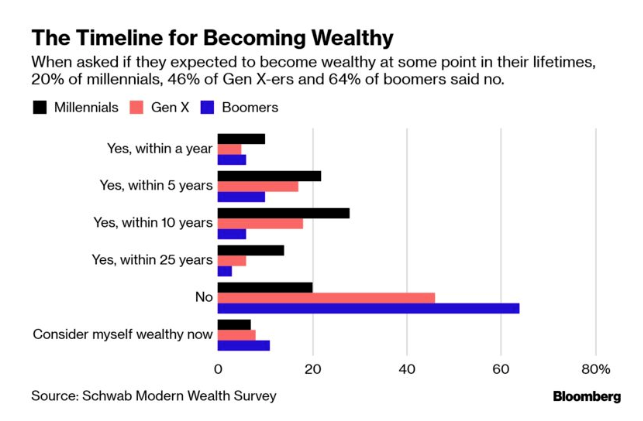 And the trend of social media influencing negative spending looks like it will only continue. For instance, Instagram said in March that it’s testing a shopping feature, which we noted in this totally serious and 100% not sarcastic article about millennials becoming friends with houseplants.

Despite their visions of grandeur, the economic “growth”, and low unemployment, 59% of those surveyed said they still live paycheck to paycheck. Meanwhile, despite the supposedly great economic data, the largest U.S. banks are seeing losses on credit cards outpace those of auto and home loans at a rate not seen in at least 10 years even as credit card interest rates are the highest in history.