For months, the Trump administration had been warning, at first, then outright threatening Turkey against following through with an agreement struck last year to purchase the advanced Russian S-400 missile defense system, and despite several “fake news” reports that Erdogan had canceled the deal with Moscow, Turkey ultimately said it would go ahead and receive the Russian missiles, demonstrative flipping off its NATO allies.

But if Erdogan was hoping that Trump would be all bark and no bite when it comes to retaliating against this painfully obvious snub of its “western” allies, well he had another thing coming.

Late on Thursday, the Turkish lira suddenly tumbled when Washington made it clear that this aggression will not stand, and the White House said it had terminated a preferential trade agreement with Turkey, finding the country no longer needed help as a developing country. However, the US did halve tariffs on Turkish steel from 50% to 25%.

Stating that Turkey received the preferential treatment in 1975 under the Generalized System of Preferences (GSP), which allows products to enter the US duty-free, US President Donald Trump said in the proclamation, “I have determined that, based on its level of economic development, it is appropriate to terminate Turkey’s designation as a beneficiary developing country effective May 17, 2019.”

“Consistent with my determination that it is appropriate to terminate the designation of Turkey as a beneficiary developing country under the GSP, effective May 17, 2019, I have determined to remove it from the list of developing country WTO Members exempt from application of the safeguard measures on CSPV products and large residential washers,” the proclamation said.

Mitigating the move, the White House also said that it will “remove the higher tariff on steel imports from Turkey” and instead impose a 25 percent ad valorem tariff on the imports from Turkey, “commensurate with the tariff imposed on such articles imported from most countries.”

White House explained that the change is due to imports of steel articles from Turkey falling by 48% in 2018, “with the result that the domestic industry’s capacity utilization has improved at this point to approximately the target level recommended” in Commerce Sec.’s report.

In March, US Trade Rep Robert Lighthizer noted the administration’s intention to remove Turkey from the list of nations benefiting from the GSP.

The announcement comes at a very painful time for Turkey, which has been gripped in a stagflationary recession since March 2019, which has sent the Lira plunging, while the country’s inflation has soared. Predictably, with traders already on edge, and looking at how the US could retaliate for Erdogan’s unwillingness to budge on the Russian S-400 order,  the Turkish lira tumbled as much as 1%, as the USDTRY spiked from 6.058 to 6.10 before recouping some losses. 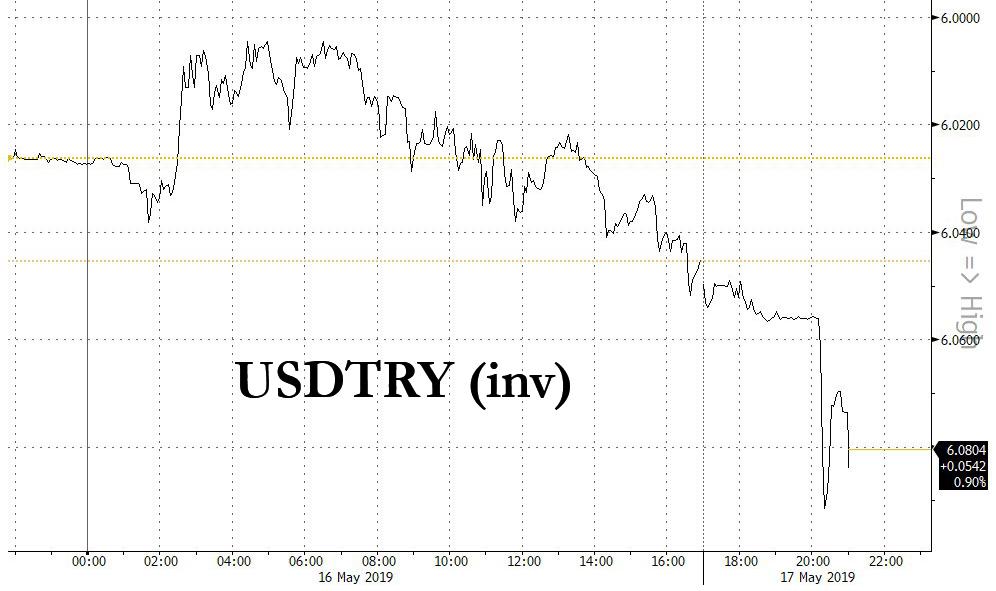 Earlier today, Moody’s warned that if the Turkish government didn’t put forward “a credible broad-based plan to address the structural issues” and avoid a downgrade, “and in the near-term dampen the market volatility pressure on the lira,” it would result in a downgrading of the country’s sovereign credit rating.

But the bigger risk facing Turkey is that the amount of foreign denominated debt repayments for the balance of 2019 exceed the nation’s entire stock of FX reserves, excluding gold.

Which means that within a few months, Erdogan may be forced to make the same choice as Venezuela: liquidate the nation’s gold ,or hyperinflate. The third option, admit defeat and beg for an IMF bailout will never happen as long as “executive president” Erdogan is in charge.