Walmart unofficially closed first quarter earnings season when it reported Q1 results that were mixed, with revenue missing and EPS beating, however the overarching concern is that Chinese tariffs could soon force the retailer to raise its famously low prices or sacrifice its bottom line.

Margins of 24.3% were in line with analyst expectations but did mark a slight year-on-year contraction. That can be attributed to higher labor costs, plus online sales that typically deliver lower margins than in-store sales due to fulfillment costs. 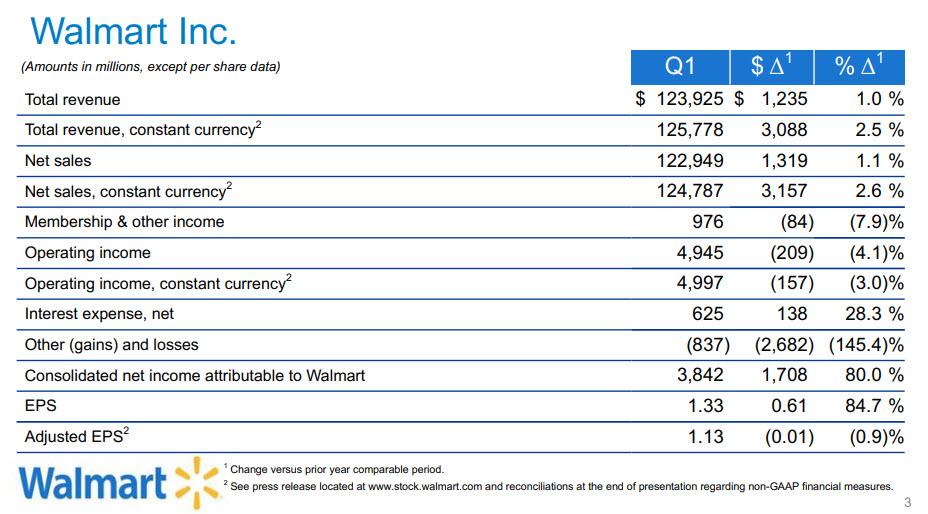 The flip side to the revenue miss is that comparable sales for Walmart store in the U.S. rose 3.4% last quarter, in line with analyst estimates, and according to the company, its best Q1 in nine years as comp ticket increased 2.3% and comp transactions grew 1.1%. As Bloomberg notes, the average ticket, or how much each shopper spent, drove the gain more than increased transactions for the fifth straight quarter, suggesting inflation is coming even to the purveyor of everyday low prices. Sam’s Club’s same-store sales fell short of estimates, dragged down by reduced tobacco sales.

Walmart said that on a two-year stacked basis, comp sales were up 5.5% and comp transactions were up 2.5%. The company also pointed out that the shift in government SNAP assistance early in the year “negatively affected Q1 comp sales by an amount similar to the benefit realized in Q4.”

Walmart eCommerce contributed approximately 140 basis points to segment comp sales growth as web sales in the U.S. rose 37%, slightly ahead of the company’s expected growth rate for the full year. As Bloomberg notes, Walmart and rival Amazon are locked in a fierce battle for internet shoppers, and both have recently pledged to speed up delivery times. While Amazon has the overall lead in e-commerce, raking in about 50 cents of every dollar spent, Walmart has the best-developed web grocery business with more than 2,400 stores offering curbside order pickup.

Meanwhile, for the purists who only care about cash flow, the quarter leaves something to be desired as Free Cash Flow dropped by more than 60%, sliding by $2 billion Y/Y to $1.358 billion as a result of big drop in operating cash flow offset by rising CapEx. This is concerning because the company spent nearly three times as much as its FCF on Dividends and Buybacks. 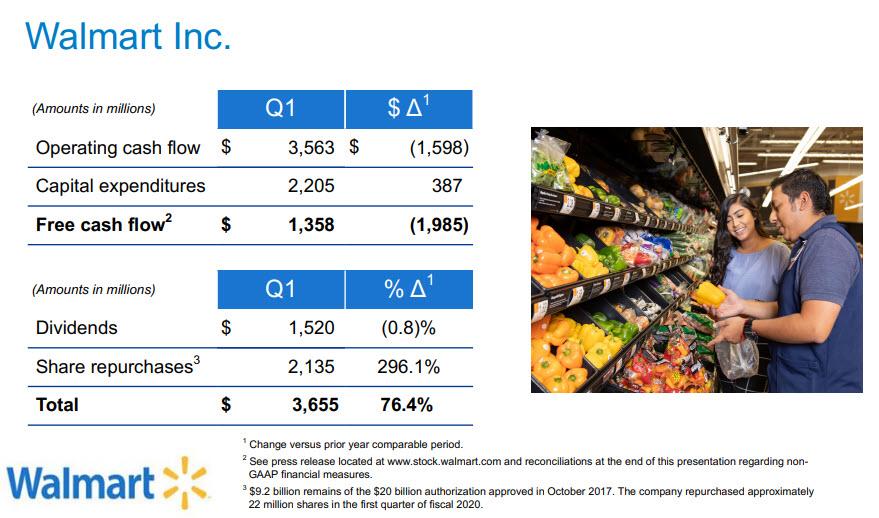 Critically, Walmart’s response to the potential higher tariffs will set the tone for other discount retailers, and its decisions on whether to pass along or absorb the additional costs will have ripple effects on American consumers. To be sure, Walmart’s market dominance and clout with suppliers gives it more room to maneuver, though, and much of its food comes from U.S. sources, easing the impact.

“We will do everything we can to keep prices low but increased tariffs lead to increased prices,” Chief Financial Officer Brett Biggssaid in a Thursday morning interview. “It’s very item and category specific. There are some places where as we get tariffs, we will take prices up.” Shifting sourcing “is one of a number of actions that our merchants are considering.”

After the report, Walmart shares swung between gains and losses in premarket trading, but were last up 2%, after climbing 7.2% this year through Wednesday’s close, compared with the 14% gain in the benchmark S&P 500 Index.