Taxpayers in America’s ten biggest cities face an average per taxpayer burden of $50,000 in debt incurred by the county, state and or “off-balance-sheet” transactions by city government entities, according to Truth in Accounting (TIA).

The taxpayer burden, TIA explains, is the amount residents would have to pay to cover all of a government’s debt. “When the unfunded debt of these underlying government units is combined with the county, municipal, and state debt, city taxpayers are on the hook for much more than they think,” according to TIA.

The cities are ranked from top to bottom, on net position, explained Bill Bergman, director of research for TIA. “And it’s on that basis that Chicago ranks dead last,” he said.

Chicago taxpayer burden equates to $119,110 in debt per taxpayer, a number that includes debt from Chicago Public Schools (CPS) and the state of Illinois. Bergmans said the most significant burdens on taxpayers is from CPS. He added, CPS has separate financial ledgers.

“As bad as the picture is for the city, you add a significantly higher debt load once you include the Chicago Public Schools,” he said. 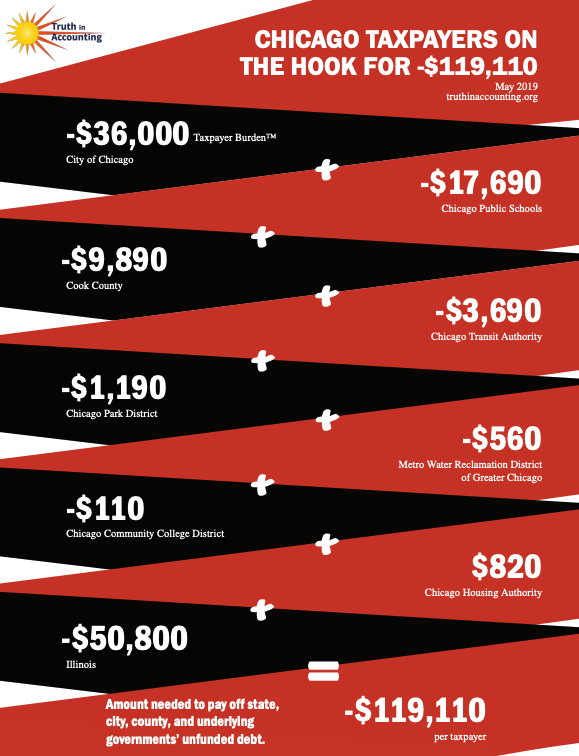 The massive debt load could affect Chicago’s S&P Global Ratings, was warned several years ago that its rating could sink into junk unless it passes a budget that addresses the fiscal situation.

“Taxpayers are on the hook for the debts accrued by these underlying government entities, but you would not know it just by looking at the reported data for the city,” the report states. 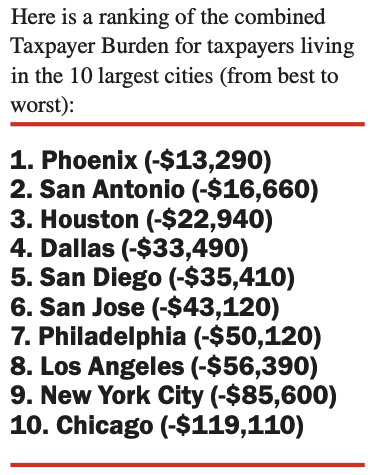 “The debt facing school districts in Dallas, Houston and San Antonio don’t add nearly as much to the total debt burden facing taxpayers in those cities as most others of the largest 10 cities we studied,” Bergman added. “Still, one might have expected better overall financial conditions for those Texas cities in light of economic and demographic trends in the last decade.”

For these cities to pay off its debt, each taxpayer would need to fork over around $50,000 each. Zerohedge readers understand, 60% of millennials don’t have $500 in savings ahead of the next recession. So obviously this deadbeat generation that is expected to take over the workforce by 2024 won’t have the ability to bail out America’s deadbeat cities in the next downturn.

Which leaves us with the question of the day: Will the Federal Reserve bailout heavily indebted cities in the next crisis?