At the end of a week that’s witnessed a dangerous US military build-up in the Persian Gulf amid anti-Iran war rhetoric, Exxon Mobil has evacuated all of its foreign staff from Iraq’s West Qurna 1 oilfield, flying them to Dubai until “the situation is secure,” according to a company statement.

Total staff evacuated is about 60, cites Reuters, and comes days after the US ordered all non-emergency personnel to leave the US embassy in Baghdad in an extremely rare security move, claiming intelligence that shows Americans are under immediate threat from Shia milias backed by Iran.

Iraq’s state-owned South Oil Company, which owns the oil field from which the Exxon Mobil employees have been evacuated, announced Saturday that production is continuing without disruption at 440,000 barrels per day (bpd) under the operation of Iraqi engineers.

“Exxon Mobil’s evacuation is a precautionary and temporary measure. We have no indication over any dangers, the situation is secure and very stable at the oilfield which is running at full capacity and producing 440,000 bpd,” a South Oil spokesman said.

And Exxon Mobile in a separate company press release said, “ExxonMobil has programs and measures in place to provide security to protect its people, operations and facilities. We are committed to ensuring the safety of our employees and contractors at all of our facilities around the world.” 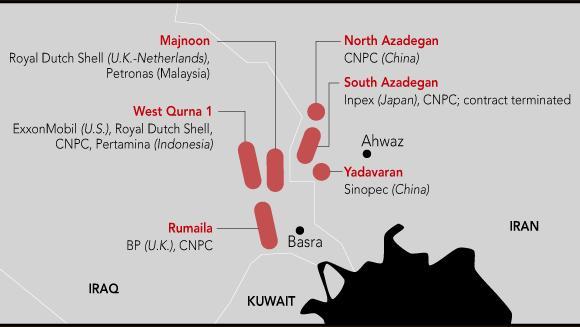 The evacuation was reportedly completed early on Saturday in phases which had started on Friday: “Last night 28 employees were evacuated to the airport and the rest were sent to the camp. This morning they were evacuated to the airport and no (foreign) staff remain in the field,” according to a security firm which oversaw their emergency departure.

South Oil company in a separate statement noted Iraq’s oil exports through its southern ports stood at 3.5 million bpd by Saturday, amid fears that a conflict between Iranian and US warships could choke global shipping through the vital Strait of Hormuz.