Authored by Jesse Colombo via RealInvestmentAdvice.com,

Art and collectibles prices have exploded in the past decade as a result of the extremely frothy conditions created by central banks. Hardly a week goes by without news headlines being made about ugly, tacky, or just plain bizarre works of art fetching tens of millions, if not hundreds of millions, of dollars at auction houses like Sotheby’s and Christie’s (often sold to rich buyers in China or Hong Kong). Make no mistake: we’re currently experiencing a massive art bubble of the likes not seen since the Japan-driven art bubble of the late-1980s that ended disastrously. Two art market records were made in the past week: the $91.1 million “Rabbit” sculpture by Jeff Koons, which set the record for the highest amount paid for a piece of art by a living artist, and the sale of Monet’s ‘Meules’ painting for $110.7 million, which set a record for an Impressionist work.

The New York Post reports on the Koons sale –

A sculpture of a silver rabbit by artist Jeff Koons sold at Christie’s auction house in Manhattan Wednesday for $91.1 million, setting the record for the highest amount fetched for a piece of art by a living artist.

Koons’ “Rabbit” surpassed the previous record, which was set just last November when British painter David Hockney’s “Portrait of an Artist (Pool with Two Figures)” sold for $90.3 million. Both totals include the auction house fees.

Art dealer Bob Mnuchin, the father of Treasury Secretary Steven Mnuchin, made the winning bid for the Koons work, Bloomberg reported. Mnuchin made the purchase for a client, according to the report.

The sculpture, which stands just over 3 feet high, is made of stainless steel and based on an inflatable children’s toy, according to the auction house.

“Rabbit” by Jeff Koons is displayed at Christie’s in New York on May 3, 2019. Photo credit: AP

Reuters reports on the Monet sale –

One of the few paintings in Claude Monet’s celebrated “Haystacks” series that still remains in private hands sold at auction on Tuesday for $110.7 million, setting a record for an Impressionist work.

The oil on canvas, titled “Meules” and completed in 1890, is the first piece of Impressionist art to command more than $100 million at auction, said Sotheby’s, which handled the sale.

That also represents the highest sum ever paid at auction for a painting by Monet, the founder of French Impressionism and a master of “plein air” landscapes who died in 1926, aged 86.

“Meules” was one of 25 paintings in a series depicting stacks of harvested wheat belonging to Monet’s neighbor in Giverny, France.

The works are widely acclaimed for capturing the play of light on his subject and for their influence on the Impressionist movement.

“Meules” by Claude Monet is displayed at Sotheby’s New York on May 3, 2019. Photo credit: Reuters

Today’s art bubble (like many other bubbles that are currently inflating) formed as a result of the Fed and other central banks’ extremely loose monetary policies after the Great Recession. In a desperate attempt to jump-start the global economy again, central banks cut and held interest rates at virtually zero percent for much of the past decade. The chart of the Fed Funds rate below shows how bubbles form when interest rates are at low levels: 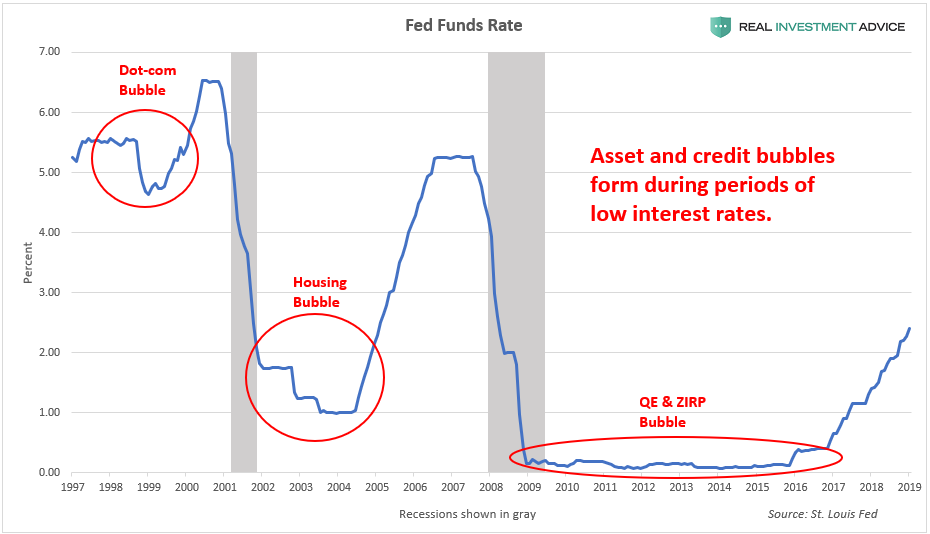 In addition to holding interest rates at record low levels for a record length of time, central banks pumped trillions of dollars worth of liquidity into the global financial system in the past decade:

Assets around the world – from art to stocks to property – have been levitating on the massive ocean of liquidity that has been created by central banks. For example, the S&P 500 has soared 300% since its low in early-2009:

In order to understand today’s art bubble, it is helpful to learn about the art bubble of the late-1980s that ultimately crashed and burned. Throughout the 1980s, Japan had a bubble economy that was driven by debt and bubbles in property and stocks. Japan’s economy was seemingly unstoppable – almost everyone in the West was terrified that Japan’s economy and corporations would trounce ours while destroying our standard of living in the process. Of course, few people knew how unsustainable Japan’s economy was at that time.

As a result of hubris and the enormous amount of liquidity that was flowing throughout Japan’s economy in the late-1980s, Japanese businesspeople and corporations started to speculate in art, often bidding previously unheard of sums that Western art collectors would never have dreamed of paying. For example, Yasuda Fire and Marine Insurance paid a record $39.9 million for Vincent van Gogh’s “Sunflowers” at a London auction in 1987. Ryoei “wild fellow” Saito, Chairman of the Daishowa Paper Manufacturing empire, paid $160 million for the world’s two most expensive paintings – a Van Gogh and a Renoir. At the peak of the art market in 1990, Japan imported more than $4 billion worth of art, including nearly half of all Impressionist art that was on the market. Of course, the art market plunged along with Japan’s bubble economy in the early-1990s.

Unfortunately, today’s art bubble will burst just like the art bubble of the late-1980s. China, with its massive debt bubble, is currently playing the role that Japan played in the Eighties. While most people are probably not worried about the coming art market bust and won’t be directly affected by it, the point of this piece is to show how the art market acts like a barometer for the amount of froth there is in the global economy and financial markets. When the art market goes ballistic, that is typically a sign that the economic cycle is in its latter stages. We are fast approaching a time when art speculators will deeply regret paying $91.1 million for a steel rabbit sculpture and tens of millions of dollars for Simpsons art.