Will The Fed Help Trump Fight His Trade War?

Authored by Benn Steil and Benjamin Della Rocca via Council on Foreign Relations,

In a tweet on May 14, President Trump called on the Fed to “match” interest-rate cuts he expects from China “in order to make up for the business they are . . . losing” from his tariffs. But the Fed appears to be in no rush to oblige him. After the May FOMC meeting, Fed chairman Jay Powell opined that recent declines in inflation were “transient” and predicted that “inflation will move back up.”

In this post, we look at one important leading indicator of inflation: wages. Wage data are important because producers tend to raise prices to offset rising labor costs. 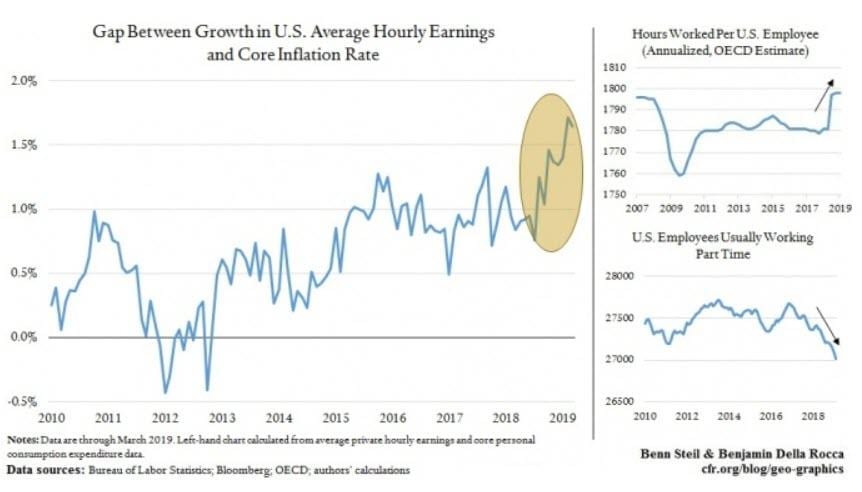 One possible objection to our analysis is that we’ve failed to account for the possibility that discouraged workers, attracted by rising wages, will return to the labor force and drive wages back down. Yet we see no signs of this happening. According to OECD hours-worked estimates, the average U.S. employee now works more than at any time in the last decade—as shown in the top-right chart.

Further, as the bottom-right chart shows, U.S. part-time employment is falling, even as total employment rises. These facts suggest that employers are being forced to squeeze more work out of existing workers, and that prices must rise to bring the gap with wages back down to more normal levels.

And this fact, in turn, suggests that the Fed won’t be helping Mr. Trump fight his trade war.