California’s housing affordability crisis is getting worse. Affordability in San Francisco is now at 10-year lows, and only one in five households can afford to purchase a median-priced single-family home in the Bay Area. The crisis has driven many people onto the water, living on makeshift boats, outside marinas, and wealthy communities.

The floating homeless population in wealthy Marin County, just across the Golden Gate Strait from San Francisco, has doubled in the last five years to over 100. The community of 200 barges, sailboats, and other vessels comprise of people who are employed but can’t afford to live on land, jobless folks, the homeless, and some people who are mentally ill. Boat life for them isn’t easy:

“It’s not a free ride. It’s a lot of effort to be out here,” said Kristina Weber, who moved onto a 54-foot vessel she purchased for $15,000 because she couldn’t afford to rent in Sausalito.

Wealthy people on land warn that the floating homeless community is devastating for their community. Weber and her neighbors told The Wall Street Journal these people have brought crime and poor sanitation to their area.

Residents complain that boats sometimes break away from anchor lines in storms, drift into waterfront homes, causing tens of thousands of dollars in damage.

Local authorities have called these seafaring homeless “anchor-outs,” because they permanently anchor their vessels outside marinas and shore communities that is a direct violation of the law. Floating homeless communities have also sprung up in overpriced coastal regions from Fort Lauderdale, Fla., to Honolulu, Hawaii. 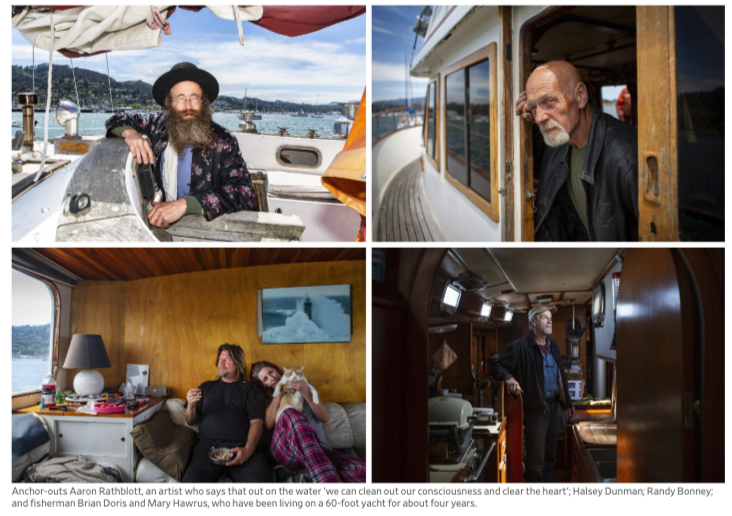 “They are taking over a public resource,” de Lappe said.

Beth Pollard, executive director of the Richardson’s Bay Regional Agency, said many of these floating homeless communities started showing up in the waters between the Marin County cities of Sausalito and Belvedere in the last several years.

Pollard and her organization aren’t pushing these folks away from the area, but instead helping them secure their boats to more stable anchors.

Jim Robertson, a homeowner in Marin, said these boats have collided with his shore home 16 times over the last two decades, including one time that cost $20,000 to repair his dock.

“Nobody is looking for special treatment, just the enforcement of laws on the books,” Robertson said. 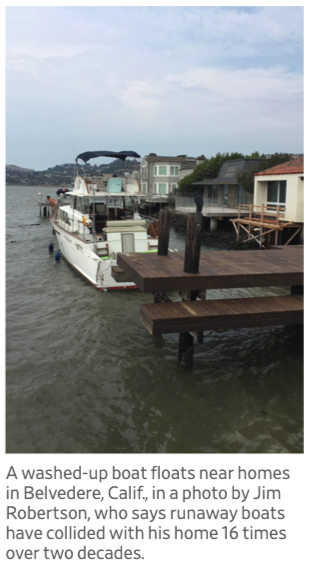 His neighbor, Connie Strycker, said the homeless would paddle ashore in dinghies asking for food and water. “They’re all filthy, because they have no place to bathe,” said the 86-year-old.

Sausalito Police Chief John Rohrbacher said many of the homeless are inexperienced on the water.

Weber said living on the water is very difficult. The 40-year-old uses a dinghy to travel to shore for supplies.

Greg Baker, who lives alone in a 41-foot sailboat, has been on the water longer than anyone in the Marin area. The former tugboat captain said there are too many homeless people on the bay operating vessels with no experience at all. 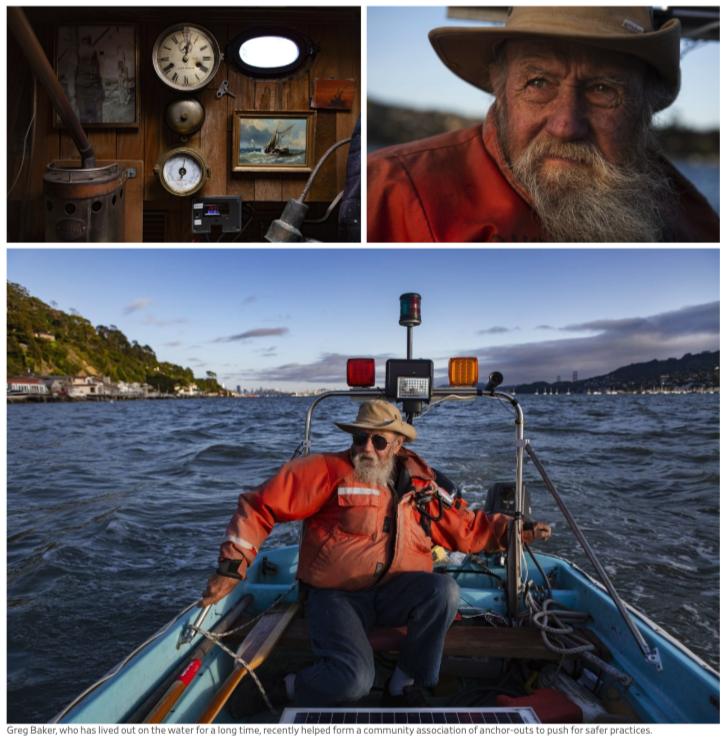 Baker is leading an effort through a community association to educate the homeless on how to become better operators on the water.

He said that moving isn’t an option for him.

“There are two ways I’m leaving: in a black body bag or handcuffs,” said the 80-year-old.

While many San Franciscans cannot afford overpriced homes, this latest trend of housing communities springing up on the water with ragtag vessels is a sign of the times: the housing affordability crisis is progressively getting worse.