Chris Wood: Economists Think Inflation Has To Be Avoided – It Doesn’t

Submitted by Chris Wood, via Grizzle

The focus of financial markets this week has again been the U.S.-China trade deal triggered by the much Twitter-driven news dynamic courtesy of the Donald. But the issue of the Federal Reserve also remains important.

A CENTRAL BANK OBSESSED WITH INFLATION

My view has been that Fed Chairman Powell’s efforts to normalize U.S. monetary policy since he assumed the Fed chairmanship in February 2018 have been commendable in the sense that interest rates have been raised more than would have been expected when previous Fed chairwoman Janet Yellen began rate hikes in December 2015 while the Fed balance sheet has actually contracted. But this is said from the standpoint of an observer with “Austrian” tendencies who does not believe in the quackery of quanto easing, and who also does not believe that “deflation”, in the form of negative CPI, is the root of all evils that has to be avoided at all costs, even to the point of totally manipulating the level of interest rates.

But devotees of Austrian economics, such as myself, are not yet running U.S. monetary policy, though by the recent standards of the Fed the Donald recently nominated some controversial candidates to the American central bank who would at the very least have livened up the Fed’s internal debates. It is, therefore, a bit of a pity that Stephen Moore’s and Herman Cain’s nominations to be Fed governors have now been withdrawn as a result of loud objections, including from some Republican Congressmen.

But returning to the main point, the academic egg heads who currently dominate the intellectual debate at the Fed, influenced as they are by both monetarist and Keynesian stereotypes, continue to believe that deflation is to be avoided at all costs. This leads to an abiding obsession with monitoring “inflation expectations” and the like.

Meanwhile, returning to the subject of the Donald’s refreshing, albeit failed, attempt to get some new blood inside the Fed, thereby diluting the egg heads, I have to comment on a hysterical “leader” in The Economist last month prompted by this issue (“Interference Day – The independence of central banks is under threat from politics” (paywall), April 13, 2019).

The editorial argues sanctimoniously that the independence of the central banks is threatened by Trump’s nominations and “that is bad news for the world”. Apart from the obvious point that G7 central banks have never in reality been truly independent, as also noted here recently (Under the veneer or the ‘unbreakable’ US consumer, May 1, 2019), The Economist really seems to believe that central bank independence is the main reason for the disinflationary trend for the past nearly 40 years in the G7 economies.

True, the high inflation of the late 1970s was cracked by an independent central banker, namely former Fed chairman Paul Volcker. But he was one of a kind, who was prepared to raise rates from 9% to 20% between July 1980 and June 1981 to counter then serious inflation despite the obvious hit to the American economy this entailed (see following charts). Since then the key reason for the disinflationary turned deflationary trend still in evidence today has been the powerful combination of three long-term secular trends: rising debt levels, aging demographics, and the explosion of information technology and related digitalization.

Central bank actions are, by contrast, much less powerful. Indeed G7 central banks’ attempts to revive inflation at the consumer price level via quanto easing and other irresponsible gimmicks over the past ten years and more have been an abject failure, though not clearly when it comes to asset prices. Meanwhile, by providing incentives for debt levels to grow ever higher via years of unorthodox monetary policy, central banks are aggravating the very deflationary trend they are trying to address. It is really quite comical, and indeed sad, that the great and the good at establishment organizations like The Economist have seemingly not worked this out yet. 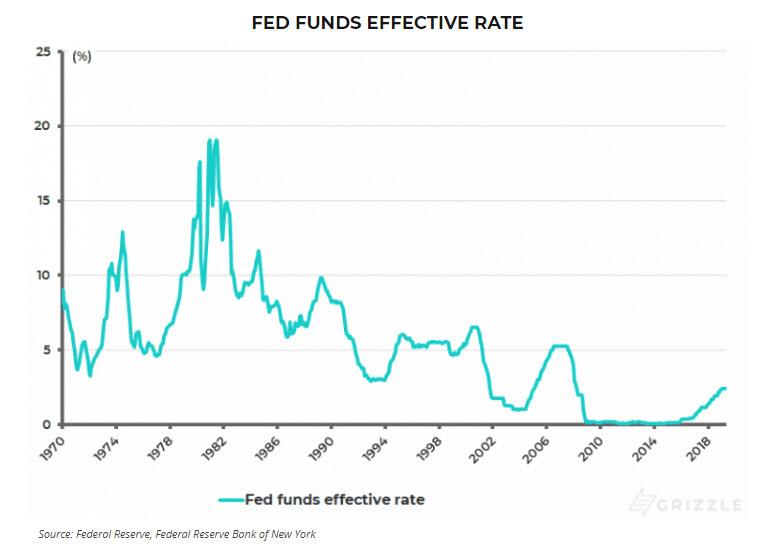 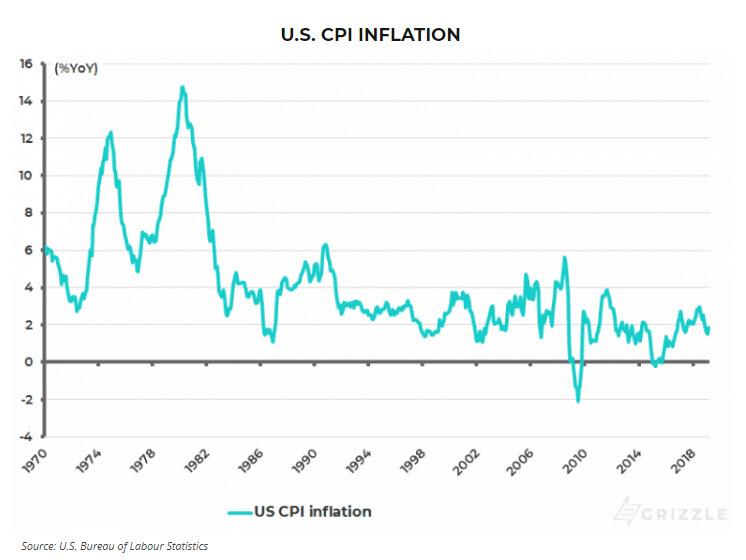 The reality is that if inflation does suddenly return, it will only be by a change in mass psychology which causes velocity, or the turnover of money in circulation, suddenly to surge. At that point the surge in narrow money supply of the past ten years, with monetary base rising from US$900 billion in September 2008 to US$3.3 trillion in April 2019 (see following chart), will act like kindling wood on a fire.

But for now at least, the long-term velocity trend continues to be weak, though the M2 velocity (measured as the nominal GDP/M2 ratio) has of late risen marginally from 1.433 in 3Q17 to 1.458 in 1Q19 (see following chart). Meanwhile, gold remains the best way of hedging the risk of such a pickup in velocity. 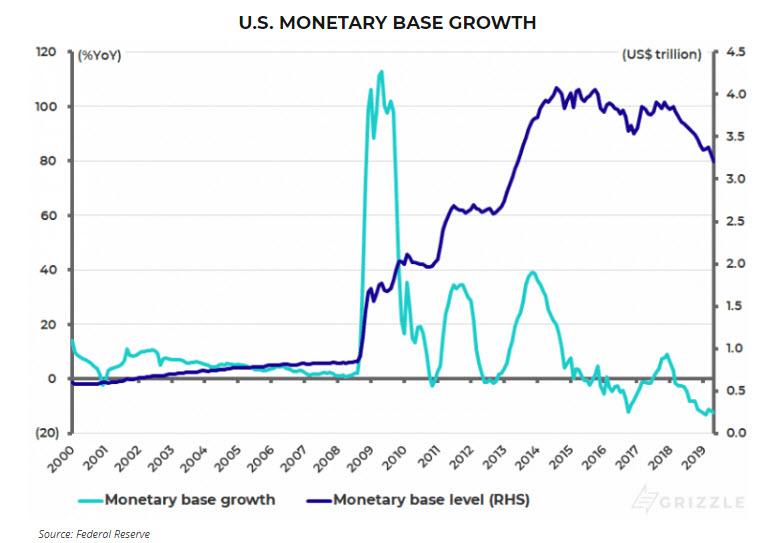 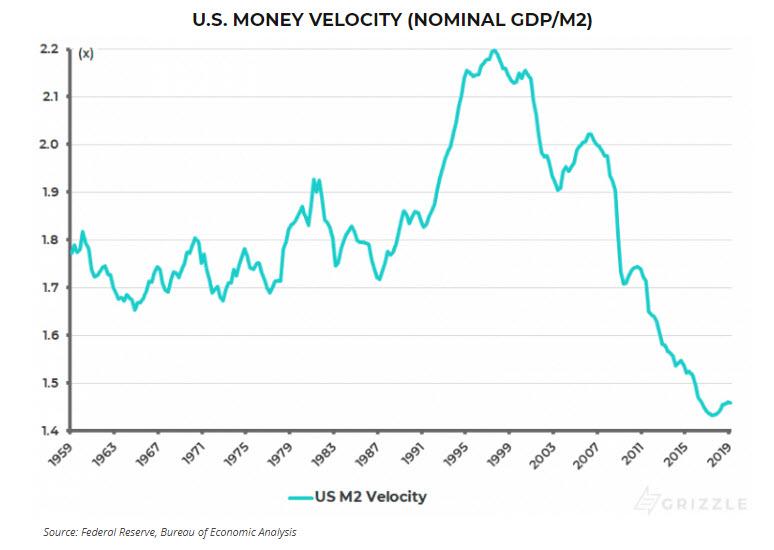