Wall Street’s Most Bearish Analyst Asks “What Did I Miss”

As a macro strategist, my job is to try to make a very complex world easier to understand – something that’s very difficult to do. In an era of financial repression and seemingly elevated political uncertainty, the level of complexity has felt elevated too. This has created great opportunities for the past several years as a macro strategist – first to be more bullish than the consensus in 2016-17 when markets were overly worried about the outcomes, and then last year to be more bearish when risks were priced out.

On the surface, 2019 has been much easier, with the consensus generally getting it right to be more bullish on risk assets as the Fed pivoted aggressively and valuations had a long way to recover. While I was on board with this bullish outlook earlier in the year, I underestimated how far the revaluation would go.

What did I miss? Mainly, I interpreted the fall in global long-term interest rates to their lowest levels since 2016 as a confirming signal that growth would disappoint investors and not reaccelerate in the second half of the year. Instead, equity markets have generally dismissed the potentially negative growth signal from lower long-term interest rates and taken the lower rates as simply a positive for equity valuations. As always, the answer is probably somewhere in between – lower rates are likely a negative for growth and a positive for valuations.

An alternative observation about the different messages between equity and bond markets is that equity markets may not be sending such a strong signal about growth as one might interpret from just looking at the price level of the S&P 500. We’ve been noting for months that equity markets continue to trade very defensively under the surface. Specifically, low-quality cyclical stocks have rallied very little from their December lows while defensive sectors and high-quality stocks are well above their all-time highs reached last year. To that point, many readers might be surprised by the fact that since last summer Utilities has been the best-performing sector, followed by Real Estate  and Staples (see Exhibit). Furthermore, that defensive sector relative performance has widened during the recent trade- induced correction. Meanwhile, small caps have performed terribly along with cyclicals. Indeed, equity and bond markets  may not be as far apart as it might seem on the surface. Instead, what we have is a very bifurcated equity market that  is paying up for high-quality and defensive stocks while discarding anything with low-quality cyclical assets. Such a  condition can definitely persist if growth stays low but we don’t slip into an economic recession.

I’ve been vocal about my view since last September that the US was likely to experience an earnings recession in 2019. Some jumped on the earnings recession bandwagon in December, looking for a narrative to explain why equity markets were in freefall. But, with the S&P 500 making new highs last month and actual 1Q earnings growth coming in closer to zero rather than the forecast -4%Y, the earnings recession risk has suddenly been declared over. However, our models continue to suggest that negative earnings growth is still likely over the next 12 months and I still see three major excesses from last year that need to be purged from the economy.

Unfortunately, the re-escalation of US/China trade tension increases the likelihood of this bad outcome, in the event that it can’t be resolved in a few months. 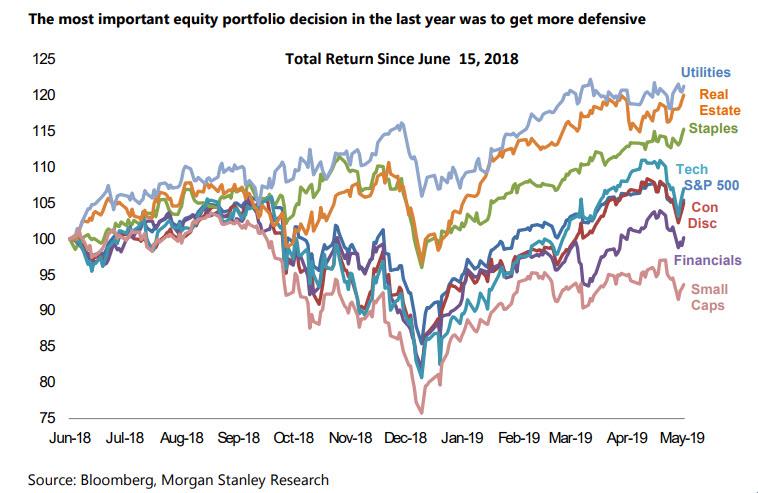