After “Hammer Blow” From Google, A “Paralyzed” Huawei Scrambles To Develop Its Own OS

On Monday, Beijing woke up to a new, and far more dire trade war reality for its flagship telecom company: Google which in 2005 bought Android, whose software has since become the most popular mobile operating system in the world, said it would stop supplying Huawei with Android software in order to comply with a US government ban.

Speaking to the FT, Tim Watkins, head of Huawei in Western Europe, said the company had been “astounded” by the ban, but said Huawei was “as well prepared as we could have been.”

Perhaps… yet even so analysts said being cut off from Android was what the FT dubbed “a hammer blow” to a company whose smartphone business has been soaring in recent years, and rose 50% year-on-year to 59 million in the first quarter, while its rivals Samsung and Apple dropped 10% and 23% respectively. In all of 2018, the company shipped some 200 million smartphones, most of them preloaded with Android software. 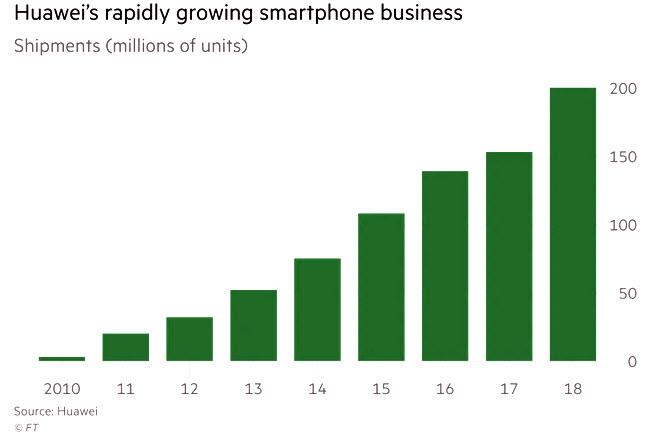 “Huawei seemed to have unstoppable momentum but with one single blow this could undermine their ambition to become the world’s largest smartphone maker,” said Ben Wood, principal analyst at CCS Insight. Another telecom consultant quoted by the FT, said that the move by Google was the clearest sign yet that Huawei’s partners are “abandoning ship”. He predicted that Washington would begin to “really squeeze the supply line properly now”.

Even without further squeezing, Huawei is in deep trouble: the world’s second-largest smartphone maker is already facing the prospect of being shut out of the world’s most popular smartphone operating system after being placed on a “banned entity” list by the White House, which forbids US companies to supply it with technology.

But with China reportedly being the party that instigated the collapse in trade negotiations in their late stage, surely Beijing, and Huawei was prepared for this contingency?

According to a separate report by the FT, Huawei said “it will be able to roll out its own mobile phone operating system “very quickly” if its smartphones are cut off from Google’s Android software.”

Which they now are. And while Huawei is confident that it will have its own (reverse-engineered knock off) operating system “soon”, the bottom line is that the Chinese telecom giant has no Plan B available right now.

This is a major problem for the company which on Tuesday will launch its new flagship Honor phone in London. But, as the FT reports,  “networks such as Vodafone and EE are reviewing whether they can press ahead with Huawei handsets at the heart of their launch strategy for 5G, the next generation of mobile internet.”

Scrambling to find alternatives, Huawei has promised its customers that their current phones would continue to work, and have access to Google’s Play Store to buy apps, although it is unclear based on what it can make such a representation. Indeed, as Tim Watkins warned: “The future is not so certain.” Huawei has cast itself as the victim of the ongoing trade war between the US and China, and Watkins said the company was “caught in the middle”.

Watkins also said the group had been preparing for the worst, after becoming a target for the US last year, and that it had been working on its own operating system, which “can kick in very quickly”. He noted that the OS has been trialled in some parts of China.

It was unclear if the name of the new OS will be iSpy 1.0.

Joking aside, creating a new operating system is not a trivial matter: China’s online retail giant, Alibaba, tried to build “China’s Android” but ended up locking horns with Google over just how different its Aliyun OS was from Android. Its successor, ALIOS, is based on Android. Similarly, Samsung has failed to gain much traction for its Linux-based Tizen operating system.

Huawei, which in addition to Android on mobile phones uses Microsoft’s Windows on its laptops and tablets which will likely be targeted next, has long sought to develop its own operating systems. In an interview with Germany’s Die Welt newspaper, and subsequently confirmed by Huawei, Richard Yu, chief executive of the consumer division, said the company would “be prepared” in the event of any blacklisting.

“That’s our plan B. But of course we prefer to work with the ecosystems of Google and Microsoft,” he told the German publication in March. Microsoft declined to comment.

Adding to Huawei’s headaches, the company relies on chips made by Qualcomm and Intel and following earlier news that these US tech giants may be next to shut off supplies to Huawei, Watkins said the company has stockpiled five years of spare parts for its phones and one year’s worth of components.

To be sure, the worst case scenario could result in a far more dire outcome: if Google blocks Huawei from Android, which is used on nearly three-quarters of the world’s mobile phones and offers more than 2.5m apps, the Chinese company will still be able to use the basic, open-source version of the software.

But its future smartphones may lose access to apps including YouTube, Gmail and Maps, and to the Google Play store and to security updates. This is likely to have a severe effect on their attractiveness to consumers outside of China, where many Google apps are already banned.

The hit to the company’s top and bottom line would be severe: while Huawei does not break out its smartphones business, last year it said that the consumer business contributed 48% of company revenue. Richard Windsor, an independent analyst, said losing the Google ecosystem “is very likely to cost Huawei all of its smartphone shipments outside China” — which, according to data consultancies including Counterpoint Research, is about half its total.

… as the company’s offshore creditors flee for both fundamental reasons, as the company’s cash flow is expected to grind to a halt, as well as concerns they may be forced to liquidate any securities belonging to the Chinese telecom.

Saxo Bank’s head of equity strategy, Peter Garnry, said Google’s move was “the starting signal of a technology cold war”, adding: “What we are witnessing is a potential reconfiguration of global trade.” Although, in an ironic twist, the strategist believes that “US companies with significant revenue exposure to Greater China (both the mainland and Hong Kong) are the ones facing the most downside risk from any further escalation of the trade war.”

If Garnry is correct, watch for China to do everything in its power to respond by hitting the US where it hurts the most: the sale and production of iPhones. We can only wonder if Tim Cook will be as unprepared as Huawei is, when China blocks not only the sale of iPhones and apps on the mainland, but also bars all the assembly of iPhones for the foreseeable future…